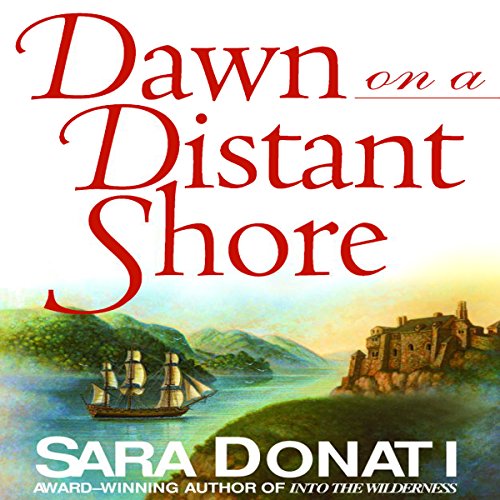 Dawn on a Distant Shore

Elizabeth and Nathaniel Bonner have settled into their life together at the edge of the New-York wilderness in the winter of 1794. But soon after Elizabeth gives birth to healthy twins, Nathaniel learns that his father has been arrested in British Canada. Forced to leave Hidden Wolf Mountain to help his father in Montreal, Nathaniel himself is imprisoned and in danger of being hanged as a spy.

In a desperate bid to save her husband, Elizabeth bundles her infants and sets out through the snowy wilderness and across treacherous waterways on the dangerous trek to Canada. But she soon discovers that freeing her husband will take every ounce of her courage and inventiveness - and will threaten her with the loss of what she loves most: her children.

Torn apart, the Bonners must embark on yet another perilous voyage, this time all the way across the ocean to the heart of Scotland, where a destiny they could never have imagined awaits them....

Would you listen to Dawn on a Distant Shore again? Why?

Probably not, the story is not that complex. The story is forced in some areas.

What made the experience of listening to Dawn on a Distant Shore the most enjoyable?

I read reviews about people not liking the second book as much as the first, but they never take into account that the first book is new, is an unknown story line, unknown characters etc. You have to go into the second book with that awareness. I really loved that this book picked up right where the last book left off. I loved the real emotions I felt when reading this. Genuine anger, happiness and one moment of utter shock and heartbreak. I love when I can feel the book and this one, like the last, gave me that.

I love all the characters, but who's favorite ISN'T Robbie!? He's just that lovable guy that is always there and cares way more for others than himself.

Definitely worth the read. I'm alternating between this series and "The Tea Rose" series (If you haven't read it, DO!!!) and I'm much anticipating returning to Elizabeth and Nathanial and family!!

Enjoyed but not loved.

I enjoyed this book but it seemed to drag on and on, and it bothered me that some of the things that happened to these two just seemed ridiculous. Why can't they seem to stay out of trouble? lol However, I suppose if they did then we wouldn't have a book, would we? I'm not sure I'll listen to the remainder of the series because what more could happen to them?

The Second Tale of the Bonners

This is the second novel in the series of six "wilderness" novels written by the author. In order, for your reference: Into the Wilderness, Dawn on a Distant Shore, Lake in the Clouds, Fire Along the Sky, Queen of Swords, and The Endless Forest.

These novels should be read in order although each is self-contained. They do, however, refer to previous novels and its most helpful to read them in order. I strongly suggest you read them in order as that will definitely enhance your interest. It's also easier to keep track of the many characters in each novel if this is done.

All of these novels are quite lengthy, hence the cost of two credits. They're worth it. All contain highly original and fascinating stories about the Bonner family, set in rural New York during the late 18th and early 19th centuries. Set on the edge of the wilderness they represent a fascinating story of the history of that period although I wouldn't limit their impact by merely thinking of them as historical novels. They should be considered literature of the highest kind.

I read all of the stories in hard copy form then purchased each of the six in unabridged form from audible.com. Long gone junkies of this series will read and listen to them again and again. I had some trouble with my iPod in listening to them and was careful to manually start or restart each of the three parts of this and the other novels at Chapter 1 of each Part. If you don't do this the audible.com recording will sometimes drop the first paragraph or two when each new part is played. This is not true simply of this series. Be careful when listening to all novels that have two or more parts. This novel has three parts of approximately 8 hours each.

I've listened to more than 200 audible.com books, primarily classic literature as that's my background. This series represents one of the best I've found in a lifetime of reading. Highly recommended. Definitely five stars.

Sequels often are big let-downs, but fortunately that is not the case with "Dawn on a Distant Shore," the second book in a projected five part series that started with "Into the Wilderness."
Elizabeth and Nathaniel Bonner are still the focus of the story, which moves along at a fairly brisk clip, although it does falter toward the end when the action moves from Canada to Scotland.

Elizabeth still exhibits the same moral and physical courage as she did in the first book of the series. When her husband Nathaniel follows his father Daniel to Montreal, the younger man is also arrested and is likely to be hanged as a spy. Elizabeth, having given birth to twins, takes her babies to Canada in the dead of winter to try to save him. As in the previous book, no one is ever quite who or what they seem, and the Bonners encounter many shady characters in trying to determine Daniel Bonner's heritage....the secret of which lies in Scotland.

Sara Donati is a gifted storyteller. She has a good ear for natural sounding dialogue, her plotting is refreshingly original, and her characters are appealing -- even the "bad guys" have shades of gray in their character. My main criticism of this book had to do with the slowing of the action once the story moved to Scotland, and the fact that Nathaniel's daughter (Hannah or Squirrel) from his first marriage has started to take center stage.

For some reason authors seem to feel compelled to make children in historical novels into little adults, and Hannah is no exception to that "rule." Her emotions are simply too adult-like to be appealing to this reader. However, I still highly recommend this book to anyone who is looking for something a little different in an historical family saga. The fourth book in the series will be out in hardcover this fall.

Kate Reading was again wonderful with the delivery of the story

While this was an enjoyable and well written book in the Wilderness saga, the audio recording was abrupt. Each break made me wonder if I had missed part of the dialogue. When the reader was not engaged in dialogue her words became flat, almost robotic sounding. As soon as she switched to a character's dialect she was very good.

Probably not. This book is SO different from Into the Wilderness that the "transition" was jarring. I realize stories have to move on but the jump from Book 1 to this was a really too much. I suppose I was more interested in the storyline of Upstate NY, what was happening to the natives there than to hear about the French and the English---again. As if we don't know already from history at school.

The portrayal of the Colonialists from Europe was accurate. Having grown up in Europe, I understand Queen's England, Scots and French, so it wasn't a problem for me.
However, I can understand how most Americans would be lost in both the accents & these other cultures.


Would you ever listen to anything by Sara Donati again?

Maybe. Looks like this series will just get further & further away from the first book (according to reviewers). I am reluctant to invest any more time and money if that's where the story is heading.

I enjoyed the performance with all the languages and phrases spoken in French, Scots or Queen's or American English. It makes the characters vivid for me.

Do you think Dawn on a Distant Shore needs a follow-up book? Why or why not?

Perhaps for those who like the story line and want more about England, Scotland & France in those days. May be tough for American audience to care since Americans do not study European history unless they major in it in college.

Into the Wilderness was a great adventure book. This one is another colonial history movel
sprinkled with a little romance here & there. Elizabeth going everywhere with her twin infants was also over the top unbelievable.

Parts of this book were wonderful and kept me hanging on to every word... Sadly by the end I had lost interest and I had to force myself to finish... Left me not caring if I read more from the author.

Once the ship disappeared (I don't want to spoil the plot by more details) I had to quit the book. It was exhausting following one unbelievable twist after another. Nothing like the Wilderness of the first book in the series, and impossible to keep up with all the royalty, soldiers, French vs. English etc.

On a petty note, I wonder if anyone besides me was annoyed by the constant references to "he/she raised one eyebrow." After endless such comments in Book 1, I started counting them in this book. There were 13 through Chapter 14, when I quit listening. I don't know anyone who can raise one brow, though I'm sure some can. But really...

I would have rated the performance higher if I could have understood what was being said when the narrator uses her Scottish accent.

Beautiful and inspiring! I can’t wait for the next one! These books have truly become one of my guilty pleasures.