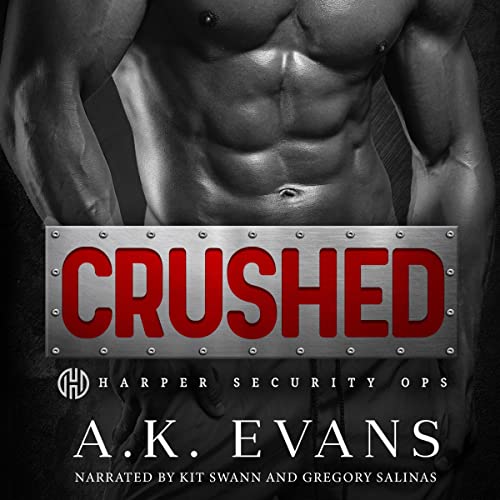 What’s the price of survival?

Sawyer McKinney didn’t want to come back. It wasn’t like anyone wanted to see her ever again anyway.

But this was about life or death, and that meant there was only one place she could go.

If Jesse Hale never saw Sawyer again, it would be too soon. After all the devastation she left behind years ago, he can’t imagine why she’d ever show her face again.

When Jesse learns that Sawyer needs personal protection, he has a choice to make. Either turn her away and never forgive himself if something happens to her or risk his heart and keep her safe.

Just as Jesse agrees to help her, Sawyer decides that the price is too high. She’d rather be dead than be crushed by Jesse’s combat boots again.

Crushed was a great addition to the Harper Security Ops series! Although Book 6 in the series this story can totally stand alone.

I really enjoyed listening to Sawyer and Jesse's story! A second chance after spending years with zero communication after a terrible tragedy. At times it broke my heart with all the pain Sawyer endured and what they missed out on. Overall, a very engaging listen that I needed more of. Narrators did a tremendous job bringing Sawyer and Jesse's emotions into the story and really balanced out each other.

Sawyer and Jesse, OMG!! I love this one!

OH my goodness, Crushed is one incredible, emotional journey that Sawyer and Jesse was on for over a decade!
Sawyer couldn’t stay where there was so much pain for her, so she left her mom and the man that she loved behind because she couldn’t stand the pain and anguish in what she thought she caused them.
Twelve years later and she shows up at Harper Security out of the blue, am I dreaming is the only thing that Jesse wondered. He was hurt and angry at seeing her and didn’t handle it very well. He was cruel and mean to her that day, how in the world will he ever get her to forgive him?
Jesse and Sawyer are definitely a second chance romance you don’t want to not hear! Gregory Salinas gives the Jesse vibe and does an incredible job as does Kit Swann as Sawyer!

Loved Sawyer and Jessie's story. I had tears of sorrow and happiness. First time listening to Gregory and WOW, his voice is swoon worthy. Kit was great as always. Can't wait for the next book in this series.❤❤❤❤❤

I love Harper Security Ops stories and was excited to listen the Jesse and Sawyers story. A. K. Evans always tells a great story, but O M G was this story just one of those stories that has you in all the different emotions. I cried multiple times during this story, not only because the story was so wonderfully written, but the narration these two provided brought another dimension to bringing Sawyer and Jesse to life.

The first chapters bring you the backstory of how they met and you are listening wondering what when wrong and then AK Evans throws in a HUGE emotional curve ball! Then you just want to know how to fix it because it was heartbreaking!!

This story will pull you in for a one nighter because you HAVE to see how they can possibly find the HEA they deserve (which is perfect)!

Give me more Sawyer and Jesse!

I absolutely adored Sawyer and Jesse! My heart broke for Sawyer hearing the tragedy and heartbreak she went through at such a young age. For her to think she had no one only to find out the one she wanted was there all along…swoon! I loved the strong but gentle man that Jesse was. His love for Sawyer poured through the pages. Their connection was just beautiful. Their HEA was long overdue and so deserved. I really liked the cameos of the other couples and the way the girl squad had her back and, ultimately saved her life. Beautiful story!