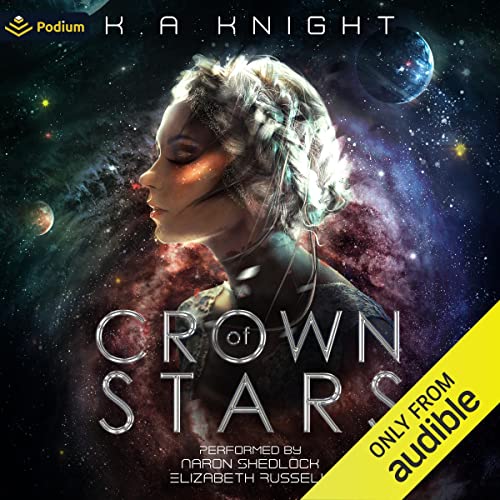 The Crown Princess of Zyria was born to wear the crown….but what if she wants more?

My life was organised since birth until the carefully constructed plans exploded like a supernova. The lick of flames began when I decided to sacrifice myself for my planet and my people.

Abducted into the stars I dreamed of, I have no choice but to embrace the part of me I have always hidden—the fighter, the warrior, and the imperfect, crass woman who doesn’t resemble the impeccable princess I am expected to be. Instead of using my silver tongue to fight my battles, I now hold true weapons, and for the first time since the crown was placed on my head, I feel whole.

Evil is flooding the galaxy, and for some reason, destiny has chosen me to stop it. The only problem is, I don’t know how. Luckily, I meet some men along the way who are willing to follow me on this mission. If the king could see me now, draped in leather and wielding pistols and knives rather than wearing ballgowns and reading old scrolls, he would collapse onto his golden throne.

Now, I fight my way across the cosmos to try and stop the destruction of everything we know.

I was ready to give up my life, my future, and my body, but I never expected to lose my heart along the way.

Crown of Stars is a reverse harem complete with a HEA. It contains explicit content and darker elements, including mature language and violence.

K.A Knight is an amazing author, none of her books disappoint and this one especially is really good, very spicy

I really wanted to like this book, and pushed through it hoping it will get better, but in end it wasn't for me. It's a sci-fi whychoose romance. For me it fell flat in several ways and some terminology cringy and pg words in place of the seggsey terms and no character development, growth, or relationship build up that felt genuine and plot that had potential but missed the mark. the narrators are always enjoyable treat for my ears.

I'm not usually into aliens and space travel and all that. However, this book sucked me into a world of planets, stars, and beings from other planets trying to survive as best they can. I loved this story the princess will do anything for the people she loves even sacrifice herself for her people. the men who love her will not let her go without a fight. K.A Knight is my new favorite author. if you like adventure sex and love check this book out.

Story was absolutely phenomenal. Immediately got sucked in. I have been a big fan of this authors work and this is by far my favorite.

Overall I enjoyed this book. The narration along with the multiple points of view made this story feel more real. The sexy moments were pretty great as well! Only one big group play time but multiple scenes with Saffron and her men. No MM scenes, they all stayed focused on there queen! I did find the Love At First Sight moments to be very unrealistic, but I mean she had to collect her harem somehow! I would recommend this to someone for a longer but nicely wrapped in a bow sexy time book!

Where to start with this K.A Knight book