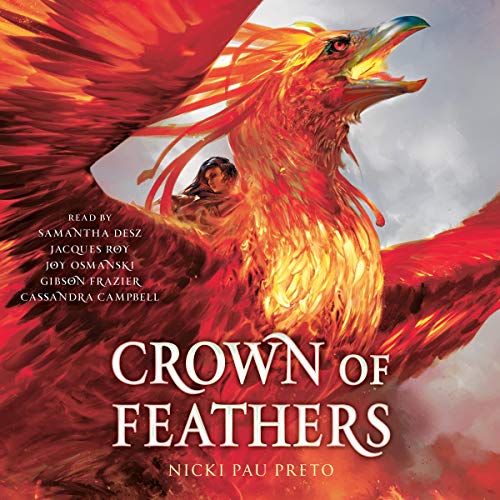 An Ember in the Ashes meets Three Dark Crowns in this lush debut fantasy novel about a girl who disguises herself as a boy to join a secret group of warriors who ride phoenixes into battle.

In a world ruled by fierce warrior queens, a grand empire was built upon the backs of Phoenix Riders - legendary heroes who soared through the sky on wings of fire - until a war between two sisters ripped it all apart.

I promised her the throne would not come between us.

Sixteen years later, Veronyka is a war orphan who dreams of becoming a Phoenix Rider from the stories of old. After a shocking betrayal from her controlling sister, Veronyka strikes out alone to find the Riders - even if that means disguising herself as a boy to join their ranks.

But it is a fact of life that one must kill or be killed. Rule or be ruled.

Just as Veronyka finally feels like she belongs, her sister turns up and reveals a tangled web of lies between them that will change everything. And meanwhile, the new empire has learned of the Riders’ return and intends to destroy them once and for all.

Sometimes the title of queen is given. Sometimes it must be taken.

Crown of Feathers is an epic fantasy about love’s incredible power to save - or to destroy. Interspersed throughout is the story of Avalkyra Ashfire, the last Rider queen, who would rather see her empire burn than fall into her sister’s hands.

It had great potential

most of the book is hemming and hawing about "do I tell them the truth? My secrets?" there was no substance. I made it to chapter 30 before I had to skip to the end.... which even then was wishy-washy. The story line could have been great if the characters weren't so flat.

This has a really cool twist, I mean the idea enters the head, but with so much going on and how the main character's story collide together, you kind forget about it. Veronyka is one cool cucumber, Val is a bitch, Triston is wishy-washy, and Sev is closeted. Oh Yeah, Trixxy is the wise, crazy, secretive old lady. I loved this cast of characters and the side line narrative in each chapter.

Great start to a new series!

This book is so good! Definitely one that requires more focus to initially get into- it took me three tries to finally get into it and love it. I’m so glad I didn’t return it, hahah it gave me such a nostalgic feeling like when I was 12 & just “discovered” the fantasy genre for the first time. Such a great first book and i cannot wait for book two to come out in 2020!

This was a good read overall. It got a little bogged down in the middle.

I thought this was a fairly well-written, well-thought out novel. The performers did a pretty good job with their parts. Overall, I enjoyed the book and will be picking up the second.

i never writes reviews but I love the concept of Phoenix riders. The use of Dragons is a bit overdone but I love the originality of using legendary birds instead. The middle was a little drawn out but the overall book makes up for it and that END! I definitely didn't see that coming. I highly recommend this book and I can't wait for the sequel.

Good story and concept. Enjoyed it very much, and the narrator's were very good. I'm still new to the audiobooks, but this has been my favorite so far.

Much much better than what I was expecting

This is only the second series I've read wherever chapter is from another point of view. It was sort of like putting a puzzle together I wasn't sure what was going on before I knew that everything was fitting together. to the best of my knowledge I've never read anything by this author before but I plan on changing that. As a fat balding middle-aged man I don't think I'm the target audience. The way the author painted this universe is absolutely mind-blowing. If I had one critique it's that it was a little short. I feel like this book could have been three or four times longer and not felt too long. There are very few books that I read more than once but this may be one.

Is the 2nd narrator a Zombie ?

I actually saw a lot of negative reviews about the bad 2nd narrator but because the book was on deal I thought I could handle it if the story is good, but no. Now I know why it was on deal. My goodness who is that lady narrator? Was she reading it from her death bed or something. And how was she ever selected to be a narrator!!! Is she related to the editor or something? I think whoever chose her in the audition should be fired for allowing her to be a narrator. I can't even explain how horrible it was as soon as the narrator changed and that lady started reading. It was like a Zombie reading the book. After 5 minutes of that reading and I was thinking to kill myself than listen to it anymore. This could be used as torture method for interrogation. Returning it.