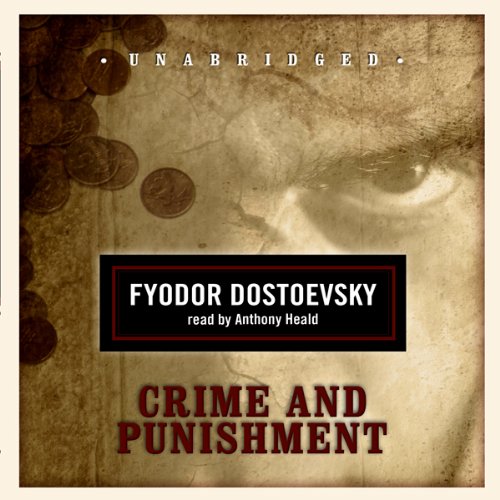 I didn't realize Anthony Heald was such a brilliant audiobook reader; now that I know, I'll be on the lookout for more titles from him in the future. He takes what I had always thought was a fairly stodgy translation and makes it jump off the page (or in my case, out of the iPod). It's a breathless performance, all the characters clearly differentiated, the narration moving forward rapidly, the novel closing in on the climax of the story with almost unbearable tension. There are at least three hearty laughers in this novel, and in Heald's reading we can tell them all apart instantly.

In this case the tension is moral rather than physical. It's a murder mystery of sorts, but one where we see (and FEEL) the crime being committed: Dostoevsky and Heald put us inside Raskolnikov's mind before, during, and after the double murder at the center of the plot. In this case the problem that drives the story isn't whether the police will catch the killer -- although the novel features a clever and persistent detective worthy of the best of the genre -- but whether the killer can be brought to a point where he has the moral courage to confess.

It's a disturbing book, not because of Raskolnikov's minutely-described act of violence, but because of Dostoevsky's pitiless, unblinking gaze at poverty. I can't remember the last time a description of hunger and hopelessness had such a visceral effect on me. I kept wanting to grab Raskolnikov by the collar and scream "EAT SOMETHING!!"

The book is a classic, so there is not much to say that wasn't already said by someone. I'll turn to the reading...

WOW. This is the best audiobook I've ever listened to. The narrator, Anthony Heald, reads like he is telling the story from his own head, like it's something that happened to him. Amazing. A very very enjoyable listen and highly recommended for all.

I'll definitely try to check other books read by this guy.

If you could sum up Crime and Punishment in three words, what would they be?

I loved the plot and the characters but the narration by Anthony Heald was so outstanding that it's hard to even describe it other than saying it was hypnotizing. More than 20 hours long and I couldn't wait to get back to it each time I had to leave it. Mr. Heald was absolutely brilliant in his smooth transition from character to character and his pronunciation of those long Russian names.

Hard to choose...I guess the scenes in which Raskalnakov meditated on his crime and the various transitions he went through from shock to believing he had no fault and a complete lack of guilt.

The audio book was 20 hours long...no one sitting reading here, nor should it be rushed.

Murder...torment...retribution...resurrection. These are the themes of Dostoyevsky's CRIME AND PUNISHMENT. And this is a book I have avoided reading for decades, fearing it would be dull and difficult to comprehend. I was wrong! This is a magnificent epic of life prior to the Russian Revolution and one man's mistake. The descriptions of life in Russia at that time are precise and heart-wrenching. The poverty, the squalor, the inability to rise above your standing in life and, worst of all, the descriptions of starving children being forced to "dance" for a few rubles so their parents and siblings won't starve. It's a bleak situation and yet the narrative and characters are often amusing and always fascinating, despite their lot.
I listened to the audio book version and Anthony Heald, the narrator on this particular version, was absolutely superb. If there were Oscars for book narration, he should have received one for this. He did every character, including the female ones, and you never had to guess who was speaking the dialogue because he adapted his voice so smoothly from one character to another. Simply outstanding!

Anthony Heald did not so much read this book, as inhabit and bring to life each character as a distinct individual. It is an amazing performance.

This was a total surprise for one who avoided Russian literature in high school and college. It was so absorbing and accessible. This narrator, Anthony Heald, was the best I have had the pleasure of listening to in my eight years of listening to Audible. I am now going to search for his other works, then try some more Dostoevsky!

This narrator is simply awesome! His voices are clear and varied, and for one character he even manages to speak accompanied by a consumptive cough! What can I say for the content other than that they're called classics for a reason. Everything means something, and there is beauty in such resolution.

Crime & Punishment is near or at the top of my list.. I wanted it in an audiobook, but was leery about quality. This version is superb. Anthony Heald is awesome not only in reading & characterization, but also in pacing and tone. His voice modulation is never too loud or too soft & he always is clearly understandable. The result is a relentless wild ride through emotion, action, philosophy and analysis.

This audio is NOT UNABRIDGED.

I have yet to read this book, and once I begun and started following along with my book, realized that it is not word for word. Disappointing. Please take note of this before you purchase this book. I was unaware.

Which character – as performed by Anthony Heald – was your favorite?

I really enjoyed the way Heald captured Raskolnikov's inner torture and frazzled thoughts. All of the male characters were spot on. I was a bit annoyed by the female voices, particularly Sonya's, but that's a minor issue.

I chose this reading because it did not have a mournful British reader and was a bit speedier than the other readers of C and P I listened to on Audible. I was glad I did. Heald's inflection gave a nice interpretation of the novel and the voices he performed helped me keep track of all of the characters (and the pronunciation of their names).

This is a dark, intense novel. The reader does an excellent job making it seem alive and interesting. I never read the book so I can't compare the reading to the actual writing by Dostoevky. It is quite lengthy. I kept wondering what else could happen to make the story so long. I was not disappointed.