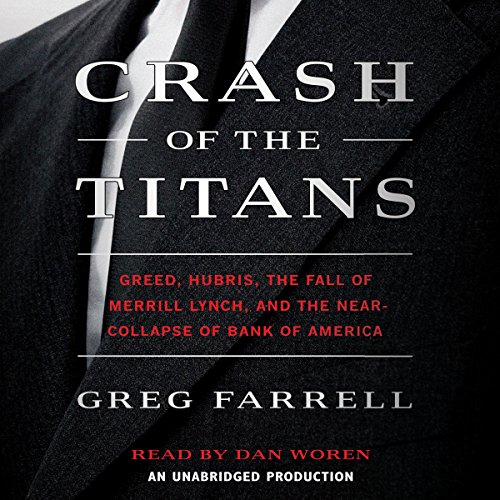 Crash of the Titans

The intimate, fly-on-the wall tale of the decline and fall of an America icon

With one notable exception, the firms that make up what we know as Wall Street have always been part of an inbred, insular culture that most people only vaguely understand. The exception was Merrill Lynch, a firm that revolutionized the stock market by bringing Wall Street to Main Street, setting up offices in far-flung cities and towns long ignored by the giants of finance. Merrill Lynch was not only “bullish on America,” it was a big reason why so many average Americans were able to grow wealthy by investing in the stock market.

Merrill Lynch was an icon. Its sudden decline, collapse, and sale to Bank of America was a shock. How did it happen? Why did it happen? And what does this story of greed, hubris, and incompetence tell us about the culture of Wall Street that continues to this day even though it came close to destroying the American economy?

Greg Farrell’s Crash of the Titans is a Shakespearean saga of three flawed masters of the universe. E. Stanley O’Neal, whose inspiring rise from the segregated South to the corner office of Merrill Lynch—where he engineered a successful turnaround—was undone by his belief that a smooth-talking salesman could handle one of the most difficult jobs on Wall Street. Because he enjoyed O’Neal’s support, this executive was allowed to build up an astonishing $30 billion position in CDOs on the firm’s balance sheet, at a time when all other Wall Street firms were desperately trying to exit the business. After O’Neal comes John Thain, the cerebral, MIT-educated technocrat whose rescue of the New York Stock Exchange earned him the nickname “Super Thain.” He was hired to save Merrill Lynch in late 2007, but his belief that the markets would rebound led him to underestimate the depth of Merrill’s problems. Finally, we meet Bank of America CEO Ken Lewis, a street fighter raised barely above the poverty line in rural Georgia, whose “my way or the highway” management style suffers fools more easily than potential rivals.

The merger itself turns out to be a bizarre combination of cultures that blend like oil and water, where slick Wall Street bankers suddenly find themselves reporting to a cast of characters straight out of the Beverly Hillbillies. BofA’s inbred culture, which perceived New York banks its enemies, was based on loyalty and a good-ol’-boy network in which competence played second fiddle to blind obedience.

Crash of the Titans is a financial thriller that puts you in the theater as the historic events of the financial crisis unfold. Its wealth of never-before-revealed information and focus on two icons of corporate America make it the book that puts together all the pieces of the Wall Street disaster.

"Farrell weaves his facts into a story...piling detail upon detail to sketch the innerworkings of Merrill Lynch, which he calls the Wall Street firm that made it possible foraverage Americans to reap handsome returns in the stock market." (USA Today)

“Farrell tells a story based on hundreds of hours of interviews that builds like a hurricane.” (Forbes.com)

A Dizzying Story About the Fall of an Icon

Crash of the Titans is a spiraling story that spans the 80 year history of Merrill Lynch and Bank of America in a back and forth, non-linear path. Understanding the back story and living through the storm as a Bank of America associate during the Great Recession, I was able to follow the cast of characters and timeline of events with ease. But I can't imagine someone outside of the firm being able to make the same connections as easily without having to re-read (or re-listen) to many sections.

But if you can follow the timeline of events, understand the basics of the banking terms and functions of capital markets, the story is awesome. It is a can't miss thrill ride that puts a human context around the headlines that splashed the front pages of newspapers for weeks between 2007 and 2008. Everyone we though were villains were not necessary so. Everyone we thought were hero weren't so innocent either.

Dan Woren speaks life into this very intriguing story written by Greg Farrell. Unlike some narrators of business books, Woren was no overly dry or stiff in tone. For those of us who enjoy business and non-fiction audiobooks, the narrator is key. And Woren's performance kept me going and gave feeling to each of the Wall Street bankers her spoke for.

In all, this audiobook was well worth the credit, but it is not for the faint of heart. The story treats the reader (listener) as if they understand the basics of capital markets and jumps around with the timeline. But the holistic story of how an icon like the Thundering Herd of Merrill Lynch who helped restore confidence in the market by middle America after the 1929 stock market crash until its own demise is enthralling for those of us who lived through it.

The author needs an outline or timeline

This book needs a timeline and the author should stick to it. Farrell goes in and out of decades like the dow chart on a volatile day. It was very difficult to keep the flow of the story in my head because in one paragraph he's discussing 1992 and in the next 2008 and back again before the next indent. It was difficult enough to remember the hundreds of names of all the players, but when you add the mixed up, back and forth, far past to near past recounts, I ultimately listened just to get what I could out of the facts. An outline would have been helpful for the reader and the author during his writing.

A solid, informative read on Merrill and BoA

Greg Farrell has produced a solid, meat-and-potatoes narrative on Merrill and its acquisition by Ken Lewis during the financial crisis. Having read several books about the crisis, this one added more insight about the time sandwiched between the departure of Stan O'Neil, the hiring of John Thain, and the purchase of Merrill by BoA. Dan Woren does a great job of narrating, and overall it's a well-researched read that explains the history of how BoA grew from a little-know North Carolina bank into a banking colossus and reiterates the fundamental management problems at Merrill that lead to its demise.

There are a number books available dealing with aspects of the financial crash. I have read a stack of them, but in Crash of the Titans Greg Farrell takes a different direction by telling the story from the perspective of Merrill Lynch. For years, Merrill was been a breed apart on Wall Street. Yet, the firm went under and was purchased by Bank of America (which is another story). The most interesting passages for me dealt with the management culture of Bank of America and how Merrill was managed after acquisition. In the postscript, Farrell provides a brief analysis of what went wrong and what it might mean. Essentially, he concludes that poor management decisions are not necessarily evidence of fraud. At least the Merrill stock price had some residual value. Farrell, who also authored Crash of Titans, Greg Farrell Corporate Crooks: How Rogue Executives Ripped Off Americans and Congress Helped Them Do It!, can really tell a story. It is helpful if the reader comes to the book with some understanding of the housing crisis, but the book can still be informative without that knowledge. The narration of Dan Woren is excellent.

The Melodrama Behind the Scenes

Interesting and worthwhile story of the top executives at Merrill and BofA during the tumult of 2007 and 2008. It reads like a melodrama, with detailed descriptions of rivalries, bad feelings, insensitive and arrogant behavior, and corporate cliques???in short, a gossip???s delight as well as useful background on how critical high-level corporate decisions were made during that period.

One of the more interesting episodes discussed was Ken Lewis???s attempt in December 2008 to seek additional US government assistance to BofA for the Merrill transaction, using the threat of invoking the ???material adverse change??? clause in BofA???s merger agreement with Merrill. He ran into a Treasury Secretary and Fed Chairman who were ready and fully capable of calling his bluff. Lewis was sternly rebuffed with the admonition that such a step would call BofA???s judgment into such serious question that the banking authorities would likely remove its top management and Board.

With its focus on personalities, this book makes only cursory references to the underlying causes of the 2007-2008 financial crisis. As I have mentioned in other reviews, if you are looking for books that explain the underlying causes in detail I recommend David Faber's book (And Then the Roof Caved In) followed by Michael Lewis's book (The Big Short)..

I am glad to have purchased this book on audible. The details of this story leading up to and during the 2008 economic downfall are worthwhile and I would have never been able to read this on my own without falling asleep.

Would you consider the audio edition of Crash of the Titans to be better than the print version?

yes. especially since reading a book while driving is a bad idea

that one man can bring an institution down

Which character – as performed by Dan Woren – was your favorite?

made me scared that this could happen

i am keeping my investments in index funds. i do not trust wall street

Great narration. Slow at first, a lot of names that I forgot shortly after they were said. However, deeper into the chapters really held my attention. Interesting story.

Entertaining and informative. Great narration and nice story on the previous financial crisis.
A recommended ‘read’

The title is what grabbed me. I figured it was worth a shot, having worked in a dysfunctional department within a bank. The detail and scope of the story kept me entirely intrigued. The best quote: “The key to success is authenticity. If you can fake that, you’ve got it made.” I enjoyed the book, though the story is like witnessing a morbid car crash from which you know you should look away, but ultimately, you must see the tragedy for yourself.