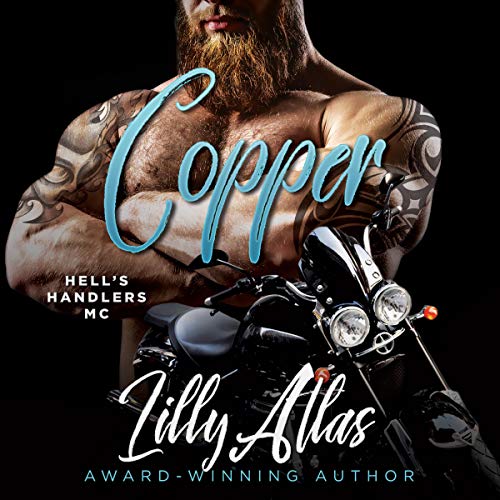 Enormous, commanding, and hotter than sin, Copper is the only man Shell has ever wanted. Even as a young teen, when it was impossible and taboo to capture the attention of a grown man, she longed for him. For years, Shell clung to the dream of turning 18 and finally being noticed by the Hell’s Handlers’ rough and gruff president. But the universe had other plans, and she was forced to make a horrible choice. A choice that altered the course of her life forever, sealing her fate, and ensuring the dream of being Copper’s ol’ lady would never materialize.

Sixteen years his junior. Daughter of his MC’s former president. Single mother whose deadbeat sperm donor doesn’t provide an ounce of support. Loved as a younger sister by every man in the club. The list of reasons goes on for Copper to stay away from Shell. Problem is, he’s been hot for her for years. Copper finally gets some relief when she moves out of Tennessee, but once she’s back, all those reasons to keep his distance grow weaker by the day.

Unable to fight against his own judgment any longer, Copper finally claims Shell for his own. But once again the universe steps in, revealing secrets with the power to destroy them both.

This series has not disappointed at all. It has everything I look for in an mc. Hot alpha males, kick ass females, action, some skull cracking and 100% loyalty. And these narrators are by far some of the best I’ve heard and I’ve listened to hundreds of books. Definitely recommend and I suggest you start with Zach just because they whole series is great!

Copper was loyal to a fault. Shel was as clueless at 24 as she was at 16, She could have told Cooper or one of the "brothers" about the tape anytime after the first "rape by extortion", she didn't. Besides that in 3 years it never occurred to her, even though she wasn't a slave or confined in any way to get birth control. I'm just saying. Then when the rapist was back again & threatening the people she claimed to love she still said nothing. Somebody else had to start the narrative. Noah Michael Levine was great , Erin deWard not so much probably because of the whiny nature of Shel, even when she was trying to be tough, she whined.

and really love the way the narration is done. I listened to these thru the Escape package. I will purchase the series. digital and audio.

Okay. I thought this was going to be great, which in a way it was but a lot of things annoyed me. Shells narrator was not my favorite...I honestly disliked listening to her. Also Shell’s soooo whiny! I couldn’t stand her personality! Honestly I wanted to go into the book and slap her to just get a clue! She never listened to anyone who tried to protect or help her and just did whatever she wanted! I felt her age even though I could tell the author was trying to make her mature. Also, Copper was kinda dumb...I wanted to slap him too never stopping his brother from all this shit he was doing...very straightforward signs he was a psychopath and he just went alone knowing everything his brother had done and didn’t even put up a fight when his brother attacked him...he’s suppose to be this badass biker president but he seemed so weak to me. Anyways...It wasn’t terrible but it could have been better. Also it was such an unsatisfying ending to Rusty...

I’m not an audiobook girl and only made the exception for my love of this book. I loved “hearing” my favourite characters of the Hells Handlers series. Noah Michael Levine was the perfect Copper.

This has been a great series but I couldn't wait to hear Copper and Shell's story. This book didn't disappoint. This book is funny, entertaining and drool worthy. Narrators did an excellent job, especially Copper's sexy accent. I want more of this series.

I could not wait for Cooper and Shells story to come out and when it did it absolutely did not disappoint! However, when the audible came out, I could not buy it fast enough! Unfortunately with life I just now got around to finishing it but Coopers accent is absolutely drool worthy! The two people who voice Shell and Copper did a great job and I already want to start listening again!

Finally! It feels like it has taken forever for Copper and Shell to come together! This was definitely a high stress read for me. After so long of watching them circle each other I was on the edge of my seat the whole way through. There were so many secrets and so much danger here that even though I knew they would get their hea, I was still worried for them both.

The only thing keeping this from being a 5 star read for me was Copper. Don't get me wrong. He is amazing and I love him. It just seemed very out of character for him to be so stupid where Rusty was concerned. Yes, I know he was his brother and he loved him, but I just didn't see Copper allowing ANYONE to say and do the things he did. Especially the way he let him treat the women. I wanted to be so mad at Shell for keeping the secret for so long but I can kind of see why she did. Copper was blind where Rusty was concerned. Shell is such an amazing woman and the perfect Queen for the MC. She is the epitome of strength and loyalty.

I cannot end this review without talking about the slide scene! I actually had to pause it for a minute afterward to be able to laugh without missing anything! I really really wish I could have witnessed the other brothers getting a hold of the video. Their commentary would have been epic!

As I have already stated in previous reviews for this series I love these narrators but I have to admit I was especially looking forward to this one because I LOVE the way Noah Michael Levine does Coppers voice. I don't know much about accents or how accurate it is but oh my! They deep raspy voice just really pushes all of my buttons!

I want me a Biker, MC story is perfect, i really enjoy hell's books, worth the 10 hours and lost of day.

I just love these characters

I read Coppers story several months ago and finally had to listen! It wasnt a disappointment, first off the narrator's are just amazing and I love the duet style audiobook. I think my favorite thing about Lilly atlas would be her representation of female characters. It seems to be hard to create female characters who are both sensitive and strong in books but she nails it everytime! As a fellow female it's hard to listen to a weak female or a b***** female who mistakes strength for rudeness, it stereotypes the female gender. Furthermore, it makes it hard to relate to the characters. I've read all of Lilly Atlas's books and she never has this problem, it makes it very enjoyable to listen and easy to connect with the characters. Connecting with the characters makes it easier to understand and enjoy the plot line!
Shelly and Copper have explosive chemistry, as they finally connect after years of hiding their feelings, the secrets of the past try to tear them apart, it's a good thing Copper isnt the only tough bad ass in this duo! I paid for this book and it was worth the money, it's worth a credit, and it's definitely worth the time!