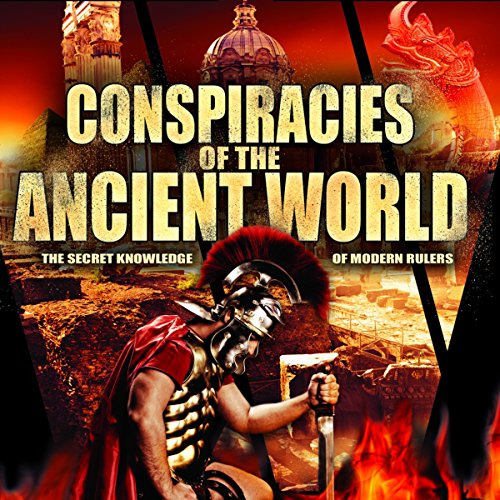 Conspiracies of the Ancient World

There are many mysteries in the world, from Bigfoot to Aliens, but some run deeper than we can imagine and are older than time itself. This comprehensive program contains decades of intense research from some of the world’s leading authors on ancient mysteries.

International best-selling author, Robert Bauval reveals his amazing research into the hidden legacy of ancient Egypt. Almost everything we once believed about the origins of our civilization is challenged with a startling revelation.

Philip Gardiner is a leading authority on serpent worship and has explored mysteries around the globe. Gardiner exposes the biggest religious cover-up in history, as he expounds upon the underlying reasons for Serpent Worship, past and present. He provides remarkable evidence for an ancient and worldwide annihilation of its practices, and discovers the real history of our religious past.

Solomon’s Temple in Jerusalem is reputed to be the depository of the most esoteric knowledge in human history. For generations, scholars and researchers have tried to discover the secrets of its origin and the mysteries purportedly concealed within. Explore the fascinating secrets brought back by the infamous Knight’s Templar and the truth at the heart of ancient Freemasonry.

Conspiracies of the Ancient World is a comprehensive presentation on ancient knowledge purposely concealed from the world by sinister forces with a hidden agenda.

What would have made Conspiracies of the Ancient World better?

Never made it through part 3, because it is IMPOSSIBLE to listen to someone speak while listening to ear splitting headbanger music in the back ground, that goes to PAINFUL levels when the narrator takes his 10 second pauses every 5 seconds. This is just unacceptable.

This would have been so much better without the "music", but with it, I just cannot listen to it. A complete waste of money.

The absolute worst "book" I have downloaded from Audible, or anyone else for that matter.

Would you ever listen to anything by Robert Bauval and Philip Gardiner again?

What didn’t you like about Robert Bauval and Philip Gardiner ’s performance?

The music is just ridiculous.

What character would you cut from Conspiracies of the Ancient World?

The moronic sound engineer who decided to put that crap in the background and then raise the volumes to painful levels ever 10 seconds.

This could have been interesting, but they ruined it. A complete waste of money. If you buy this, have some aspirin ready, you're going to need it.

Where do I start? For one thing, this is not a book co written by both the authors mentioned, as I mistakenly believed. This is for the most part an "interview style" recording. Bauval relates his Egyptian discoveries and personal anecdotes and opinions to an interviewer who is mostly silent. Semi-interesting, but no really new info, if you are into the "lost history of human civilization" kind of thing as I am. The second part of this recording by Gardiner is much more interesting but really has nothing to do with Bauval's work. It is as if the production company had two unrelated recordings around and combined them with the "conspiracy" label to try to make a buck. I was, however, fascinated with Gardiners knowledge and conclusions concerning ancient serpent worship. The information he provides is marred by the horribly done production. The first three quarters of the Gardiner segment is again "interview style", which consists of a badly overdubbed "interviewer" asking questions that are obviously post production, with horribly clunky and obvious edits and an overloud new age background music thing playing in the background. The last part of the Gardiner segment is a strange kind of New Age/Death rock music infused historical dissertation on what he believes the wisdom of the ancient snake cult has discovered and hidden in metaphor for the purpose of teaching humanity the true goal of being human. It is like listening to a bad youtube video, although the information is interesting. If you are a very religious person (Christian, Muslim, Jewish, Buddhist, etc.), you may be uncomfortable with his opinions on the serpent worship basis of all faiths. Be warned.

Would you be willing to try another book from Robert Bauval and Philip Gardiner ? Why or why not?

I like Bauval's work. Gardiner's work is interesting. I really do not know how they could collaborate.

It would be two movies and I would have to be either extremely bored, or extremely high.

If this comes on special for like $4.95, and you are into the lost history of man thing, you might find it interesting enough to overlook the production faults. But don't waste a credit.

Hated it! There is almost continuous music playing in the background that makes it difficult to hear what is being read.

I expected a scholarly work. I got this instead

I find it difficult to appreciate a work that wants to be taken seriously but makes blatantly false statements or intentionally confusing statements amid other facts. Example: the author says the name Pendragon means head of the dragon. No argument. But then he says the names Uther and Arthur translate into God. Uther means terrible and Arthur means bear.

Worst of all is the hideous music that accompanied this work. It could have been 30 minutes shorter by removing it. It added nothing to the production except to act as filler and to drown out the voice of the narrator on several occasions.

Lastly I don't know how his long drawn out narration repeating the same information related to the title. The real title should be 'I think I found some stuff in a bunch of cultures that relates to snake and I find interesting. I hope you do too because I'm going prattle on about it for the next 3 hours."