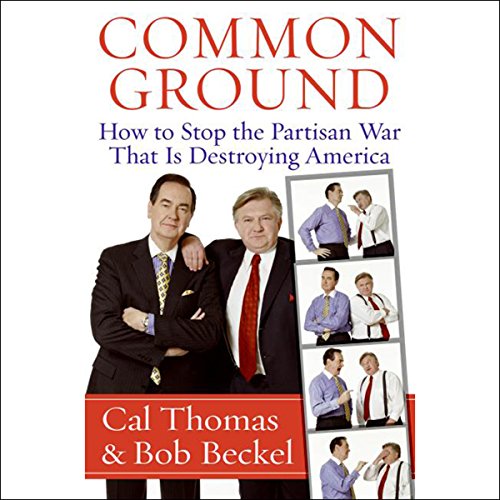 Inspired by their popular USA Today column, conservative Cal Thomas and liberal Bob Beckel show politicians of both stripes how to get beyond partisanship, restore civility, and move our country forward.

Thomas and Beckel are a unique pair in today's political climate: pundits from opposite sides who not only talk to each other but work together to find common ground on some of the most divisive issues facing us, from the war in Iraq to gay marriage to the Patriot Act. Common Ground unmasks the hypocrisy of many of the issues, organizations, and individuals who created and deepened the partisan divide at the center of American politics, and makes a strategic case for why this bickering must stop.

These guys should know. For years, Beckel and Thomas contributed to the climate of polarization in Washington...and they admit it. "We're two guys who spent a lot of years in the polarizing business, but on opposing sides," they write. "We helped write the game plan, and we have participated in everything from getting money out of true believers to appearing on television to help spread the contentious message. In many cases, we wrote the message. We know the gig, and it's just about up." In this much-needed audiobook, Thomas and Beckel go beyond their column to offer a sobering overview of the current political divide and its corrosive effect on us all. They also explain how bipartisanship and consensus politics are not only good for the day-to-day democratic process but essential for our nation's future well-being.
©2007 Cal Thomas and Bob Beckel (P)2007 HarperCollins Publishers

"The lucid political discussion between a conservative and liberal is refreshing." ( Publishers Weekly)

The intent/desire of the book is good. The execution is disappointing. One of the authors I usually agree with when giving commentary the other normally presnets his view well though I disagree. This just seemed to say there are not some issues where flexibility would go from compomise to selling out your convictions. Then the predictions for 2008, only underscore the inaccuracy. Again the aim was well intended and perhaps in a different attempt has potential value.