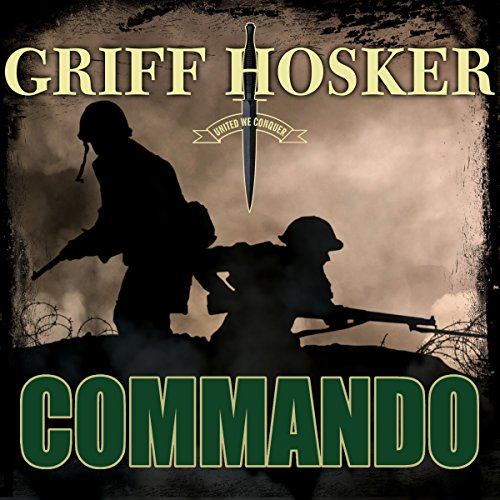 It's 1940, and the British Expeditionary Force is caught ill prepared for the onslaught of the German Blitzkrieg and its deadly panzers. Caught in the desperate retreat to Dunkirk, Tom Harsker, son of a World War One ace, discovers that he is a natural soldier. Escaping to England and with complete disaster narrowly averted, Tom is selected to join the newly formed Commandos. With Britain standing alone and the seemingly inexorable German forces massing across the Channel for invasion, Tom and his fellow Commandos must battle against all odds in daring raids to buy precious time.

Our Hero is a very unusual person. Perhaps even a psychopath. He must have had a strange childhood. Being taught not just languages, sailing and flying but modern weapons, battlefield first aid, principles of military leadership and even hand to hand fighting I can only wonder what he thought he was being prepared for. “Son, you need to know these things just in case there’s a world war and you're caught behind enemy lines.” No pressure or anything. Just let us know how the therapy goes... He doesn’t seem to have a big, or even a small group of friends. He doesn’t seem at all interested in girls, or even boys. He doesn’t seem bothered in the least when he starts killing people, even up close and personal. He doesn’t seem more than a little put out about his comrades being killed. No bad dreams, no irrational crying, no bouts of drinking, deeply inhaling petrol fumes or other escapes. He seems fully acclimated to a culture of violence and death. In fact, he seems quite happy. Psychopath it seems. Perhaps once the war is over he’ll be the one making a new pair of boots out of the neighbor’s skin. (But he seemed like such a nice, quiet boy...) The author kind of tips his hand with that stuff in the epilogue about breeding. "I was a Hosker and I was just doing what my dad had done and my grandfather too. I daresay if I had gone back in time I would have found Hoskers doing the same thing at the Alma, Waterloo, Blenheim, probably back to Agincourt and Crecy. You don't change your blood." Might as well have been saying “it’s all in the genes, you see, the good ones and the bad ones. Some of them we might even call untermensch and our kind we can call ubermensch. All right, let’s get back to this war against the evil Nazis!” Could the author really have been this obtuse? Maybe. The fact that in this entire book about commandos there was not one joke about "going commando" suggests so. So why not a lower review? One star, say? Actually I enjoy the "guy stuff" about making terrorist devices out of potato mashers, etc. It's all kind of fun. Most of us admire skill and courage and some of that is well done by this author. Given their popularity, it's clear that I'm not alone in this enjoyment. But it's just escapist fantasy in the end. The great wars of life and death struggles against an overwhelmingly powerful enemy are no more, unless you're in an occupied country fighting off the great imperial power of our time, nudge, nudge, say no more. We despise the powerlessness of our own lives and long for a heroic struggle against evil. Like fighting the fascists alongside peasants. When the character Ned was introduced as a commie who fought in Spain I made a bet with myself that he'd be killed off and we'd never get a conversation about what led to his beliefs, what motivated him to go, what he saw, experienced and learned. I won that one. I didn't think it took that much literary courage to spare a few sentences for such an interesting character but not everyone has the courage of a hero.