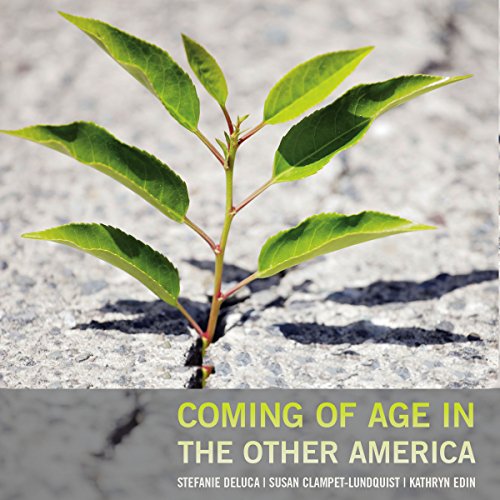 Coming of Age in the Other America

Coming of Age in the Other America shows that despite overwhelming odds, some disadvantaged urban youth do achieve upward mobility. Drawing from 10 years of fieldwork with parents and children who resided in Baltimore public housing, sociologists Stefanie DeLuca, Susan Clampet-Lundquist, and Kathryn Edin highlight the remarkable resiliency of some of the youth who hailed from the nation's poorest neighborhoods and show how the right public policies might help break the cycle of disadvantage.

Coming of Age in the Other America illuminates the profound effects of neighborhoods on impoverished families. The authors conducted in-depth interviews and fieldwork with 150 young adults, and found that those who had been able to move to better neighborhoods - either as part of the Moving to Opportunity program or by other means - achieved much higher rates of high school completion and college enrollment than their parents. About half the youth surveyed reported being motivated by an "identity project" - or a strong passion such as music, art, or a dream job - to finish school and build a career.

Coming of Age in the Other America presents a sensitive, nuanced account of how a generation of ambitious but underprivileged young Baltimoreans has struggled to succeed. It both challenges long-held myths about inner-city youth and shows how the process of "social reproduction" - where children end up stuck in the same place as their parents-is far from inevitable.

The book is published by the Russell Sage Foundation.