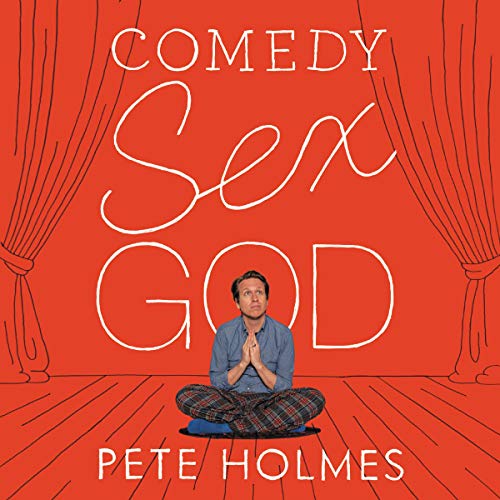 Part autobiography, part philosophical inquiry, part sacred quest - The Subtle Art of Not Giving a F*ck for the spiritual seeker - a hilarious, profound, and enlightening romp around the fertile mind of standout stand-up comedian, host of the hugely successful podcast You Made It Weird, and star of HBO’s Crashing Pete Holmes.

Growing up as evangelical Christian outside Boston, Pete Holmes was taught that drugs, alcohol, and premarital sex were serious transgressions. Faithful to the tenets of his faith, Pete did not swear, did not drink, did not smoke, and did not fornicate. He did devote himself to one woman, married her, and moved to the country to start a simple life and build a family. Then the wife he pledged himself to cheated on him very publicly. Thanks for nothing, God.

When his attempt at a picture-perfect life failed, Pete was forced to reexamine his beliefs. But neither atheism, Christianity, nor copious bottles of Yellow Tail led to enlightenment. Longing for a model of faith that served him and his newfound uncertainties about the universe - you know, the little things - the scorned believer embarked on a soul-seeking journey that has become the foundation of his work today. Comedy Sex God is his funny, thoughtful, straight-from-the-heart mediation on life, creativity, love, God, and the things that matter to him - and to us all.

Pete ponders the most valuable spiritual truths he’s picked up in his post-religion life and shares a few personal stories - of professional success, failure, and the pain in his balls. Comedy Sex God is celebration of losing something to find something else - a void that became a door to spiritual exploration - a glorious journey into the mind-blowing unknown that never would have begun if your wife hadn’t cheated with a guy named Rocco.

Every Ex Christian Should Read

Beautiful discovery of a man rediscovering faith without faith. Every ex Christian can relate. 5 stars.

Easy listen about a real guy making his way through the world and discovering more about his spirituality.

Absolutely LOVED it. I can relate with almost every word Pete says in this book. It's funny, sincere, and thought provoking. Definitely one of my favorites this year so far! ❤

The size of the words on the cover are appropriate

"Comedy" being the smallest word.
This book was like being cornered at a party by a dude telling you his life story. And at first, it was interesting, so you humored him. You even asked follow up questions, because you could relate to childhood restrictions and fears placed on you by religion, or parents not being communicative, etc.
Then that dude says "And then I discovered the healing powers of crystals".

And there you are. Paralyzed by social etiquette. You've already wandered in too deep. You can't just run, even though you would gladly use all the magic this lunatic thinks this crystal holds to escape this conversation. But no.

Now this guy is no longer talking to you. It's not conversation any more. It's an evangelistic lecture. And you finally hit the "Alright, I'm done with this, shut up dude" then he whips out a picture of his daughter and you go "Oh, cute baby" then he yells "CRYSTALS FOREVER!"---
Then a voice says "Audible hopes you have enjoyed this program."

There. I just summarized the entire book.

I grew up in the evangelical church and went through the exact same evolution and transform that Pete did. This was such an amazing book that put words to my journey and introduced me to new ways of seeing and being. The audiobook is so perfect because you feel like Pete is talking with you. Like you are participating in an experience rather than just reading words on a page. His humour and style is playful yet deep. I absolutely loved this book and plan on reading it again. If you want to grow in your understand of the divine mystery we are all born into, then get this book and listen to it ASAP.

Pete is one of the most relatable and inspiring people and this book is no short of both of these qualities. Comedy Sex God is a wonderful and honest book diving into the messiness of life and finding the peace in the journey even when that idea is scary.

Too Heavy on religion

Pete, I am a big fan of your standup, and I don’t write review on anything. But this book is way too, too, too much on religion and spiritualism and not enough of Pierce……….

I love Pete Holmes and think he is one of the best comedians out there. However, be aware this book is essentially two very different books in one. The first half of this book was fantastic for anyone who loves his stand up or his show, Crashing. The first half is made up of hilarious and moving stories by Pete Holmes about his life, growing up, and getting his start. Then about half way through the book you are going to hit a wall of his journey into downward doggy, guru hugging, nonsensical (imo) spiritualism. I don’t have anything against spiritualism, you should enjoy/believe whatever floats your boat, but as a reader who was thoroughly enjoying this book i found the transition to be disappointing and was not interested in a guide on “how to be enlightened. I kept powering through the spiritualism chapters hoping it would get back to the fun stuff but...alas...it rarely did for the rest of the book.

I’m not saying to avoid this book because I truly enjoyed the first half. However, it would have been nice if halfway through there would have been a disclaimer that the book was about to take a swift turn into a makeshift spiritualism crash course. That way if you are not interested in that, you clearly know to stop the book with a high note and not to waste your time hoping it will go back to what you were enjoying. Just my two cents.

My first audio book and I absolutely loved it. Love the book and hearing it directly from Pete made it so good. I was sad when it was over because I enjoyed the journey so much.

You’ll laugh out loud, pause and rewind to contemplate what you just heard, and fall madly in love with Pete Holmes. Excellent listen.