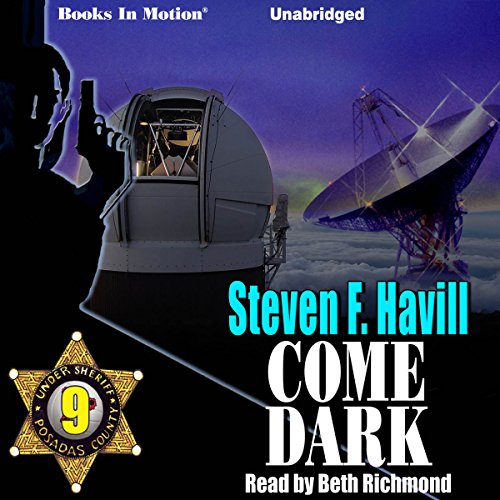 Posadas County, New Mexico, is in the news. NightZone, a mammoth astronomy theme park, is bringing in jobs, media, and such new infrastructure as a slick narrow-gauge railway to transport tourists from the village of Posadas to the tramway running up the mesa to the project's site. And the Posadas High School girls' volleyball team is on a hot winning streak, exciting everyone.

But more news, not good, breaks. Volleyball coach Clint Scott has been found gunned down in the girls' shower room, the victim of four bullets, one fired nearly point-blank into his heart. Dead for hours, killed soon after the end of last night's game. And, last night, a homegrown Banksy had tagged both one of the railway cars and a section of NightZone's giant radio telescope dish. Then, apparently, this young artist began work on a section of wall outside the girls' locker room at the high school - a project that was clearly dramatically interrupted.

With morning come two strange incidents. Stacie Willis Stewart, a former Posadas volleyball star, locks up her baby and Jack Russell terrier in her Volvo, walks away to local superstore The Spree - and disappears. A former teacher spots the child and dog before the heat can kill them. Deputy Tom Pasquale, in The Spree's parking lot, where he's spotted a suspicious Illinois plate on a Ford Fusion, watched it all. He then leads a fruitless search for her inside the store. No luck - but he does score a man with an Elvis haircut and his wife when they return to the Ford with stories that don't add up.

The lead on the murder is Undersheriff Estelle Reyes-Guzman, who's still able to call on the retired former sheriff, Bill Gastner - a good thing, for she is surprised by the arrival of her piano-prodigy son, Francisco, age 15, in a sleek Corvette driven some 1,000 miles by an 18-year-old beauty, a cellist. Their goal: to join the 100th birthday celebration for Estelle's mother.

COME DARK is Book 21 in the Posadas County Mystery series by Steven Havill (Audible call it Book 9 because it is the 9th series novel since Bill Grasner retired as sheriff of the fictional New Mexico county). The protagonist is Undersheriff Estelle Reyes-Guzman. Sheriff Robert Torrez plays a minor role in this novel. The publisher's summary sets up the novel well. Narration by Beth Richmond is wonderful.

This novel and this series are true police procedurals. The books are mysteries, but they are definitely not thrillers. COME DARK highlights the intellectual process and footwork involved by police in solving complex crimes. There is very little action and almost no suspense. The novel moves along quickly and character development is excellent.

I love the Gastner books with Rusty reading them. But I do not like Estelle and her perfect ways and her perfect family. And her narrators seem to make the stories longer (and more boring). Even the deputies are getting boring and perfect. I hope the author writes a Bill Gastner story from back when he was sheriff or under-sheriff; then bring back Rusty as narrator.

I have enjoyed all of the Bill Gastner and Posades County Mysteries but this latest in the series by Steven F Havill was a dull shadow of the previous books. All the normal characters were there but there was nothing compelling about the mystery, the interaction between the characters, the relationships that normally bring so much richness to the story… I was bored and continually waiting for something to happen to bring the story to life. I hate to write a negative review about a book in a series I have found so entertaining and rewarding. I am currently sick and perhaps that colored my perceptions of the story.