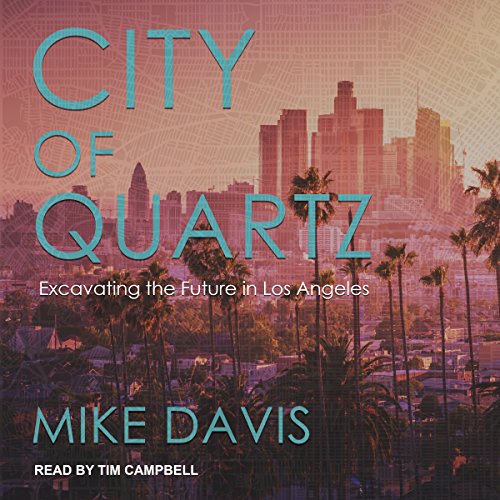 No metropolis has been more loved or more hated. To its official boosters, "Los Angeles brings it all together". To detractors, LA is a sunlit mortuary where "you can rot without feeling it". To Mike Davis, the author of this fiercely elegant and wide-ranging work of social history, Los Angeles is both utopia and dystopia, a place where the last Joshua trees are being plowed under to make room for model communities in the desert, where the rich have hired their own police to fend off street gangs, as well as armed Beirut militias.

In City of Quartz, Davis reconstructs LA's shadow history and dissects its ethereal economy. He tells us who has the power and how they hold on to it. He gives us a city of Dickensian extremes, Pynchonesque conspiracies, and a desperation straight out of Nathaniel West-a city in which we may glimpse our own future mirrored with terrifying clarity. In this new edition, Davis provides a dazzling update on the city's current status.

Interesting, leftist urban history of Los Angeles. At times feels hyperbolic and sensationalized (ex comparing widespread joblessness to literal nuclear disaster) and this is exacerbated by the reader’s dramatic voice, which is reminiscent of the Preview Man. Nonetheless some really educational and revelatory reporting on the power levers operating in LA’s geography including global finance and local politics. Written in 1990, sections on the drug wars, urban development and Latin American asylum seekers directly foreshadow current major political issues.

A People’s History of Los Angeles

City of Quartz has long been held up as the ultimate - and perhaps only - history of Los Angeles. It leaves a lot of obvious stuff (that I still want to read about) on the cutting room floor in favor of a populist history of the city through the lens of then-current events and local politics. I was shocked that for all of the recommendations this book had been given, not one mention of its socialist bent was ever even alluded to. It makes me think no one actually read it. If they had said so, I would’ve read it sooner.
It’s a little dated, doesn’t make the obvious connections it could to conclude the book, but it’s also very thoroughly researched, a solid reading, and gives great new perspective on a city I’ve called home for 15 years.

LA is presented as not a given, but as social relations made, unmade and remade in historical time, choices made by individual and group actors yes, but under conditions they ultimately didn't choose.

The metaphor of noir ties in nicely with the felt inexorability of political, social, and geographical upheavals and conflicts given the broader context of forces and relations in motion. Yet, despite this, Davis gives a sense of rebellion even in its most cynical and nihilistic forms as a creative as well as creatively destructive force. The contending classes may end in ruin but not without a fight.

Multifaceted history of a city

Interesting perspectives on Greater Los Angeles, a city I moved to in 1989 -- a year before this book was published.

It covers lots of ground and provides backgrounds of many names I've encountered -- the Chandlers, Hell's Angels, and Kaiser Permanente.

I especially appreciated the essay exploring the history of the archdiocese of Los Angeles with the long tradition of Celtic bishops over a largely Latinx flock.

The reader does make some pronunciation errors which stumble over the authority of the author. Pico Rivera becomes "Riviera" and Los Feliz unhappily becomes "Felix".

Great Insights to Where BLM Uprisings Come From Institutional Rascism

This book really gives see you insights into how Los Angeles was created including various ways over 150 years. I have no idea about the institutionalized racism that takes place here. It is truly a real estate Nirvana for the people who have made all this money all these years and these sorts of things seem to continue. If you want to learn about Los Angeles, this is a must read book. It was written in 1990 and So many of the things that happened before then repeats itself in the following 30 years. Learn your history and see why the present day is the way it is.

Been looking for a good history of LA book and this hit a lot of the subjects I was looking for.

This book reads as if it were caricature of a pretentious, negative, intellectual. So negative and full of himself. Why not just sum it up by saying that he hates LA and all it's sudo-intellectuals, phony's, celebrities and apparently anyone else that chooses to live there. He definitely knows a lot about his subject, but the way he shares this info is so negative and sanctimonious pretentious that it's impossible to listen to.

Mike Davis has done a excellent job of illustrating LA’s past, present, and future.

His ability to bring unknown and forgotten historical accounts to light, gives the reader a deeper understanding for current realities.

He draws precise parallels between corruption of the past and corruption of today. I really enjoy this book,and A mandatory read for those who want to understand why social issues look the way they do.

Hard getting through this one

I have to beat up on this book since I was very much looking forward to reading it, but I simply don't know how someone can be so cynical about, and hateful of, where they live....and then write a freaking book about it. If you hate Los Angeles so much, then move for God's sake.
This book does have some good nuggets of history in it, and it seems like he (sort of) knows his subject well, but I couldn't help feeling like I was being bludgeoned to death with hyperbolic stories of the coming apocalypse of Los Angeles. I feel sorry for this guy if this is the way he really feels about his home town.
And the overly dramatic, and again, very apocalyptic writing style just gets so old sooo quickly.
And lastly, what's up with all of the obscure references thrown around all over the place? Every other sentence has to be filled with overly complicated language and endless isms for good measure.
If this is one of the best histories that's been written about LA, as some reviews have said, then my gosh, we need to step our game up. I would honestly recommend staying away from this book and finding something a bit more balanced to read