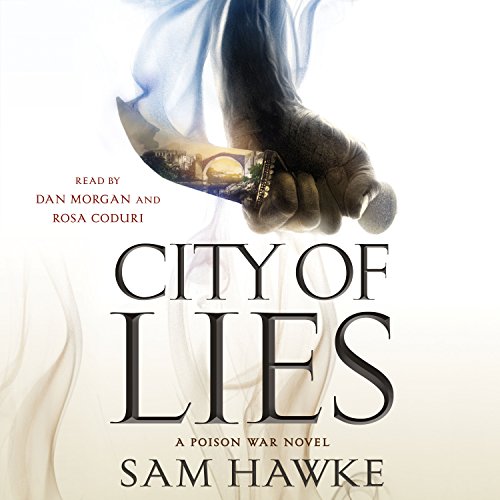 I was seven years old the first time my uncle poisoned me...

Outwardly, Jovan is the lifelong friend of the Chancellor’s charming, irresponsible Heir. Quiet. Forgettable. In secret, he's a master of poisons and chemicals, trained to protect the Chancellor’s family from treachery. When the Chancellor succumbs to an unknown poison and an army lays siege to the city, Jovan and his sister Kalina must protect the Heir and save their city-state.

But treachery lurks in every corner, and the ancient spirits of the land are rising...and angry.

In a nutshell, this book is "A Song of Ice and Fire" in miniature with a less brutal, less history based, more inventive world and better writing.

Now, the first thing you should know is the story features two POV characters with both being written in first person. But if you hate first person as much as I do, don't let that discourage you. Throughout most of the book, I barely noticed.

The audiobook has two narrators, one male and one female. Both are very good, though names were difficult to understand through the heavy British accents. And the female narrator's voices were a bit more varied.

The two main characters are both brilliantly fleshed out, though there is some redundant information in the early chapters of the book.

The story starts with an exciting scene that, while it doesn't feel vital to the story as it happens, is a major plot point in the sequence of the story.

The toxin writeups at the start of each chapter are an awesome touch that adds I huge level of depth to the story and the world.

The story takes place in a fascinating world with a ton of depth. Though magic appears to be a myth at the start, especially to the "civilized" city dwellers, we eventually find that to be false.

The story itself is a wonderful combination of spy thriller, murder mystery, political intrigue, personal drama, loss, love, and hope. All of which is combined into this huge, complex story that has me hooked almost from the first page.

No matter if you read historical fiction, mysteries, or any flavor of fantasy, this is a wonderful book that you don't want to miss!

Wooow what a great listen this one was!

This is the story of Jovan and Kalina, who are siblings and nobles who have quite close ties to the Chancellor and his heir. Because while Jovan and Tain, the Chancellor’s Heir are best friends, their relationship is rather more than that. Jovan is a proofer. This means that he’s a master of poisons, and he tastes everything that Tain eats first, just like Jovan’s uncle does for the Chancellor.

Kalina, Jovan’s older sister, started training for this, but ultimately, her body has a malady that made it so she was too weak to handle the poisons involved. So Kalina was trained in other arts that helped her keep the Chancellor’s family safe.

Suddenly, the Chancellor and Jovan and Kalina’s uncle are both poisoned by an unidentifiable substance, and not long after they succumb to it, an army masses outside the city and puts it under siege. They call the nobles of the city spirit killers and refuse to negotiate or back down.

So the hunt is on to find out who poisoned the chancellor and why, and what it has to do with this army besieging the city.

Jovan and Kalina, who tell this story in alternating first person views, were both characters that I rooted for, and very very interesting to me. Interesting in that both characters are disabled in their own way, one physically and the other mentally, but they are never portrayed as less than anyone else because of their illnesses. Kalina suffers a lifelong malady that makes her body weaker than the average woman her age, and while she does what she can to keep herself as fit as she can be, there are times when she is exhausted, sore, and just physically weak. Jovan I could relate a little better to, as he suffers from some pretty legit anxiety and OCD. It will affect him from time to time, especially if unexpected or dangerous things are happening, which they often do, or if he is stressed, which the events of this book definitely make him. I can relate, and I found that the anxieties were definitely realistically portrayed. They certainly poked at mine a little, though not enough to make listening problematic (alas, that has happened before with other books). Each sibling worries over the other because of these ailments, and the relationship between them was really quite sweet at times. The best part though, is that neither character lets their disabilities hinder them from being really awesome. Jovan at the very least actually uses his anxiety to his advantage at least once, which was really cool.

This one played out as a fantasy murder mystery, which was awesome, because I do like a good mystery in my fantasy from time to time. I really quite enjoyed trying to figure out who the baddie was, and found myself completely in the dark about it throughout the entire thing, which was great. It makes twists and turns that threw me off the scent, and revealed clues that seemed important that turned out to be unimportant and vice versa. By the end of this book, I had suspected pretty much everyone except Jovan and Kalina, and I mean everyone, lol. The last few hours of this thing were a total thrillride of wondering what was going to happen and if things that happened were really for realsies happening. My feeeeeels!

The narration for this audiobook was fantastic. Dan Morgan, who narrated Jovan’s chapters, and Rosa Coduri, who narrated Kalina’s both brought their respective characters to life for me, especially Kalina. I would turn this book on at work and fall into this world as they told the story, and suddenly it was time to go home. Audiobooks that can do that to a work day are certainly something special. :)

Reads more like a murder mystery with religion and war sprinkled in, but the writing is superb.

Also, the best opening line to a novel I have ever read. Must read for any fantasy fan!

I couldn't even really get through the book, but I believe it had more to do with disparity between my decisiveness and many of the character's indecisiveness. I was constantly struggling not to reach through the headphones and smack some of them upside the head between the story and the voicing performance exaggerating the characters indecisiveness. it was well written and still had some twists and turns for depth, but I had to stop listening after 5 hrs as it was the limit to which I could force myself to. Others may have a better experience, but for me it's a pass.

I found this audio book to be pretty disappointing, honestly. After 15 hours I just can't carry on with it. I felt like maybe it would improve if I gave it long enough but I'm tapping out. The premise was interesting and I thought the mystery of the beginning would go someplace, but it hasn't shown any signs of life so far.

The protagonists are just so...passive. And seemingly lack any talent or leaderships qualities whatsoever. Everyone else in the book seems to know more than them, be better at everything, or have some secret edge over the protagonists that it seems a miracle they didn't accidentally murder themselves by brushing their own teeth with a wet noodle.

Spending time in their company was just really irritating. Not that they were bad people. Just naive, clueless, and always reacting rather than acting.

The story itself just doesn't make sense to me either. I'm not going to go into spoilers but there are so many issues with the main plot line it ruins any kind of plausibility for me.

The narrators didn't help my impression of the book. Unlike some audio books where the narrators really add something with their performance, this duo just seemed to be lifelessly 'reading' the words, not performing them. On the other hand, the endless parenthetical statements in the midst of the dialog and 'action' sequences would have made it very hard to escape that passive voice. So perhaps I'm being too hard on them.

Passive. That probably sums up my overall impressions of the experience. Passive writing. Passive narration. Passive people. Passively waiting. Passively fretting. Powerless to act. Not even knowing what they would do if they could.

Obviously other reviewers feel very differently than I do, so take my review with a grain of salt. If you're on the fence I'd suggest listening to a sample chapter or something first. If you find yourself enraptured then awesome, feel free to ignore me. If you find it slow and uninspiring then maybe find something else. It doesn't really change over the first 15 hours.

This was a good story but it felt like it was purposely written to become a movie. The plot wasn’t very exciting but I did like the characters and I could see how it might be better as a movie

Loved it! Excellent narration. Rosa's performance reminded me of Kate Beckinsale in Underworld. Honor down one of the best debuts of the year, excellent worldbuilding, interesting characters and lots of betrayal.

A breath of fresh air

So, as a preface, I love me some grimdark. That being said, this is a wonderful tonic against the crushing depression without sacrificing mature themes. If there's not a studio executive or producer looking at this as an animated series, there absolutely should be. Anyone have Dave Filoni's number?