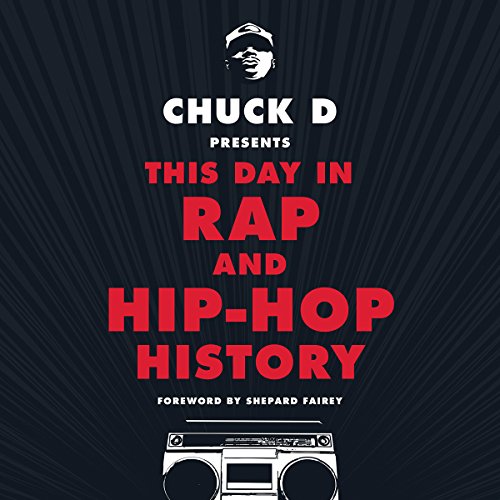 Chuck D. Presents This Day in Rap and Hip-Hop History

A one-of-a kind survey of rap and hip hop history from 1973 to today by Chuck D, arguably the most influential rapper in the world.

In the more than 40 years since the days of DJ Kool Herc and "Rapper's Delight," hip hop and rap have become a billion-dollar worldwide phenomenon. Yet there is no definitive history of the genre - until now.

Based on Chuck's long-running show on Rapstation.com, this massive compendium details the most iconic moments and influential songs in the genre's recorded history, from Kurtis Blow's "Christmas Rappin'" to The Miseducation of Lauryn Hill to Kendrick Lamar's ground-breaking verse on "Control." Also included are key events in hip hop history, from Grandmaster Flash's first scratch through Tupac's holographic appearance at Coachella.

Throughout, Chuck offers his insider's perspective on the chart toppers and show stoppers as he lived it. Illustrating the pages are more than 100 portraits from the talented artists specializing in hip hop.

"Chuck D wasn't put here to play any games. He created the greatest hip-hop album in my opinion to date, It Takes a Nation of Millions to Hold Us Back. But the very first minute he sonically appeared to us, I knew rap was changed forever. Power, awareness, strength, and militancy is his stance in a world obsessed with punishing poor people. I knew he would righteously and boldly die so that a little young boy he didn't even know from Queensbridge could live. He attacked wickedness head-on being the rappin' rhino terror that he is. He represented for all of us putting his life on the line and making the right music fighting for hip hop, the youth, truth, and justice. Chuck D made the lane for people like me to walk." (Nas)

"If you want to understand our culture. To learn knowledge itself. Truth about the art form of poetry in motion. The struggle of our community through rhyme and rhythm. This is the book that inspired me long before I found my place in hip-hop. The power of self-expression. Unapologetically. Taught by the teacher himself. Chuck D!" (Kendrick Lamar)

"Reading this book is like reliving my life all over again. Chuck D is Dope!!! (LL Cool J)

The subject matter of the book is great, but this audiobook production is poor.

First of all, the preface read by Shepard Fairey has the fidelity of a burger king bathroom - it is unlistenable.

But the more bothersome issue is the sloppy performance/production moments, of which I two stand out. First - I played it back five times and I am certain that when the reader is talking about Vanilla Ice’s To The Extreme album in the 1990 chapter, at one point he accidentally refers to him as “Ice T.” I imagine it’s an unnoticed mistake, but the target listening audience for this book are nerds like me looking for knowledge, and that’s an unsatisfying error to say the least.

The second example is what drove me to type this up. While listening to the 1993 chapter I realized that the reader reads the same passage twice in a row. In other words, we hear the passage about the release of Eazy-E’s It's On (Dr. Dre) 187um Killa on October 19th TWO TIMES IN A ROW. They are clearly distinct performances of the passage, but apparently no one caught the duplicate passage in post. So this is another sloppy mistake.

I am still on 1993 but I am going to grind my way through because I want the information. However, for the casual listener (if that exists for this book) and for someone looking forward to this audiobook release, this is all pretty underwhelming and distracting AF.