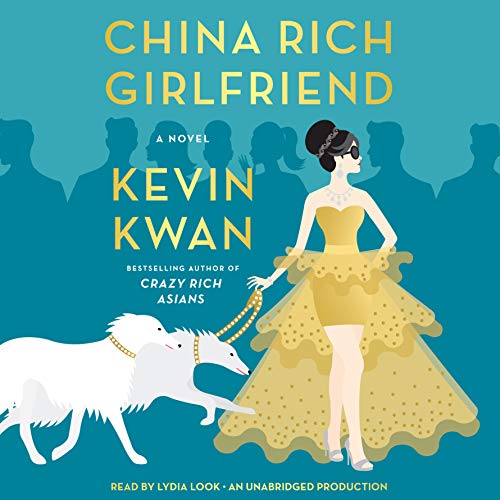 Kevin Kwan, best-selling author of Crazy Rich Asians, is back with a wickedly funny new novel of social climbing, secret emails, art-world scandal, lovesick billionaires, and the outrageous story of what happens when Rachel Chu, engaged to marry Asia's most eligible bachelor, discovers her birth father.

On the eve of her wedding to Nicholas Young, heir to one of the greatest fortunes in Asia, Rachel should be over the moon. She has a flawless Asscher-cut diamond from JAR, a wedding dress she loves more than anything found in the salons of Paris, and a fiancé willing to sacrifice his entire inheritance in order to marry her. But Rachel still mourns the fact that her birth father, a man she never knew, won't be able to walk her down the aisle. Until: A shocking revelation draws Rachel into a world of Shanghai splendor beyond anything she has ever imagined. Here we meet Carlton, a Ferrari-crashing bad boy known for Prince Harry-like antics; Colette, a celebrity girlfriend chased by fevered paparazzi; and the man Rachel has spent her entire life waiting to meet: her father. Meanwhile Singapore's It Girl, Astrid Leong, is shocked to discover that there is a downside to having a newly minted tech billionaire husband. A romp through Asia's most exclusive clubs, auction houses, and estates, China Rich Girlfriend brings us into the elite circles of Mainland China, introducing a captivating cast of characters and offering an inside glimpse at what it's like to be gloriously, crazily, China rich.

"Lydia Look is an expert narrator of this hyperbolic story of billionaires in Asia. She distinguishes between the dizzying, mostly female, cast of characters, juggling middle-aged mothers and young brides as well as bored young men." ( AudioFile)

I enjoyed the book. Not as fun as the first book. I was disappointed that a new narrator was used. She did a great job, but hearing the characters voices with different accents and intonations than I became familiar with during the first book made it hard for me to become engaged with the audiobook for the first half.

This book is easy listening. For the storyline, I just wish the author had kept it more believable. Some of the plots were out of reality. Lydia Look is a great narrator that completely brought the book to life. As a Singaporean who is well versed in Cantonese (Hong Kong Characters), Hokkien as well as Singlish, she is completely accurate in her narration. I am not sure why the other reviewers are dissing on her narration. I found her narration so good (better than the first book) that I look for other books narrated by her.

China Rich Girlfriend, like its predecessor, Crazy Rich Asians, is a light, silly, guilty pleasure of a book. Rich Asians, which I read in print, was fun because the reader could laugh along with the author at the pretensions of the super-rich and sympathize with the nice young lovers. The narrator doesn't seem to understand the intention of the author or the tone of the writing. She reads as though we should take it all seriously and leaves me, as a listener, feeling that I need to explain the book to her. Frequently Audible narrators add to my understanding of a book. In this case I feel embarrassed for the narrator.

Rachel Reduced to a Gawking Twit

I enjoyed the book but was so disappointed that Rachel has been reduced to a gawking twit - standing around and saying "wowie" to whatever spectacle is in front of her. She was such a well developed character in the first book that this is a real shame. The author uses her almost entirely as a device to represent the reader's awe in the face material excess. I think the narrator exacerbates this in her interpretation of Rachel. She reads her like a teenage voice rather than an adult woman. Lydia Look does an amazing job with all of the other characters so this is just a bad choice because otherwise she is a phenomenal narrator. All that being said I would read through whatever it takes to get to Astrid - what a great character. Looking forward to the next installation!

I came into this book very cautiously after reading the reviews. I was hoping they were going to be wrong but alas, they were right. The narrator did her best but her infections at time were all wrong and added to the cheesiness of the overall story. I couldn't get over how dumb Rachel sounded/ acted, she was nothing like the character from the first book. I guess if you're just looking for a summer read this would fit the bill, but if you're looking for a book with more substance I would definitely pass.

The narrator for Crazy Rich Asians was better

If you could sum up China Rich Girlfriend in three words, what would they be?

The continuation of the story line was as good as the first book, funny and entertaining. However, the narrator for Crazy Rich Asians, Lynn Chen, was much better. The frequently used expressions "Aiyah" "lah" and "Alamak" were perfectly accentuated by Chen, and added to the humor of the book. When you hear Lydia Look use the same words, it sounds like she is reading a typo - or an extra word that was accidentally not edited out of the text. She also does not portray the character of Rachel very well..she makes her sound like a giggly teenager, rather than the respectable economics professor that she is..the voice she uses for Rachel is over bubbly and high pitched. The narration did not ruin the book, but most certainly took away from the five stars that I gave Crazy Rich Asians.

Who would you have cast as narrator instead of Lydia Look?

It made me laugh...but not as much as Crazy Rich Asians

Didn't like this narrator. The narrator of Crazy Rich Asians was much better, this person didn't differentiate from character to character well enough.

HATE the reading of this one.

ok, so I LOVED the first book, and reader, but hate, yes HATE, this reading of the book. it is hard to listen to after hearing the first book. you really need the first reader from
'crazy rich asians'....sorry. it's a good story line, but I can't handle this reader. also, y so much cussing?! it was not necessary at all. Also I think I have heard the word 'undulating' more in these 2 books than ever in my whole life! I normally don't write such critiques, but felt these things needed addressing! again. I LOVED the books and storyline, but hated this reader. She couldn't keep the voices consistent, they always sounded a lil off. Also this reader's voice made Rachel sound kinda dumb in this book.

Hard to understand narrator, does not flow well.

Her accent is distracting and hard to follow. I am chinese american and I find the mixture between the english and chinese accents totally throws me off. I purchased the book and enjoyed it much better when I read it myself.

Narration (almost) ruined it for me!

China Rich Girlfriend was a good follow-up story to the first book, but the narration was very distracting. The narrator's pacing and transition was off (maybe due to bad editing?), her accents were terrible and there wasn't enough distinction between the characters' voices, and she gave Rachel a voice that made her sound whiny and ditzy.
I almost stopped listening to the book several times because I was so distracted by the accents that the narrator attempted to do, with some sounding borderline "racist" (ex. the uneducated-sounding accent used for the Filipina de Ayala character). I'm halfway through the book and if it weren't for the fact that I am still very much intrigued by the main characters' storylines, I probably would've stopped listening to the book early on. I wish they used the same narrator from the first book, just saying.

Really well read, with a lot of spirit. The talk of all that money and glitter can make your head spin, but there are nice twists to the story.

well read, story takes you on a whirlwind journey

How does Kevin Kwan keep dropping bombshells like that?! Performance by Lydia was great, the accents and pronunciation were 95% correct lah.

I have absolutely enjoyed listening to this audio book! The narrator did a great job. Highly recommended. :))

I am loving it! It is a modern fairy tale and well produced with a Chinese speaker!