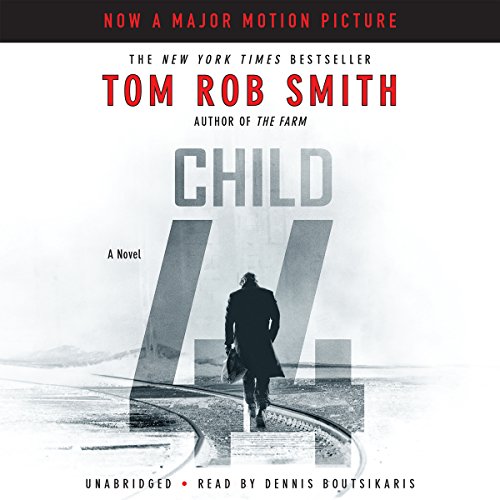 It is a society that is, officially, a paradise. Superior to the decadent West, Stalin's Soviet Union is a haven for its citizens, providing for all of their needs: education, health care, security. In exchange, all that is required is their hard work, and their loyalty and faith to the Soviet State.

Leo Demidov knows this better than most. A rising, prominent officer in the State Security force, Leo is a former war hero whose only ambition is to serve his country. To defend this workers' paradise - and to guarantee a secure life for his parents and for his wife, Raisa - Leo has spent his career guarding against threats to the State. Ideological crimes - crimes of thought, crimes of disloyalty, crimes against the revolution - are forcefully suppressed, without question.

And then the impossible happens. A different kind of criminal - a murderer - is on the loose, killing at will. At the same time, Leo finds himself demoted and denounced by his enemies, all but sentenced to death. The only way to salvage what remains of his life is to uncover this criminal. But in a society that is officially paradise, it's a crime against the state to suggest that a murderer - much less a serial killer - is in their midst.

To save his life and the lives of his family, Leo must confront the vast resources and reach of the security forces, with only Raisa remaining at his side, to find and stop a criminal that the State won't even admit exists.

" Child 44 is a remarkable debut novel - inventive, edgy and relentlessly gripping from the first page to the last." (Scott Turow)

Wow. The fake Russian accent is bad enough that the story does not appear too ludicrous in comparison. The characters are pure Cold War propaganda with the psychological depth of GI Joe.

Terror from all sides.

One amazing aspect I found in Smiths first novel is his ability to draw the reader into the personal lives of its many differing characters,to draw out empathy from the reader for the main actors situation,and feel the paranoia and fear
of living under a Stalinist regime which is just as frightening as having a serial killer roaming at will.
The characters on its surface might seem stock;each one in place, each doing what's expected in such a novel,but on deeper reading a whole other world of resourceful people come together to try to protect themselves and each other against a killer and their government that says he couldn't exist.
Dennis Boutsikaris is the perfect reader for this novel. Usually I'm distracted by a narrator affecting a foreign accent,but Boutsikaris has an evenhanded way of telling this story.His accent conveys a sense of fatalism in the characters lives,but also ,extremely(to me),the love for and between parent and children,as well as conflict between husband and wife.
This is a great book.Tom Rob Smiths experience as a script writer shows through,for good or ill.
This would be a great movie if the right director and actors could be found;or maybe we should just leave well enough alone.

Be Prepared Be Forewarned

A stark, harrowing, intense portrayal of the of Stalin's murderous reign and legacy in the Soviet Union. Complex characters and story telling in this unique setting made for a compelling listen to the end. An outstanding first novel with appeal to fans of historical novels, thrillers, and perhaps true crime. My highest recommendation.

I can't decide if I'm more impressed by the fact that this is Tom Rob Smith's first book, or by Dennis Boutsikaris' performance. Either way - it's a win all around. This is a very chilling literary thriller, both in story and in setting, but absolutely captivating. You can feel the fear and the paranoia in Boutsikaris' characterizations, and it comes as no surprise that Child 44 won a few debut fiction awards when it first came out and quickly became a listener favorite.

Beginning with a description of the blight of Russian communism in the 1930's your stomach will actually cry for food. This book really draws you in so you feel for the characters. After two years of listening to audiobooks this is my overall favorite. There are several well developed characters, all of which are 100% believable. You will not regret getting this book, I am recommending it to everyone. Many stories of this type suffer from predictability, and this usually causes me to shy away from detective novels. This is not the case for "Child 44". Another high point is the narration, it is clear, articulate and imitates a perfect russian accent when appropriate.

Child 44 is presented as a thriller; a Russian Agent, Leo Demidov, tracking a serial killer in communist Russia. While the novel is most certainly a thriller – and an exceptional one at that – it’s also an extremely personal story that explores how two people can have completely different perceptions of the relationship they are in.

The way Tom Rob Smith develops and reveals these relationships is done with care, pacing, and flawless planning. Time and again, we are presented with different situations and different combinations of people that have for years co-existed without ever knowing what the other was thinking or feeling. The balance between the exploration of these relationships and the action of the murder investigation is perfect, and the author manages to weave them together into a single absorbing story. For anyone who enjoys thrillers but demands strong character development, this story is a nearly sure bet.

I was taken off guard by the first scene in the story, and considered turning it off, thinking the book was not for me. I’m so glad I gave it a little more time, and urge anyone that isn’t thrilled with the very beginning of the novel to give it a little longer and let the story really get started. For me, quitting would have been a huge mistake.

Mentioning the skill of Dennis Boutsikaris will be unnecessary for most Audible listeners, who will already be aware of the value he brings to everything he reads.

A phenomenal book on every level.

NOT A WALK IN THE PARK FOR SURE, BUT WORTH IT!

Grisly, chilling, yet it'll wrap you up and you will think about it long after it's finished. The background of 50s Soviet life is fascinating as a backdrop. The final twist is a bit unbelievable but it doesn't take away from the impact of the story. Recommend this one highly but if you are squeamish, better stick to Disney.

Rarely is an audiobook so compelling, so absorbing from beginning to end, as this one was. I found myself sitting in the car after getting to work, wishing I could continue listening, and plugging the headphones back into my ears at the end of my 8 hours, eager to resume the tale.
Some stories have nothing but action. Some get carried away with descriptive passages. Some focus so intensely on characters that the story line is too thin. This one has the perfect balance of all three elements -- memorable characters, nail-bitting plot, and evocative descriptions.
I can hardly wait for the author's next book.

This is essentially a detective story set inside the Soviet Union near the end of Stalin's reign. You have to suspend disbelief with regard to some of the plot twists, but it's well worth it. In addition, the setting -- a communist state with higher regard for appearances than justice -- is like another character in the book. Be warned that the story involves the murders of children, and it's a little gruesome.

It appears that this book is the first in a possible series with the same protagonist. I'll listen to those that follow.

Excellent audible novel. Engrossing, easily accessible story. Very well narrated. Think I actually listened to every word, which is rare for me! Both myself and my partner thoroughly enjoyed this book on our commute everyday - we have slightly different tastes in literature, so that is a good endorsement!

Add to that the fact that this is a debut novel, and I'm left in astonishment. Where does an author go when he's this good out of the starting gate?

The story of Child 44 is the story of Leo, an agent of the security police in Russia at the end of the Stalinist and the beginning of the Krushchev periods. It is the story of his wife, Raisa, and it is the story of Russia during a time when she feared her own people more than any other. The story would have been fascinating in any setting, but in the stark world of Russian communism, it is riveting.

From George Orwell with Love

If you think George Orwell's dystopian novel 1984 is depressing, wake up to the horrors of the Stalin era in post war Russia.

"Child 44" is a crime story, the story of a serial killer and in this, it is not much different from other good thrillers, but Tom Rob Smith made so much more out of it. In "Child 44" Stalin's horrific and totalitarian regime is described in vivid and gut wrenching detail. It is heartbreaking and terrible to read, what it does to people, their relationships and their lives. The story shows, how paranoia, distrust and the instinct to survive poison the essence of humanity and even eat away, whatever love still exists. In all its terror, there is not much embellishment, the narrative sounds convincingly authentic and rings very true.

Leo is a young officer of the secret police and he is a true believer. He realizes that some aspects of his work are cruel and unfair, but he is convinced that the greater good of a perfect communist society justifies these sacrifices. Apart from that, he readily accepts the benefits from his position, a nice apartment, better food and so on.

When a little boy, the son of a colleague is brutally murdered, he refuses to investigate the crime. He is convinced, it was an accident. In a perfect society is no place for murder, crime is part of the decadent, capitalistic West. Investigating a crime might put his career at risk.

Leo's world falls apart, when his wife is suspected of espionage and he has to partake in the investigation. He is expected to prove his loyalty to the state and sacrifice the life of his wife. Leo knows that his wife is innocent, but standing up for her, would put everything at risk, perhaps even his own life.

Some reviews complained about the speaker, I cannot understand why. He did a good job and his indication of a Russian accent is extremely subtle.

This was, without a doubt, one of the best books i have ever read/heard.