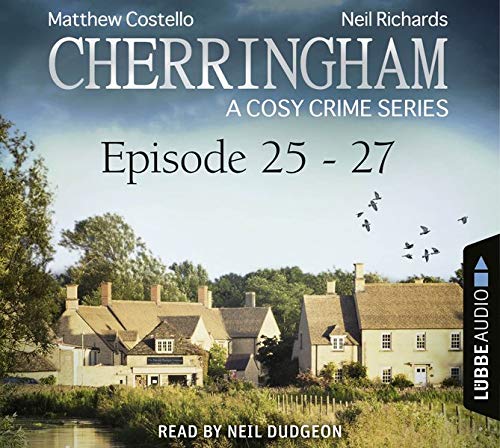 Jack's a retired ex-cop from New York, seeking the simple life in Cherringham. Sarah's a Web designer who's moved back to the village to find herself. But their lives are anything but quiet as the two team up to solve Cherringham's criminal mysteries. This compilation contains episodes 25 - 27.

Secret Santa
Bill Vokes has played Santa at the children's Christmas show for years. But with the show just hours away, he vanishes with no explanation. The whole village is baffled. Did something bad happen to loveable Bill: upstanding citizen, churchgoer, life and soul of the party and the holiday season?

Scared to Death
When classic horror movie star Basil Coates becomes the victim of a series of scary pranks, the local police put it down to a crazed fan. Just pranks, after all ... But with Halloween only days away, the spectre of murder suddenly visits the ghostly Coates mansion on the hill outside Cherringham - and Jack and Sarah find themselves caught in a mystery worthy of Basil's spookiest roles ...

Death on a Moonlit Night
When the boss of the big local DIY outlet is murdered on a moonlit night, all the evidence points to the store's junior manager. And when police retrieve the murder weapon from the Thames, the manager goes on the run. But Jack and Sarah are not at all sure of his guilt. Can they uncover the real killer before it's too late for the runaway suspect?

Co-authors Neil Richards (based in the UK) and Matthew Costello (based in the US), have been writing together since the mid 90's, creating content and working on projects for the BBC, Disney Channel, Sony, ABC, Eidos, and Nintendo to name but a few. Their transatlantic collaboration has underpinned scores of TV drama scripts, computer games, radio shows, and - most recently - the successful crime fiction series Cherringham. The narrator of the audiobook, Neil Dudgeon, has been in many British television programmes including the roles of 'DCI John Barnaby' in 'Midsomer Murders' and 'Jim Riley' in 'The Life of Riley'. He is also known for his film roles in 'The Nativity', 'Sorted' and 'Son of Rambow'. In 2012 Dudgeon starred as 'Norman Birkett' on BBC Radio 4's Afternoon Play series written by Caroline and David Stafford.

I think they forgot they left us on a cliffhanger.

Do Not Buy - Previously Issued Stories

Two of these stories are repeats. Audible has some explaining to do. This is not a new collection.

I got this compilation only to discover that books 25 and 26 were previously released in other compilations. I am returning the book because of this. Audible, you need to fix this.

I love the series but when this one came out it was a compilation of two old ones with one new one. I was sadly inferred that it was to be three new stories.

UPDATE! I did some research and discovered you need to read (or listen as I so love to do!) “Dead in the Water” before reading this book to complete the cliffhanger. Love this series! But did the writers just forget they left us with a cliff hanger in the last series?? Several questions unanswered! Not happy

Not all new stories.

If you buy this three book series, just be aware that the first story is a Christmas novella that you may have already read. I started it and thought the story sounded familiar, went back to my Kindle, and realized I had already read the Christmas novella. These audible books are not expensive and it is still worth the price, but it was particularly notable because it is out of order from the story I had just read which had a bit of a cliffhanger ending and the season wasn’t right. Again, I’m just mentioning it so people will be aware. I still love all of these books.

why end the last story with such a cliffhanger and then ignore it completely in episode 25. why not just finish with the birthday party. what was the whole point of the accident. readers would be waiting to hear what happens to Jacks family and everything. so disappointing.

Make sure you read/ listen to "Dead in the Water" before this 3 book compilation as that also answers the cliff hanger of episode 24. Listened to two and was a little confused. Some others mentioned that there were duplicates, or just secret Santa, but I had all new and 3 books. Was a good Cherringham listen