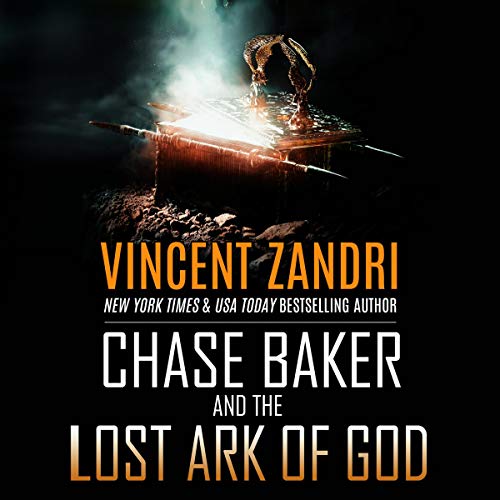 Chase Baker and the Lost Ark of God

Does the Ark of the Covenant, or what’s also known as the Ark of God, truly exist? Adventurer, writer, and treasure hunter, Chase Baker is about to find out, the hard way.

Adventurer, Chase Baker is back in the thick of it. This time, he along with his sexy and adventuring archaeologist partner, Dr. Sarah Gibson, are entrusted by both a wealthy financier and an old English, Paris based Biblical scholar to unearth perhaps the greatest archaeological treasure of all time: The Ark of the Covenant. Or what’s also known as the Ark of God.

An adventure that begins in the mean streets of hot downtown Cairo, then reaches downtown Paris, and that quickly leads to the disputed Biblical territories of Old Jerusalem, Chase and Sarah encounter bandits who know precisely what their mission is. To find the Ark of God and deliver it to government officials in the United States.

But the ark is a force of unspeakable power. Any nation that has it in its possession is said to be undefeatable in time of war. It’s a somewhat familiar plot that was played out in Hollywood by Indiana Jones back when Chase was just a boy. But now that he’s a man, he realizes just how real the power of the ark truly is. Not only is Communist China on the hunt for the Ark, but so are radical Jihadists, bent on using its power to destroy western civilization.

What the rugged adventurer will also discover, is that the Lost Ark of God is to be found in the most unlikely of places. Deep under Golgotha, or the hill where Jesus was crucified 2,000 years ago. Once he and Sarah gain entry to the tunnel, they will face several potentially deadly challenges and booby-traps that will not only test their skill as adventurers, but also their very belief in the power of God. What they are in for, is one terrifying journey that will leave readers begging for more.

Don't wait another minute. Scroll up and grab the latest episode in the best-selling Chase Baker action/romantic adventure series today: Chase Baker and the Lost Ark of God!

Race to the finish!

Chase Baker, the man of many faces. Once again, Chase Baker takes on his nom de plume as Indiana Jones to uncover another ancient artifact. This time it is the Ark of the Covenant or the Ark of God. The Ark is described in the Book of Exodus as containing the two stone tablets of the Ten Commandments. The ark vanished when the Babylonians conquered Jerusalem in 587 B.C... In this exciting tale, the Ark is supposedly discovered beneath the Dome of the Rock in Palestine, and Chase is recruited to retrieve it. Dr. Sarah Gibson, archaeologist, and lover is Chase’s partner in this tale. The story began well with Chase being his normal witty, ladies-man self. Whether or not the Ark was found, I’ll leave it for you to discover but for me, the ending was rushed. Sarah is a plus but not enough to save this Greyhound. Woof! This is not a favorite, and not up to Zandri’s usual standards. Three.point.five. I was given this free review copy audiobook at my request and have voluntarily left this review.

This is another good Zandri novel. Chase Baker is not quite the ladies man he was in some of the others that I listened to, but still has a beautiful woman at his side. Overall I don't think this was quite as good as some of the others, but still a fun listen with plenty of action and adventure. Basically, if you have read/listened to any other Zandri novels, you know what to expect. If not, WHY NOT? This is a fast paced thriller, but may come across as blasphemous to a strict, devout Christian because it hints at strange origins to Christianity. But if you can treat it as a work of fiction, it is enjoyable.

I was given a free copy of this audiobook in exchange for an honest review.