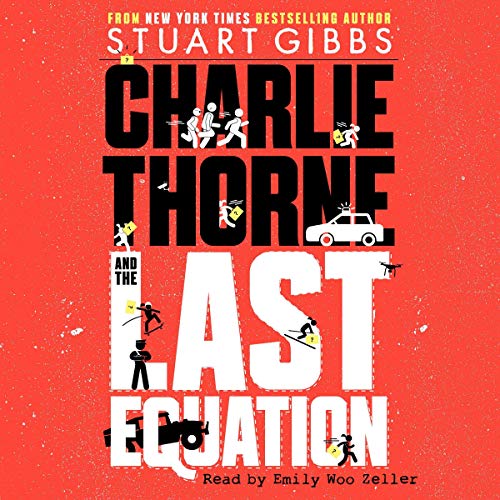 Charlie Thorne and the Last Equation

Charlie Thorne and the Last Equation

From New York Times best-selling author Stuart Gibbs comes the first novel in a thrilling new series about the world’s youngest and smartest genius who’s forced to use her unbelievable code-breaking skills to outsmart Einstein.

Decades ago, Albert Einstein devised an equation that could benefit all life on earth - or destroy it. Fearing what would happen if the equation fell into the wrong hands, he hid it.

But now, a diabolical group known as the Furies are closing in on its location. In desperation, a team of CIA agents drags Charlie into the hunt, needing her brilliance to find it first - even though this means placing her life in grave danger.

In a breakneck adventure that spans the globe, Charlie must crack a complex code created by Einstein himself, struggle to survive in a world where no one can be trusted, and fight to keep the last equation safe once and for all.

Hard to listen to

Stuart Gibbs is one of our favorite authors to go to when looking for a book for an upcoming road trip with our kids but this story feels a a bit over the top even for a Stuart Gibbs book. That alone wouldn't be a reason not to like the story though the real problem is the horrible performance by the narrator. Half the story takes place in peoples thoughts and anytime someone is "thinking something" the narrator reads in a very soft voice so that it's obvious the character is thinking as opposed to speaking. There are two problems with this approach though first it's already obvious whats going on so it's unnecessary to emphasize it like this and second she is genuinely hard to hear when she's speaking softly so you have to either constantly adjust the volume to hear what is being whispered/thought or you have to listen to the entire story at an uncomfortably loud volume. We have never not finished a Stuart Gibbs book (we own and have listened to every single one of his audio books many of them multiple times) but have but as a family we agreed that this book was just to painful to listen to stopped about half way through the story.

The story is very Stuart Gibbs. If you like Spy School and Moon Base Alpha, I think you’ll like this one. But the narration is so bad! Actually, all the dialogue is fine, but between impressions, Weller speaks so softly that it’s impossible to set an appropriate volume.

Loved everything! I recommend this book to anyone who loves action but loves emotions to be in it to. Listen till the very end!

My family loved the space case trilogy books & wished there were more, however we stumbled upon another book by Stuart Gibbs & were excited to listen to it. My daughter appreciated that this one had a female protagonist instead of a boy. Both my kids (boy & girl) equally loved this book & it had us on the edge of our seats with many cliffhanger moments. We can’t wait for the continuation of this series & learning more about Charlie’s amazing talents & Pandora! :)

We love Stuart Gibbs books, and we love the story of Charlie Thorne and the Last Equation, but the narrator for this one ruins the book. So sad. We finished it bc we were on a road trip with no other books downloaded, but have never relistened, unlike the other Stuart Gibbs books. I pray they find a new narrator if SG writes more CT books.