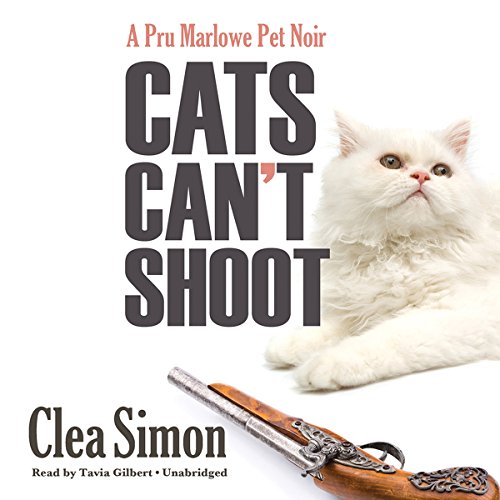 When Pru Marlowe gets the call that there’s been a cat shooting, she’s furious. Animal brutality is one thing that this tough animal psychic won’t stand for, and in her role as a behaviorist, she’s determined to care for the traumatized pet.

But when Pru finds out that it was the cat who did the shooting—accidentally setting off a rare dueling pistol—she realizes something else is going on. Could the white Persian really have killed her owner, or did the whole bloody mess have something to do with one pricey collectible?

With the white cat turning a deaf ear to her questions, Pru must tune in to Beauville’s other pampered residents, from the dead man’s elite social set to their equally spoiled pets, to learn the truth, before her ex, a former New York cop, gets too close.

In a world where value is determined by a price tag, the pedigreed puss may have a reason for revenge, and only Pru Marlowe and her trusty tabby, Wallis, can figure out whether this was a case of feline felony or if some human has set up the Persian as the ultimate cat’s-paw.

I felt similarly about this book as I did about book 1 Dogs Don't Lie. I liked the narrator whose portrayal of Pru is perfect. I enjoy the animal communication. But again, I am not entirely sure I bought into the mystery and its resolution. Also sometimes Pru makes me cringe. She doesn't always have any sort of plans for her "investigations" beyond just showing up - whether at someone's house or a funeral - and just asking inappropriate questions. I'll rate this on a little lower than book 1 because I thought it should be better than the first but it wasn't. Also, I thought more was going to happen than actually did. Pru kept having these headaches I was sure were leading to some breakthrough in her animal communication, but apparently she just had some headaches. Mini spoiler here starting now** I also had flashbacks to childhood episodes of batman when the killer decides to just leave Pru on the side of the road with bad weather coming in and assume she'll die. Really? That's your plan?**

What made the experience of listening to Cats Can’t Shoot the most enjoyable?

Tavia Gilbert! Secondly, the plot and the main character. I love animals and that's what also drew me.

Yes, I wanted to find out the real reason the dude died

Have you listened to any of Tavia Gilbert’s other performances before? How does this one compare?

Yes! She's a great performer! I've read all the night huntress books plus others and this one stacks up!

Def worth a download! Also get Dogs Don't Lie!