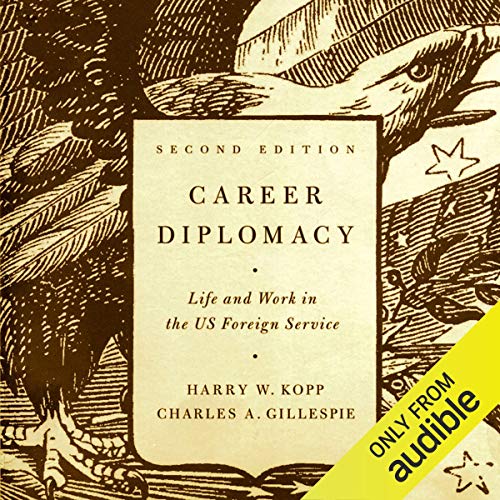 Career Diplomacy - now in its second edition - is an insider's guide that examines the foreign service as an institution, a profession, and a career. Harry W. Kopp and Charles A. Gillespie, both of whom had long and distinguished careers in the foreign service, provide a full and well-rounded picture of the organization, its place in history, its strengths and weaknesses, and its role in American foreign affairs. Based on their own experiences and through interviews with over 100 current and former foreign service officers and specialists, the authors lay out what to expect in a foreign service career, from the entrance exam through midcareer and into the senior service - how the service works on paper, and in practice.

The second edition addresses major changes that have occurred since 2007: the controversial effort to build an expeditionary foreign service to lead the work of stabilization and reconstruction in fragile states; deepening cooperation with the U.S. military and the changing role of the service in Iraq and Afghanistan; the ongoing surge in foreign service recruitment and hiring at the Department of State and U.S. Agency for International Development; and the growing integration of USAID's budget and mission with those of the Department of State.

The book is published by Georgetown University Press.

"Rare are the books that can appeal to several audiences, but Career Diplomacy is one of them.... this volume should be of interest to the general reading public, aspiring diplomats and practicing FSOs alike." ( Foreign Service Journal)
"As an introduction to the profession for the layperson or for anyone considering a commitment to the Foreign Service career the book is authoritative, complete and indispensable. For the rest of us, it's a delight, a stylishly told reminder of who we are, what we do and where we may be heading." ( American Diplomacy)
" Career Diplomacy is the best description of life in the foreign service - its challenges, dangers, satisfactions, and fun - I have ever seen." (Lawrence S. Eagleburger, former US Secretary of State)

A Great Overview of Foreign Service

This book gave great insight into many of the aspects of foreign service. Though interesting, some parts become a little boring. The speaker's tone abd pace helped a lot with these portions.

a must for the FSOT

I loved hearing this read. must listen for those who want to join the FSO