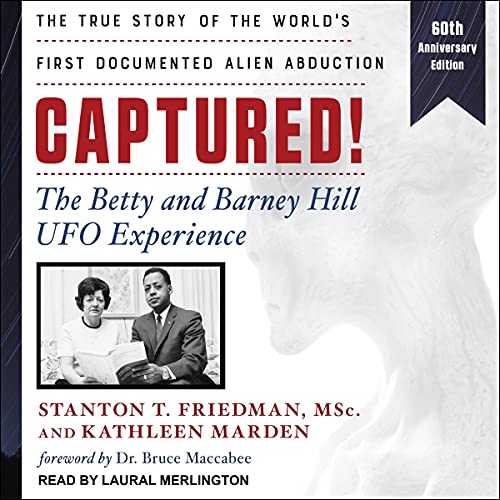 Today, 60 years after the UFO abduction of Betty and Barney Hill, more and more people are convinced that UFOs are real and their existence is being covered up by the government. If you have doubts or questions about the Hill case or alien experiences in general, Captured! will give you the answers you're searching for.

The 1961 abduction of the Hills stirred worldwide interest and enthralled the public and media for decades. It also became a target for debunkers, who still attack it today. But the complete story of what really happened that day, its effect on the participants, and the findings of investigators has never been told - until now.

In Captured!, you'll get an insider's look at the alien abduction, previously unpublished information about the lives of the Hills before and after Barney's death in 1969, their status as celebrities, Betty's experiences as a UFO investigator, and other activities before her death in 2004. Kathleen Marden, Betty Hill's niece, shares details from her discussions with Betty and from the evidence of the UFO abduction. In addition, coauthor, physicist, and ufologist Stanton T. Friedman reviews and refutes the arguments of those who have attacked the Hill case, including the star map Betty Hill saw inside the craft and later recreated.

I have followed the Hills account since I first heard it as a late teen! I experienced an encounter at my rural home when I was around 12 years old (not a close up but a sighting) and the subject has intrigued me for years! I hope a lot of people read this and are encouraged to talk. I believe and I would love to see the aliens come forward to let themselves be known.

I've wanted to learn about the Betty and Barney Hill story for a long time. The way the material was put together in this book, as well as the way it was read, were all positive for me. I found myself able to follow along, and particularly enjoyed the hypnosis descriptions, as well as the candid remarks outlining when discrepancies came about.

I had seen the made for TV movie when I was a kid and it stuck with me. This adds more details to that story.

Science always lags BEHIND truth - this lagging keeps us in the uncertain dark as we try to understand the TRUTH of anything . IN TIME .. TRUTH … will be exposed . The Betty and Barney Hill story happened in 1961- 61 years ago … this book , updated by persons seeking truth is worthwhile to read . Maybe we will need another 61 years to finally have the TRUTH . Recommended reading on this subject.

If you see this review please try a sample to see if you can stomach the reader. Great book with the details I hoped for. Worth the listen.

Book has not changed

Book was free. Now it’s been removed and replaced by “60th anniversary” which is THE EXACT SAME! #Scam

Read by a TTS?

Honestly, my first thought when I started playing this audiobook was: Is this read by a less sophisticated text-to-speech system? The first chapters were read in a such monotonus and emotionless way that it was hard to stay awake.

Later the tone changed or I got used to it, who knows?

Regarding the story I'd say that everybody with even a minute interest in ufology should be familiar with the Hill's case. Still interesting to listen to, until in later chapters it develops into a mixture of several other parapsychicological cases like poltergeist activity and such...

Would I recommed this book? Yes and no. If you can stand the way it is read, its first part is ok. In the later parts it's still good for one or more shakes of the head. You probably know what I mean: don't take it too seriously and you'll be more or less entertained. :-)