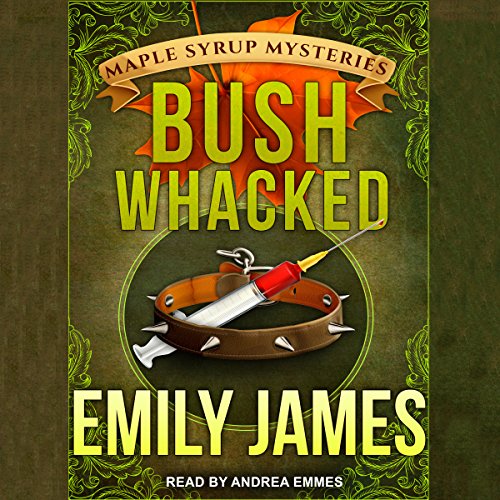 Former lawyer Nicole Fitzhenry-Dawes has packed up her life in Washington, D.C., to move to the tourist town of Fair Haven, Michigan, and take over the maple syrup business she inherited from her uncle. But trouble seems to find Nicole wherever she goes.

Caught in a snow storm on her way into town, she hits what she thinks is a deer. It turns out to be the manager of the local animal shelter, and the collision isn't the primary cause of death.

Feeling guilty anyway, Nicole convinces the interim police chief to allow her to help with the case, even though she's also busy trying to settle in to her new role as owner of Sugarwood and figure out her unusual friendship with the county medical examiner.

As Nicole closes in on being able to put the killer behind bars, will she manage to find the evidence she needs before the murderer puts her in a cage - or a body bag instead?

Nicole Fitzhenry-Dawes is heading back to Fair Haven, Michigan, having packed up her home in Virginia and permanently moved to her uncle’s home (now hers) at Sugarwood Farm. Trying to drive in a blinding snow storm where she can barely see ahead of her, she bumps into something that she thinks is a deer, only to find that she’s hit a man. Believing she’s killed him, and with no one in sight, she runs for help, only to be locked up in jail for drunk driving (no breath test, no phone call). Awaking the next morning, Nicole learns that the night clerk wasn’t an officer at all, and he has since been fired. And the man she hit was already dead, from a lethal injection of some sort. Not only that he’s a good friend of Eric’s, the interim police chief. They had served in the military together, and the dead man was the manager of the local animal shelter. This cozy mystery is right up my alley, enjoyable, interesting and I learned a lot about the maple syrup business, which was fun. The rivalry between Eric and Mark for Nicole’s affections is also a good part of the book . . . and I am ready for Mark to spill the beans about his past. I didn’t figure out who the murderer was at all, but Nicole, who has a nose for such things, sure did! Great listen!

Another exciting, heart touching story of a girl changing her whole life. Wonderful character's that are working to know each other. The one thing bothers me is....Why doesn't she use her uncle's car that was willed to her in the first book???

Emily James has again written an excellent book. She has now become my favorite mystery writer taking Sue Grafton's place. Many times in a book you are quietly hoping something doesn't happen and it always does . With Emily James that is not the case.Her surprises are fair and in touch with her characters . I read a Sticky Inheritance and enjoyed it so much. I couldn't wait to hear Bush whacked and I just finished it. It was great. I do have one little problem with the story that if it was in my power I would go to Michigan and set a certain couple straight. I can't wait to start the next book in this series. Andrea Emmes has also become my favorite Narrator displacing Judy Kaye.Her talent makes listening to audio books so enjoyable.I listen to a lot of audio books and I am not always impressed by the narrator , but with Andrea Emmes I am never disappointed.I think Emily James and Andrea Emmes are a winning combination and I highly recommend This book as well as A Sticky Inheritance.

But you're killing me with the relationship fiasco. It has been obvious since the first book what is going on but hard to believe it never came out in all those months of talking. How long until the next one?