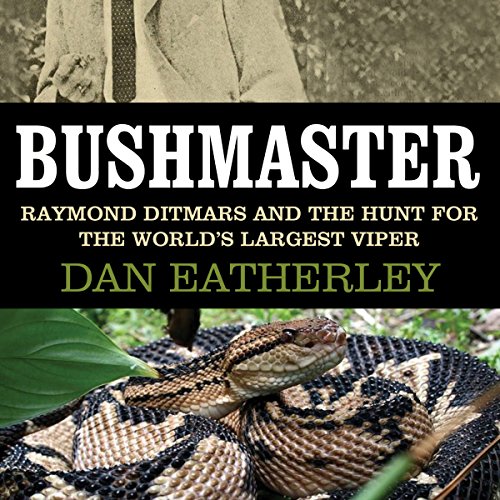 The amazing story of one man's obsession with an enigmatic and deadly reptile. Raymond Ditmars (1876-1942), the first curator of reptiles at New York's famous Bronx Zoo, brought cold-blooded animals to public attention as never before. Through wildly successful books and movies, he inspired a generation of zoologists with his fascination for snakes, insects, and other misunderstood creatures. Ditmars was among the most celebrated naturalists in America. His reptile-collecting trips for the zoo spawned newspaper headlines across the world. Although a serpent lover, he was all too aware of the devastating effects of snakebites and was instrumental in the development of antivenin. His films and writings brought him fame, but he remained a devoted zoo employee, doing what he loved most: caring for animals.

Bushmaster tells the story of this remarkable man and what became an obsession with the mysterious bushmaster of the South American rainforest. Measuring up to 13 feet in length, this is the world's largest viper, and its scientific name, Lachesis muta, translates as "silent fate." Despite numerous expeditions to jungles from Honduras to Brazil, Ditmars could never capture a bushmaster for himself. Now, British author Dan Eatherley follows in Ditmars's footsteps, revisiting his early haunts in the United States and South America. He attempts to do what Ditmars himself failed to achieve: to find a bushmaster in the wild. But 80 years later, will Dan have any more luck? Through the author's own quest, Bushmaster reveals the life of a pioneer herpetologist, wildlife filmmaker, and zoo curator.

The narration was singularly horrible. Turned what might have been an interesting story into something I just wanted to end.