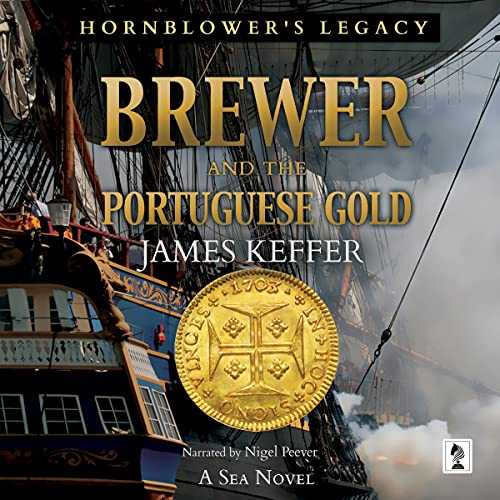 Brewer and the Portuguese Gold

Newly promoted to captain, William Brewer is tasked to serve and defend British interests in the waters off Brazil. But who defines what constitutes Britain’s Interests? Portugal’s former colony is declaring independence, and an independent Brazil might better serve Britain’s economic development. King George, however, chooses to support Portugal’s monarch and his efforts to retain the colony. At the very least, Portugal’s king wants to retrieve the royal treasury that was sent to Brazil for safekeeping during the Napoleonic wars. So British ships are sent to support Portugal’s interests, even when many of the captains - and even more of the crewmen - are more than sympathetic towards Brazil.

The age of sail is nearing its zenith: Ships are faster, navies wield more influence, and modernizations are improving shipboard life. But Brewer is inheriting a ship whose previous captain exercised brutal control over his men until crew members mutinied against him. No less a personage than Admiral Hornblower is hoping Brewer can restore morale before it’s too late. But it may already be too late, at least for some. And it certainly doesn’t make Brewer’s job any easier when a renegade British officer takes it upon himself to champion Brazil’s cause. Admiral Cochrane audaciously sets out to recruit disgruntled British sailors for the new Brazilian Navy - at a much higher rate of pay!

At the risk of starting a war with Brazil, a small fleet of British ships led by Admiral Hardy is tasked with spiriting away a royal fortune in Portuguese gold across the pirate-ridden waters of the Atlantic. It will take the combined ingenuity and skill of Brewer, his officers, and crew to even have a chance of accomplishing their mission.

I enjoy most tall ship novels. The Brewer series is good fun. This volume is at times a little disjointed and ends abruptly leaving it set for the next in the series, but nonetheless was enjoyable and fun.
I believe that Peever's outstanding narration and production work makes the audiobook very worth your while.

Really enjoyed this book, the recording was excellent along with some sound effects that enhance the listen.

I hate it when it ends!

Oh, my God! The Brewer series are the very best books! And Nigel Peever brings them to life. You always can tell when an author, his book and the narrator are meant to be together and the work is pure gold. It is when you find yourself laughing at the jokes, smiling and sad. The only thing I DON'T like.... is that I have to wait to find out how Mr. Green is doing. 😒