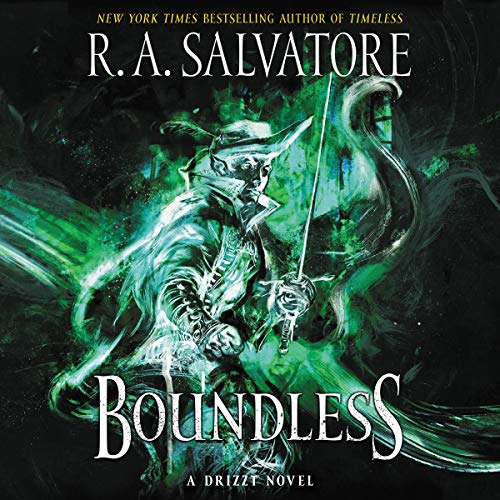 Split between time and two worlds, Zaknafein had always been conflicted. That inner turmoil was magnified by his inferior position as a male dark elf in the matriarchal drow society. Only his status as one of the greatest warriors - as well as his friendship with the mercenary Jarlaxle - kept him sane. When he finally perished, he was content knowing he left behind a legacy as substantial as his son, Drizzt.

Except...someone isn’t ready for Zaknafein to be dead. And now he’s back, hundreds of years later, in a world he doesn’t recognize. His son’s companions are not the prideful - and bigoted - males the drow warrior was accustomed to in his previous life. Drizzt’s circle includes dwarves, elves, and, perhaps worst of all, a human wife.

Struggling to navigate this transformed new world, Zaknafein realizes that some things have not changed: the threat of demons and the machinations of a drow matron no longer content with her family’s position in the ranks of Houses.

Though he has been displaced in time, Zaknafein is still a warrior. And no matter what prejudices he must overcome, he knows he will do his duty and fight by Drizzt’s side to stem the tide of darkness that threatens the Realms.

Nothing but filler and disappointment. Again.

Boring, wasteful, disappointing... these are just a few words I'd use to describe Boundless. The flashbacks to Zaknafein and Jarlaxle are the only parts worth listening too. The rest of the book was just filler for that basically. Good characters like Entreri are taked out of commission and left in the penalty box while garbage-tier characters like Dahlia and the perpetually worthless Regis are pushed to the forefront. I can only hope that the last book of this trilogy will make up for the horrible middle book.

it's as if the beginning and end happened all at once. Drittz was hardly in the story at all. and you couldn't tell If they were in the past or in the present or at least I couldn't. this just wasn't a good story if compared to the last stories. highly disappointed and I've read every book.

The last Drizzt book I will ever buy

I have bought every Drizzt book to date over the years and I’m sad to say I’m done. This book is maybe 1/3 of a book. As I’m typing this there might be spoilers. I will say that I Love the Drizzt character but this books are horrendous. - It starts off I’m what would be at least Chapter 5 for any other full book. - The rest of the book is nothing but overly detailed fights with no explanation of why anything in the main plot is happening or the books supposed subplots. - The climax of the book, the big bad monsters were anticlimactic and the final showdown between Drizzt and the big bad unstoppable golem consisted of Drizzt literally running from it for multiple chapters. Then ending in the lay 2 minutes of the book. - I feel ripped off and left without any explanation of anything or even an ending. It’s not even a cliffhanger. The book just stops. I will be asking for my money back and am sadly done with these books. I love Drizzt and want more but refuse to support garbage writing like this.

GREAT!! GREAT!! GREAT!! Thoroughly enjoy all books concerning Jarlaxle and Zaknafein and the intrigues with the Matrons of Lloth. Please continue expanding these subjects without Drizzt since it creates incredible backstories.

No ending trill and great cliff hanger by chapters

Since 98, I have been a RA Salvatore follower. 4 books behind I thought that there was no way to make another great trilogy that drizzt was good but it was enough. He found a way to make a great serie, this particular book have tremendous changes going back and forth between the present and the old mezoberranza where Zaknafain and Jarlaxle reign. Best ending from all the 37 books he have written from the drizzt sagas.

Victor is an amazing narrator, making the book that much better. just another amazing book. keep them coming please!

Ok, let me start by saying what every reviewer says, I am a huge fan of Salvatore's. i have listened to or read every book in the Drizzt line. most of which i enjoyed immensely. This one was not my least favorite, but close and I fear speaks even worse for what is to come. one of my frustrations is the inner monologue of Drizzt that tends to sound like reason until I remember that it is from a fully make believe world. I realize that some situations can mimic real life but others are steeped in to much fantasy to have any real bearing on how to live, but that is what we are to garner from them. I could go on about this but I think it unnecessary. The rest of the story felt like a soap opera; bouncing from one story to the next. Just as I got interested in one it was gone and now i have a slow start to a whole other one. Then as they come back around it took time to remember just what was happening in the story from before. I felt myself missing parts of each story thinking about others and not even caring that I did. Honestly I think he is on to something that could be great if he can detangle it from the webs that fog its creativity. ok enough of that. if you like Drzzt, listen to it, if you dont, this part of the series isn't going to pull you in.

The Spiderman 3 of Drizzt Novels.

introduces a bunch of plot points, resolves none of them. too much in the air.

Wait for the 3rd book to come out before getting this one. This is classic Salvatore. The best parts of this are the flashbacks. Everything else is all too typical of a 2nd book in a trilogy for Salvatore. Someone is presumed dead or close to death(check), the hero's got sucker punched; overrun by vast forces and never quite recovered(check). I'm sick of the way he writes Wulgar now. If you want to kill him then do it but give us the old Wulfgar back for a whole book because this one is a meek turd whose hammer can barely blast a single target where it used to cause pure devastation. He's flirting with the Goku paradigm more and more pertaining to Drizzt. It's getting to the point that Drizzt will have to fight gods to get a challenging fight because of the opponent's and abilities he pulls out of his butt. Regis...well one book hes a walking do it all, the next he just runs along forgetting all the skills and potions he keeps but I'm sure he'll remember next book *facepalm*. Enough with the cliffhangers...I'm sick of having to wait years for a book to come out just because an editor said to cut it off there. Now I get to spend however long it takes with a cloud over my head anytime I think of these characters. Seriously...I'm sick of Drow machinations that are so predictable from people who are supposed to be chaotic.

One of the most muddled fragmented disjointed nonsensical books ever written. A real letdown. Also a terrible ending. Definitely recommend skipping this one (note: Drizzt is not the main character in this book; he turns up briefly in 3 chapters). Victor's narration was superb, as usual.