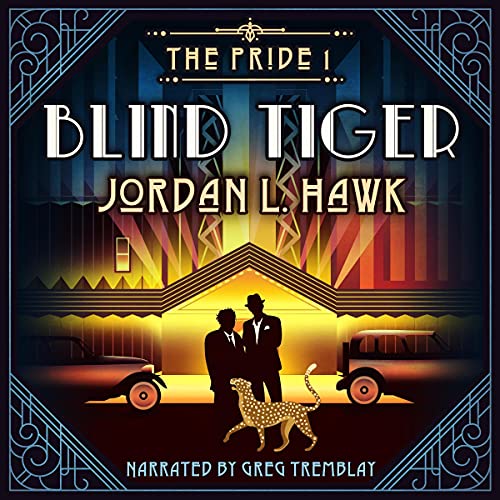 1924, Chicago. Prohibition is in full swing and gang bosses rule the city with might - and magic.

When Sam Cunningham flees his small-town life to try his luck in the big city of Chicago, he quickly finds himself in over his head in a world of gangs, glitz, and glamour. Fortunately, he has his cousin Eldon to teach him the trade of hex-making.

Everything changes the night Sam visits The Pride speakeasy and meets grumpy cheetah-shifter Alistair Gatti. After losing his first witch to the horrors of the World War, Alistair isn’t interested in any new entanglements, romantic or magical. Especially when said entanglement comes in the form of kind, innocent Sam.

When Eldon is brutally murdered, Sam becomes drawn into the dark underworld of the Chicago gangs. Sam must find the missing hex Eldon created for one of the crime bosses - before whoever killed Eldon comes back for him.

Together, Alistair and Sam begin the search for the mysterious hex, diving deep into the seedy side of Chicago’s underworld while dodging rival gangs. And as they come to rely on one another, Alistair realizes he’s falling for the one man he can’t afford to love.

The best book so far.

I’m a huge fan of this author and the Hexworld books. This book Ives forward in time to the 1920s and it’s my favorite of the series so far. I loved all the characters especially Sam. I also loved seeing the way that familiars lives have changed as they’ve gained more rights. I really enjoyed listening to this book and I hope there will be more to come.

Greg Tremblay was incredibly good as the narrator. This may be the first book I’ve heard with him but it definitely won’t be the last! And the story was entertaining and well-written. It’s truly one of the best shifter books I’ve ever encountered.

I love this book. I love the whole Hexworld universe!

JLH is an autobuy for me. Always delivers a wonderful story.

Jordan NEVER writes a bad story. EVER. Trembly's voice over and character rendition perfection. Both together, sublime.

I adored this book. I binged through it, both wanting to know how it would turn out, and not wanting it to end.
Sam and Alistair are wonderful together; they balance each other out so well. Each one of them is just shy of being perfect, with each man being just what the other man needs to smooth out his rough bits. Alistair's history is so tragic and Sam's is so deprived; it is hurt/comfort with each providing comfort to the other's hurts.
But it is also very amusing, witty, and sometimes laugh out loud funny. Sam is a breath of fresh air to The Pride's found family, though each member is delightful on their own. A part of me would be happy to have a whole series focused just on Sam and Alistair, if each book does focus on the other characters in turn, I'd be delighted too.
As for the audiobook, Greg Tremblay's narration is perfection.

One WWI vet cheetah familiar (sour puss)
One country bumpkin (Sammy Sam Sam)
Put them together and you get—well, nothing at first 😂😂

Wait a while and you have:
Murder
Threats
A shared bed 😱😍
Talks
Touches
Groans

What I loved:
Big Kitty Family—can I pet you??
Sammy Sam Sam growing in confidence
Sour Puss Alistair coming out of his shell
The mystery
The interaction between everyone—so good!
The setting!!! Chicago, mob bosses, and jazz!
Greg Tremblay KILLED this NARRATION!!

What I didn’t like:
The fact that the next book isn’t out yet 😩

My rec?? An enthusiastic YESSSSSSSS!