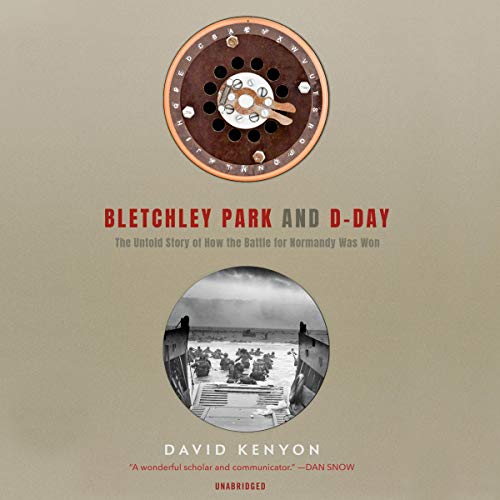 Since the secret of Bletchley Park was revealed in the 1970s, the work of its codebreakers has become one of the most famous stories of the Second World War. But cracking the Nazis' codes was only the start of the process. Thousands of secret intelligence workers were then involved in making crucial information available to the Allied leaders and commanders who desperately needed it.

Using previously classified documents, David Kenyon casts the work of Bletchley Park in a new light, as not just a codebreaking establishment but as a fully developed intelligence agency. He shows how preparations for the war's turning point - the Normandy landings in 1944 - had started at Bletchley years earlier, in 1942, with the careful collation of information extracted from enemy signals traffic. This account reveals the true character of Bletchley's vital contribution to success in Normandy and, ultimately, Allied victory.

Dry read by a terrible narrator

The book might be easier to read than to listen: long lists of tactical units are difficult to follow in an audiobook. The story lacks coherency - the author jumps from one person to the other without properly developing their specific roles. Maybe that was the whole point - to show Bletchley Park as a single protagonista, an organization based on labour of thousands of employees.

But it is the narrator that deserves a separate paragraph. I have almost 200 audiobooks on my virtual shelf, and Greg Patmore's is easily one of the worst performances I heard. A dramatised imitation of voices of British officers apparently was intended to liven up the story. It is just ridiculous, though. One would also expect to have a narrator with basic grasp of German pronunciation when dealing with the book on D-Day - and Mr Patmore definitely has none.

You are warned. Listen at your own risk.

David Kenyon gives a comprehensive overview of the nuts and bolts behind the astonishing level of Intelligence gained, and not just highlighting the code breaking stars. He then shows how the information was used, how timely it was - and occasionally wasn’t - and in what ways it helped Allied Commanders.

Greg Patmore’s narration is intelligent and feeling, and gives great varieties of authentic accents to all the nationalities involved, including widely diverging British and German accents. Rather a tour de force. Bravo!

It’s rare that I don’t finish a book. I’m a WWII buff, but this is really dry stuff. Numbers, acronyms deciphered, when sometimes the acronym is used just a few times, so he might as well just have said it out in full, a lot of dry recitation of information about the work done at Bletchley Park. The narrator did vary his voice and accents to try to make it better to listen to, but I found it not interesting enough. So I cheated and marked this as finished when I was a bit more than halfway through, so I could write a review. It was included with membership, so it was worth a try, but not worth finishing.

This is primarily the story of Allied (mostly British) code (cipher) breaking during WWII, and secondarily what impacts it had on the overall war effort and D-Day in particular. It’s focused on German code breaking but includes info about breaking Japanese and other codes as well. What I came away with was profound respect for not just the talented analysts (code breakers), linguists, intelligence experts, and all others who played a part in this multi-year effort, but also for leadership who had a vision for what was possible and provided the resources. The task was Herculean given the multiplicity of codes/ciphers used by various branches of the German military, let alone individual units, and the constantly changing codes/ciphers. This was not a matter of breaking a single code, but involved solving the riddle to constantly changing codes. Amazing story!

Richly detailed history of WWII’s essential codebreaking, analysis, dissemination, and disinformation effort, with special concentration on the crucial portion leading up to the Normandy invasion. The growth in size, influence, speed, and confidence of GCCS/GCHQ are closely followed, as are Axis developments with Enigma and other codes. Exploitation of documents that had remained classified for 30 or even 60 years brings fresh information to the story and enhances reliability.

The author gives brief biographical details about many of the personalities involved and gives a good view into the arrogance and pettiness routinely displayed by Montgomery.

Unfortunately, the reader insists on reading every quote with a silly, stilted accent, which is annoying and distracting. His imitations of Eisenhower and Patton are particularly insipid, indicating he’s never heard recordings of their actual voices. His Hitler impersonation is pretty poor as well. Guess what — Germans don’t communicate in German-accented English. They speak German, so it doesn’t add authenticity to speak like you’re in a Hogan’s Heroes rerun. For some reason he never attempted a Japanese accent. I suppose this reticence indicates he at least knows some of his own limitations. Thank goodness he never had to try to sound like Churchill.

Many thanks to Audible for making this volume available free of charge.

Story: insipid narration is courages any interest in attending to content, so it is difficult to say how worthy it is.


Skim the first half of the book. Way too many insignificant details are included; some of them redundant.

All the meat is in the second half of the book.

This was very good. I highly recommend it to anyone interested in WWII espionage and code breaking.

A very deep dive into an interesting topic.

This was good very granular but good. If you like World War II history and particularly encryption type stuff this is a good lesson.

This is an excellent book, but you do have to be interested in the subject