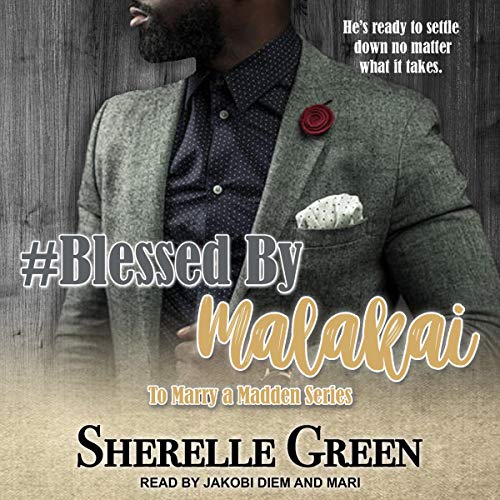 Every man has his weakness. For prominent painter and sculptor Malakai Madden, that weakness has always been women. Now, he's finally ready to settle down and shower one woman with his love. There's just one major problem. Overnight, he's gained thousands of Twitter followers after his obsessive ex decides to leak some private information. To make matters worse, a well-known media source retweets them! Suddenly, every woman wants a piece of Malakai. And when the #BlessedByMalakai hashtag starts trending, he's dodging women left and right, and blocking his crotch like he's secret service securing the president. If he's ever going to get his life back and find his future wife, he needs to solve this problem and he needs to solve it fast!

Image consultant Avery Nightingale can't believe she's landed a meeting with a huge potential client. She knows all about the #BlessedByMalakai hashtag and she's ready to pitch her ideas. However, when she meets the man behind the Twitter legend, she's rendered speechless and Mr. Make You Moan is not impressed. He agrees to hire her on one condition. Avery must promise not to feed into the social media craze, a rule others have failed to follow before her. She agrees. After all, it's just one rule, right?

I originally read this book on Kindle and was excited to see it added to the Audible library. Loved the story and the way it came together. The only complaint I have regarding this book is that it could have been longer. The narration was great, Jakobi Diem is awesome!

The book was great but predictable. It reminded me of the McClain Brothers series. Successful black men and driven, go Getter women lead together by fate. nothing different from the normal theme to these type of books.

The narrator's voices were great and the reading was good. The implications of Maliki being a Sex machine didn't resonate at all throughout the story. Should have had more sex parts if that's the case. I'm interested in the brother Crayson and the brother who is in the military.

Love Story and Comedy in One

Some parts of this book had me rolling over with laughter, laughing so hard it brought tears to me eyes. Excellent story line; love a good plot. I love to listen to Jakobi Diem narrate books; such a deep sexy voice. I highly recommend this book! Keep them coming Sherelle Green! Keep narrating Jakobi Diem.

Any book Jakobi narrates I'm listening to and this book was really good. Glad I purchased it.

The book was just okay for me, I think the narrators did a good job with the materials provided.

Love the book , very short. Love that both had chemistry threw the entire book. He was not ashame to Express it. Narrator Jakobi is incredibly.

Love this story of true love and togetherness. The narrators are the best and getting book 2 today.

Two people looking for love but unexpectedly finding one another at the time they needed it.