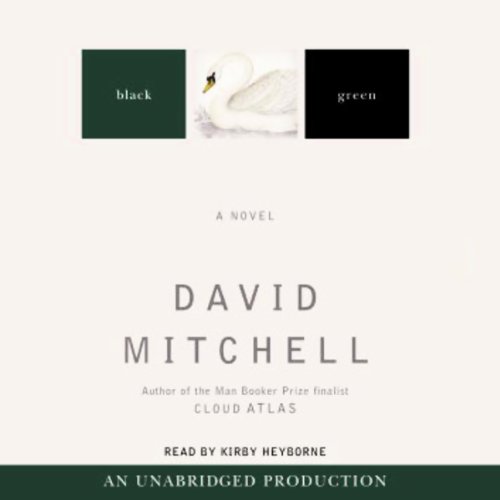 Longlisted for the Man Booker Prize
Selected by Time as One of the Ten Best Books of the Year
A New York Times Notable Book
Named One of the Best Books of the Year by The Washington Post Book World, The Christian Science Monitor, Rocky Mountain News, and Kirkus Reviews
A Los Angeles Times Book Prize Finalist
Winner of the ALA Alex Award
Finalist for the Costa Novel Award

Black Swan Green tracks a single year in what is, for 13-year-old Jason Taylor, the sleepiest village in muddiest Worcestershire in dying Cold War England, 1982. But the 13 chapters, each a short story in its own right, create an exquisitely observed world that is anything but sleepy. A world of Kissinger-esque realpolitik enacted in boys' games on a frozen lake; of "nightcreeping" through the summer backyards of strangers; of the tabloid-fueled thrills of the Falklands War and its human toll; of the cruel, luscious Dawn Madden and her power-hungry boyfriend, Ross Wilcox; of a certain Madame Eva van Outryve de Crommelynck, an elderly bohemian emigré who is both more and less than she appears; of Jason's search to replace his dead grandfather's irreplaceable smashed watch before the crime is discovered; of first cigarettes, first kisses, first Duran Duran LPs, and first deaths; of Margaret Thatcher's recession; of Gypsies camping in the woods and the hysteria they inspire; and, even closer to home, of a slow-motion divorce in four seasons.

Pointed, funny, profound, left-field, elegiac, and painted with the stuff of life, Black Swan Green is David Mitchell's subtlest and most effective achievement to date.

“[David Mitchell has created] one of the most endearing, smart, and funny young narrators ever to rise up from the pages of a novel.... The always fresh and brilliant writing will carry readers back to their own childhoods.... This enchanting novel makes us remember exactly what it was like.” (The Boston Globe)

“[David Mitchell is a] prodigiously daring and imaginative young writer.... As in the works of Thomas Pynchon and Herman Melville, one feels the roof of the narrative lifted off and oneself in thrall.” (Time)

"Great Britain's Catcher in the Rye, and another triumph for one of the present age's most interesting and accomplished novelists." ( Kirkus Reviews)
"Gorgeous....Captures the sheer pleasure of being a boy and brings to mind adventures shared by Huck and Tom." ( Publishers Weekly)
"He reproduces Jason's inner life with such astonishing verisimilitude that readers will find themselves haunted by him long after turning the last page." ( Booklist)

Five stars to David Mitchell's unrelentingly real portrayal of one boy's 13th year. Jason Taylor is disturbed, eloquent, sweet, bawdy (in a 13 year old kind of way), unintuitive and unable to be anyone but himself. That last part is the trouble: no one accepts a 13-year-old who is true to himself, so he gets beat up on a regular basis. He has a rough time of it--an unrelenting stammer, a highly developed intellect which does not usually work in his favor, and a vicious internal life--he names his alter egos the Unborn Twin, Hangman and Maggot. But his talent for language (I know, ironic) and the picaresque episodes with unexpected allies put him in the driver's seat for the bildungsroman which is 8th grade. He emerges victorious, to take the challenges of 9th grade on--whether he wants to or not.

I absolutly loved this book and this author. I also have recently listen to Cloud Atlas. I love the voice of the character,13 year old Jason Taylor. He is a middle tier cool kid. This book is a funny, sensative and often heartbreaking look at how difficult it is to be a 13 year old boy and navigate your place in the food chain of boys in school, the mysterious draw of girls, world politics and family problems. The narrator is brillant. I couldn't stop listening because of his magical voice. He effortlessly breaths life into all of the characters in the book. I can't wait to read/listen to more by this author and I look to hearing more from this narrator.

I can't say enough good things about this book.

Having grown up in Malvern ( pronounced Moll Vern ) I loved Mitchell's reference to places I know and I found the story compelling, but the narrator's English accent was so painful that I couldn't get through this. I hope there's another recording as I'd love to listen.

David Mitchell is a writer I enjoy a lot, so I expected to like this. It exceeded my expectations and I not only loved it, I've already purchased it for several other people in my life.

Besides the magnificent writing, the narration is absolutely perfect! I feel like this is a book I would have enjoyed in written or audio form. That said, I'm glad I listened to it because the narrator bought the book to life for me in a way that I'm not sure I would have experienced reading it. I highly recommend it to everyone.

The joys of teen misery

Top-notch, versatile narration of a lyrical coming-of-age story. Both Mitchell and Heyborne nail the voice of the awkward, angst-ridden boy who struggles with both inner and outer demons--a plague of stuttering, harrassment by village bullies and crazy old ladies, the mysteries of girls, a family that disintegrates even while he finds his strengths. British teenspeak and early 80s pop-music and political references add to the delight.

My favorite of his books

Would you listen to Black Swan Green again? Why?

The narrator was compelling. I doubt if I'll listen again because I have many, many waiting for my eaers.

What other book might you compare Black Swan Green to and why?

its a tribute to David Mitchell's writing that I managed to listen to this book to the end. The story takes place in England and the characters are all English. so why choose a narrator that sounds like a Canadian who went on holiday to Manchester and took elecution lessons from the Queen - sorry Kirby I'm sure you're a nice bloke but the reading was dismal!!

Slow start but then very engrossing

I really liked this book - my first by David Mitchell. The narration was good in parts but the pronunciation of place names and even just ordinary words was off putting. A slight glitch in an otherwise good experience. I'm off to start my next DM book now....

A boy's coming of age doesn't get much better

What made the experience of listening to Black Swan Green the most enjoyable?

Everything. The reader seemed to BE the characters. I wish the book was longer.

The lad, of course! I did also like his sister, too. Even Hugo with his grisly dark side was just right for this perfect book.

I think the reader must have loved this book as much as I did and it came through. The pain, the little joys, the everyday-ness of being a boy in Yorkshire at age 13. It was moving and entertaining.

If you could take any character from Black Swan Green out to dinner, who would it be and why?

the lad of course. I would want to know how his poetry was developing and if he liked his new home in London.

David Mitchell is a perfect novelist, storyteller and poet. His command of prose takes my breath away. Literally.

If the lead character of a novel is a 13 year old boy please audible, pretty please hire an English actor.

The pronunciation of vowel sounds by this narrator are incredibly jarring. Pretty clearly an American doing an English accent and not all that badly EXCEPT for all of his vowel sounds!
Not being English also leads to the narrator woefully mispronouncing place names and butchering regional accents that are scattered throughout the book.

The narrators rhythm and acting skills are really quite good but he shouldn't be reading English characters without some guidance. Easier just to hire a Brit in the future, PLEASE!