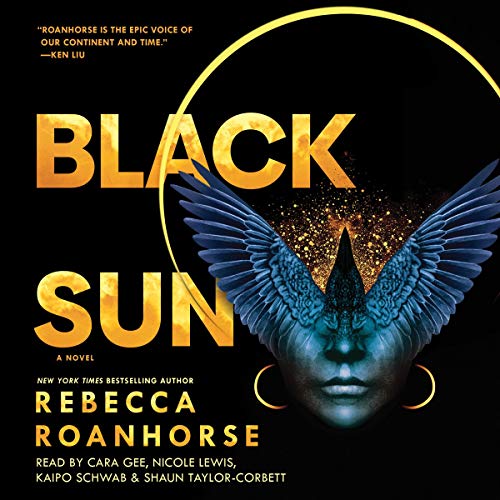 From the New York Times best-selling author of Star Wars: Resistance Reborn comes the “engrossing and vibrant” (Tochi Onyebuchi, author of Riot Baby) first book in the Between Earth and Sky trilogy inspired by the civilizations of the Pre-Columbian Americas and woven into a tale of celestial prophecies, political intrigue, and forbidden magic.

In the holy city of Tova, the winter solstice is usually a time for celebration and renewal, but this year it coincides with a solar eclipse, a rare celestial even proscribed by the Sun Priest as an unbalancing of the world.

Meanwhile, a ship launches from a distant city bound for Tova and set to arrive on the solstice. The captain of the ship, Xiala, is a disgraced Teek whose song can calm the waters around her as easily as it can warp a man’s mind. Her ship carries one passenger. Described as harmless, the passenger, Serapio is a young man, blind, scarred, and cloaked in destiny. As Xiala well knows, when a man is described as harmless, he usually ends up being a villain.

Crafted with unforgettable characters, Rebecca Roanhorse has created a “brilliant world that shows the full panoply of human grace and depravity” (Ken Liu, award-winning author of The Grace of Kings). This epic adventure explores the decadence of power amidst the weight of history and the struggle of individuals swimming against the confines of society and their broken pasts in this “absolutely tremendous” (S.A. Chakraborty, nationally best-selling author of The City of Brass) and most original series debut of the decade.

Roanhorse's Trail of Lightning and Storm of Locusts are two of my favorite novels. Black Sun displays the same imaginative facility with fascinating characters, intriguing world-building, and compelling plot--but unfortunately it ends as a definite precursor to Book Two, without any satisfying sense of closure. I think it should have been part of a longer work. Honestly I am exasperated by the marketing of "series" dictating the abrupt ending of so many otherwise interesting novels. I almost feel like returning Black Sun for the way I feel cheated out of the full story arc. Whether part of a series or not, books need to stand alone on their own intrinsic merits.

Great story but lacks any kind of an ending

I really enjoyed this story, and the narration was well done. I regretfully feel the need to dock a star on the story. There is no satisfying ending to this story. Every single storyline we’ve been following through the entire book is left unresolved. I’m okay with a book in a series leaving a cliff hanger, leaving a few things unresolved, but leaving the entire book with no kind of conclusion felt very misleading and dissatisfying. I’m wary of the next book, but I’ll probably listen to it. If that has the same lack of ending, I won’t go further in the series. I don’t enjoy being abandoned in the middle of a story.

Built Us Up Just to Let Us Down

This story had the makings of an epic quest. Roanhorse creates amazing characters with tons of depth and back stories that catch fire to the readers interest, slowly illuminating the plot within the plot. Each character moves through their own personal story arch but soon you start to sense their connection and you are certain that a "convergence" is approaching, the build up is so good that I was absolutely heartbroken when one by one each characters story just stops. Now I'm all for unhappy endings and or cliffhangers that signal the coming of a sequel but this story clearly just ends with no ENDING. The reader is left with so many untied knots that you wonder what was the purpose of all that string in the first place? So while this might have had the makings of an epic quest in the end we are only left with questions...even death is uncertain.

Beautiful world building. A fully fleshed out cast of characters. And a full sweeping adventure with an end that leaves each of our main POV characters’ fates up in the air (literally in one case!) So, if you hate cliffhangers, buy this book and save it to read until the next one drops! But honestly, while Roanhorse’s prose are accessible and make for an easy read, she manages to pack so much into this story that, having time to read it now and then reread it at least once before the next one is available, will be more of an advantage than a burden. At least for me!

Rebecca Roanhorse's Black Sun is an epic fantasy tale based on pre-Columbian themes. An extremely rare astronomical event is the backdrop for a return to ascendency of the Carrion Crow clan resulting from a putsch many years earlier. Their usurpers, the Watchers are astronomers and have been calling the shots ever since. A young man, mutilated by his mother as a child, journeys to Tova, the main city to exert his godhood status and restore the Crow position in the community. Along the way there are multiple agendas, back-stabbings, and double crosses to provide lots of action.

Roanhorse relates the tale from four distinct perspectives. Each character has an extensive backstory revealed through multiple flashbacks. The political structure is complex adding a sense of realism to what is otherwise a fantasy story and meshes nicely with long standing prophecies and religious rituals. While the tale ends with a modicum of closure, events do not play out as intended, setting up sufficient fodder for an anticipated sequel.

The choice of four different narrators for the four perspectives was wise and adds considerably to the listening experience. Each narration is well done.

Familiar Characters in a Fresh Setting

A strange kid/man with a destiny.
A bawdy, brash, bi-sexual sailor woman.
The low-born girl who was helped into high society by an eccentric elder patron.
The man trying to keep out of the religious zealots of his people who want him to join.

These are not new archetypes, but they are archetypes that I generally like. The novelty, for a fan of the fantasy genre, is that the fantasy tropes you might be used to of Ale and tall-masted ships and Dragons and demons, have been replaced by lore and legends and myths of The Americas before being colonized. The sour cactus alcohol, the penchant for chocolate with hot peppers, the crossing of a sea in a large canoe, and the story cruxing around a sun god and a crow god and other elements people familiar with the folklore the author is pulling from: in another work written from a Euro-centric fantasy, these would be elements heavily exoticized with the main characters commenting "My, such strange food! I like it, but I think I'd prefer an Ale from home and bite of cheese!" So I really liked the venture into a different flavor of fantasy.

Unfortunately, the plot, aside from some stuff near the climax, I found kinda predictable. Also there were some romantic elements that were kinda like "Okay, this is here for the shippers, but golly we're spending a lot of time on it!" I never had a problem with the plot, but if it had been a Euro-centric tale, it would not have been not different enough from anything else to get above 3-stars. Much like my English Professor, you get a C for doing the minimum requirement. I give this a B for novelty in setting and a few surprises at the end, but there were a few too many awkward romance bits and predictable high society drama. If there's a sequel which can really build on this, then I might revisit my opinion, but if the next one is more of the same counting on its novel folklore to maintain interest, then I'm only giving the Novelty star out on the first round.

Performance: having different voices for each character's perspective was nice, and everyone did a good job. Nothing really stood out as above and beyond though.

This story had a ton of potential however poor writing, forced plot points and overly crisscrossed timeline makes this a painful read.

So, when does book 2 come out? Cuz I'm going to need that soon. What an amazing ride! Fascinating world, amazing characters. I'm not generally one for court intrigue sorts of stories . . .but the plotting and machinations came with huge emotional stakes and I was riveted.

I was already a Roanhorse fan from her Sixth World series, but this is a whole different level of awesome. So, hurry up, Ms. Roanhorse and get that next book out here. I'll be here waiting :-)

So many amazing characters with lush backgrounds and cool magic systems. I'm ready for book 2!!!

So worth the read

I wasn’t sure when I first started listening, but the more I got into it the more I enjoyed it to the point where I couldn’t put it down. I haven’t been this in love with a book in a long while. The voice acting is all beautiful done and the story is so different and unexpected. It is told from different perspectives and it gets to the point where you love hearing from everyone and it’s hard to tell who to root for. I’d suggest this to anyone. Put it on your reading list.