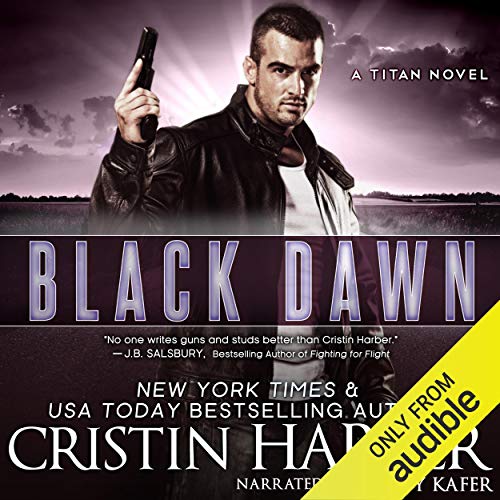 Parker Black wants the one woman he shouldn't have - his buddy's girl. She's sweet and smart, but clueless about how deep Parker lives in Titan's virtual world. Everything is controlled. Chaos is mastered with data and risk analysis. That is the way he understands his world, how he plays his role to keep Titan teams alive.

But he's wrong. About everything.

Lexi Dare lives two lives. She's an unhappy fiancée stuck in a spiraling relationship, unsure how she ended up with a ring on her finger and an abuser in her bed. But she's also elusive. Elite. A master hacker playing deadly stakes.

When the lines blur and the truth comes out, Lexi's only shot at survival is the trust of her rival - her equal - before it's too late.

I can’t even believe how ridiculous this story is! It’s an insult and mockery to people who are really in bad situations. The thing that keeps her there, and forces her to return is a DOG?!?! Really?! Not a child where there is legal ramifications or limitations, but a DOG? Pick it up, walk out the door, never look back! Done! I really can’t get my mind to accept this is a real problem that she can’t figure out.... just an insult to everyone who reads this story! I think I am done with this series.

This is one of my favorite Titan books. I love Lexie AKA Silver. And Parker, what can I say, he is hot, smart, hot, secretive , deadly, and did I mention hot. Cyber genius, silver has a whole other world she lives in besides the one with her abusive boyfriend. She finally escapes from him. Has she she moved into worse danger.

Terrorists, the US gov. What else is in store?

I hope you enjoy this as much as I did .

This Titan book was just okay for me. It starts with Lexie getting together with Matt, a controlling douche. Through physical and mental abuse, Lexie stays with him for reasons that only make sense if you’ve known people in real life who’ve lived through domestic violence. Even strong women have a hard time leaving. Lexie is super tech smart, a hacker with mad skills, but her foster kid background and love of her portly Pug Bacon complicate what should be an easy decision to leave Matt.

I would have preferred to start about two hours in, when Lexie reaches out to Titan tech man Parker Black for help severing from the douche.

The tech thriller storyline was nice... and the naughty parts were nice too. However, given the DV starting point, their romance didn’t have Titan’s usual testosterone filled, alpha male Amore N Action goodness found in the earliest books. Okay as part of a free Audible borrow, but ultimately would not spend a credit on this one.

Bumpy beginning for this heroine as she tries to extricate herself from a violent relationship. But, soon enough all’s forgotten including the dog. By the end , the story comes full circle. Exciting story

this book was great from start to finish! one of the best ones in the series but all are good!

Lexi and Parker are both hackers and know more about each other than they realize when they cross paths outside of the hacker life. When Lexi's brilliant programming skills are put to auction, Parker is tasked with keeping her and it safe, but doing so proves to be quite difficult when the dangers draw too. lose for comfort.
I am thoroughly enjoying this series and Jeffrey Kafer's narratives.

Favorite book of the series so far!

Not an easy listen at first

This book will make you angry, make you sad, make you laugh. I really enjoyed this one because I'm a techie and wanted more of a peek into the character of Parker.

Parker story was so original and page turning I could hardly sleep because I wanted to see it to the end!! Great plot, loved how Silver was exactly who Parker could identify with. Was always wondering who he would meet as his. Wonderful!!

Tough beginning as smart Lexi finally extracts herself from an abusive relationship after it escalates from mental abuse to occasional physical abuse to finally constant mental and physical abuse that includes her pet. Had to wonder if the dog hadn’t been kicked and thrown how much longer it would have taken her. She leaves with Parker’s help and bounces back rather quickly and then the fun begins with evading terrorists and playing with Parker. They make a very cute couple which makes the Matt connection seem unreal. Kafer’s narration is the same as the others in the series which doesn’t quite fit the normally cool but now confused Parker. It really doesn’t work for Lexi. Fortunately the story moves at a fast enough pace that the narration is not overly distracting or detrimental.