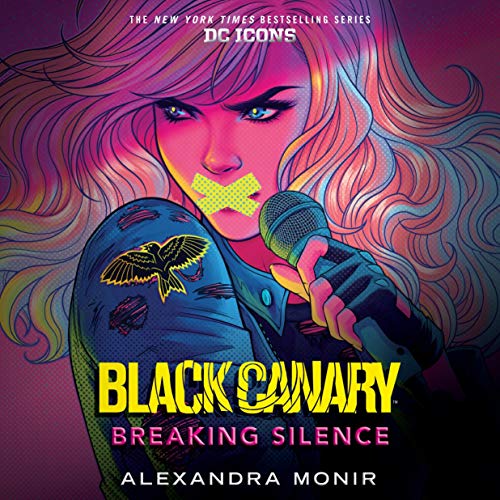 DC Icons continues with the first-ever YA origin story of superhero Black Canary, from the internationally best-selling author Alexandra Monir. In this thrilling novel, Dinah Lance's voice is her weapon. And in a near-future world where women have no rights, she won't hesitate to use everything she has - including her song - to fight back.

Dinah Lance was eight years old when she overheard the impossible: the sound of a girl singing. It was something she was never meant to hear - not in her lifetime and not in Gotham City, taken over by the vicious, patriarchal Court of Owls. The sinister organization rules Gotham City as a dictatorship and has stripped women of everything - their right to work, to make music, to learn, to be free.

Now 17, Dinah can't forget that haunting sound, and she's beginning to discover that her own voice is just as powerful. But singing is forbidden - a one-way route to a certain death sentence. Fighting to balance her father's desire to keep her safe, a blossoming romance with mysterious new student Oliver Queen, and her own need to help other women and girls rise up, Dinah wonders if her song will finally be heard. And will her voice be powerful enough to destroy the Court of Owls once and for all?

Glamour.com, “16 Books for Everyone on Your List, According to Book Influencers"

PopSugar, “Books Everyone Will Be Talking About in December”

Brit + Co, “13 Page Turners for the Book Lovers on Your List”

"Monir deftly balances familiarity for DC fans and accessibility for new readers, blending superhero origin with coming-of-age tale in an excellent book for fans of comics and dystopian fiction, as well as reluctant readers."—School Library Journal

"Dinah is a powerful protagonist, vibrating with a youthful rage and energy familiar to readers itching for revolution of any kind. Monir never shies away from her tale’s unfortunately pertinent sociopolitical implications, putting a refreshing spin on the feminist dystopia. ... Sure to resonate in today’s volatile climate."—Kirkus Reviews

Exactly the kind of book we need right now

Black Canary is hands-down my favorite DC character. I was a little skeptical about a YA novel set in an alternate Gotham. I heard the author speak about the novel and her personal connection on a YouTube interview, though, and knew I had to pick this up.

I am SO glad I did. In today’s political climate, it’s so easy for anyone who isn’t a cisgender straight white male to have their voices silenced. Reading and listening to this story really transported me to a place where this rhetoric has his a crescendo - almost as a cautionary tale for today.

If you are a young woman or part of any marginalized group, I think you’ll get a lot out of the message of this book.

terrible backstory for a great character

this is actually one of very few times I have posted a review. I was so utterly disappointed in this book. the story while interesting destroyed a great character. I will be returning this book

Black Canary is one of my favorite comicbook characters, to bad this book is not really about Black Canary. I just gave up it is only the second book ever i refunded on audible it´s that bad imo.

All of these DC books has been great. I wish they wrote them more quickly.

When it comes to DC material, especially involving the Batman world, I will most likely give a shot. This is part of the reason I checked this one out, also I am a fan of Black Canary. At first it feels very YA and kinda teen drama in dystopian era Gotham, but once you really get into the story it is really good. Of course, being a fan of the DC Universe, I had to get pass certain inaccuracies like Batman dying of old age before second Black Canary is born when she and Oliver are suppose to be the same age as Batman. Still, how Dinah discovers herself as a hero and how her relationship with Oliver develops is pretty well done. Also, the realistic idea of women having pretty much no rights and power due to a shadow organization like the Court of Owls is intriguing and engaging. All and all, if you are a fan of both the character and the surrounding universe, or of dystopian sci-fi stuff, it is definitely worth checking out.

I was looking forward to this because I’m a sucker for superhero stories. Unfortunately, this one was a little boring and predictable.

This back story on the black canary has been one of my favorites in this series.

I love that she learned she has had the power all along.

My least favorite part of this book is the violence… but it is a DC Legend, so I knew to expect it.

My favorite part is canary working with the green arrow…

I really enjoyed this audio book. The narrator is stellar, and I like that they introduced less known DC characters and had empowering female leads that with a good storyline.

As a superhero tv and movie fan, I instantly loved this book with all the twists and turns. A great book about female empowerment in the face of a toxic patriarchy. Dinah Laurel Lance is a likable protagonist with a lot of heart and potential. Thrilling story for sure!

I really enjoyed this book. Wish there were a sequel to this. If you like DC comics and Black Canary and Green Arrow you will absolutely like it.