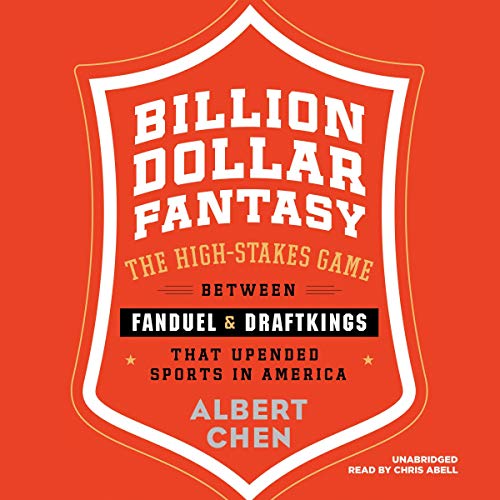 The story of the rise of daily fantasy sports, and the brilliant entrepreneurs disrupting the way we consume sports

The inside story of the rise, fall, and rise of FanDuel and DraftKings - two companies that began as obscure startups and, seemingly overnight, became billion dollar companies, and just as quickly found themselves the target of the FBI and Department of Justice and the center of a national scandal.

Veteran sportswriter Albert Chen draws on candid, unprecedented interviews with every key player in tech, sports, gambling, and the fantasy leagues to create a breakneck narrative around a group of entrepreneurs, players, and gamblers. Billion Dollar Fantasy recounts the origins of modern gambling and fantasy sports in America, and follows the unlikely rise of the fantasy sports world through the lens of the two startups at the center of the story.

For fans of The Big Short,The Facebook Effect, or Bringing Down the House, this book tells the tale of a culture of risk, hubris, greed, redemption, and a group of larger-than-life characters trying to make sense of the complex new world they've created.

Daily Fantasy Sports took the sports world by storm and accelerated the move to legalizing sports gambling in the US. This tells that story through the lens of important individuals during that rise. I enjoyed this very much. I would have given 5 stars if they had not included the DFS pro. I understand why he was included, but his story was a distraction, instead of a supporting narrative.

incredible untold story behind the scenes

Albert Chen does an excellent job detailing and documenting the different aspects and people behind the modern industry of daily fantasy sports along with humanizing a cold, volatile industry