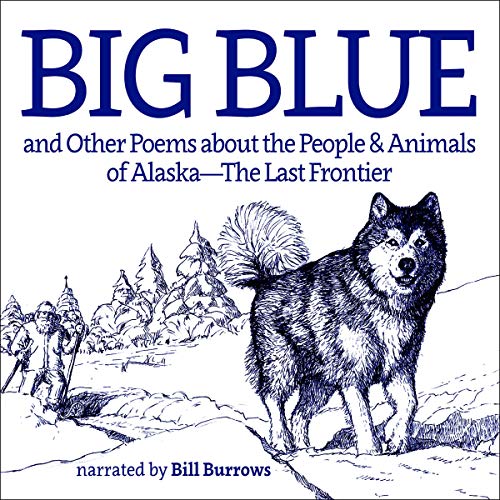 Big Blue: And Other Poems About the People and Animals of Alaska

Anyone who has spent any time in the North Country, either as a visitor or a resident, has probably heard the name Robert Service. This audiobook is more or less an homage to this British Canadian poet and writer, often referred to as “The Bard of the Yukon”. His poignant and frequently humorous poems were mostly written during the great Yukon Gold Rush. But they are still performed to this day at tourist attractions all over Alaska and Northwest Canada. His most famous works (and the ones you will hear recited almost exclusively) are “The Spell of the Yukon”, “The Shooting of Dan McGrew”, and, my favorite, “The Cremation of Sam McGee”.

I discovered my talent for writing poetry when I got married and began writing poems to my wife for her birthday, Valentine's Day, and 40 anniversaries. Most of them were fairly short. But then recently, on a whim, I attempted what I call an “epic” story poem. When I started writing, I immediately thought of Robert Service’s style - especially the rhyming scheme he often employs in which he puts a double rhyme within the first and third lines of each stanza. This style is colorfully on display in the opening of “McGee”:

"There are strange things done ‘neath the Midnight Sun by the men who moil for gold; The Arctic trails have their secret tails that will make your blood run cold.

"The Northern Lights have seen queer sights, but the queerest they ever did see; was the night on the ‘marg of Lake LeBarge when I cremated Sam McGee!"

The result of the first foray into long-form poetry was “More Than I Could Bear” - a tale of an unlikely relationship formed between a man and an Alaskan brown bear. The next thing I knew, I had written enough poems for a book!

I hope you enjoy my poems - at least enough that I will be encouraged to do more!

Ce que les auditeurs disent de Big Blue: And Other Poems About the People and Animals of Alaska