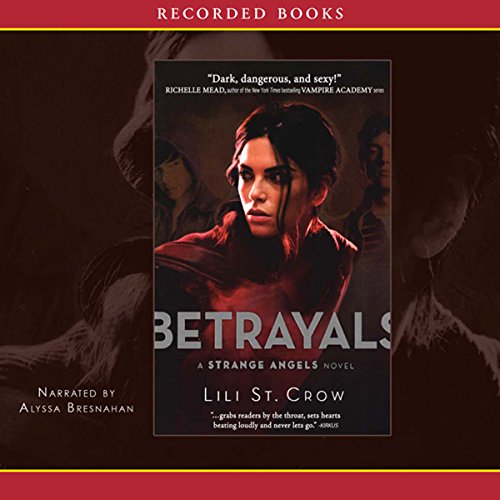 Lili St. Crow staked her place among writers of dark fantasy with the release of Strange Angels, the first book featuring night hunter Dru Anderson. Here, teen Dru returns, a little wiser but still beset by supernatural terrors that would have most girls her age running for cover. What else would you expect for someone with nonhuman blood coursing through her veins?

Now Dru is stuck at a secret New England School for other teens like her, and there’s a big problem: she’s the only girl in the place. A school full of cute boys wouldn’t be so bad, but Dru’s killer instinct says that one of them wants her dead. And with all eyes on her, discovering a traitor within the Order could mean a lot more than social suicide.

This was a great book. The narratotr was awful. Too old - she didn't sound like a teen girl at all. She took forever spitting out a fun, witty comment a character would make which would ruin it completely. Was not able to keep up with banter and the dialogue between characters just became painful to listen to. She has obviously not spent time around teenagers. Just wrong, wrong, wrong.

I ALMOST GAVE THIS

I ALMOST GAVE THIS AMAZING story 3 stars CAUSE THE NARRATION IS AWFUL!!!!!! I had to keep rewinding it cause SHE'S MONOTONE!!! THE STORY IS REALLY GOOD BUT....... EVEN THE BEST STORIES CAN BE RUINED BY THE WRONG NARRATOR!!!

Strange Angels mauled yet again by the narrator

The only thing more shocking than a horrible narrator, is realizing how many books they've narrated. I'm serious confused by the way Alyssa Bresnahan reads... pardon the reference but it's like she's constipated. I can't get passed this because the world Lili St. Crow has built deserves a better read.

I think this is my first review on audible recommending that you buy the paper version instead.

I rated this book three stars... one taken for narration (I should have taken two but the story itself deserves three) and one taken for language in a YA novel. I mentioned this in the review of the first book, but if you're writing YA, you have to realize not all parents are okay with profanity being slung left and right. I dont have kids, and I don't mind language, but I rate YA based on what a mom might read before buying it for their teen.

I'm liking the book better now that things are finally getting going. Dru's a strange bird... she's being hunted by vamps because she'd a half vamp girl (which is rare in this world) and she drinks and cusses like a sailor. She's caught in a typical triangle between a were and another half vamp (or 1/16) and had a goal of staying alive until she matures... apparently her blood is yummy now and wont be once she's changed.

Listening to this book is like traveling a gorgeous landscape on a bumpy bus with a partially working airconditioner... sometimes its a breeze, sometimes you're in agony... but at least the view is great.