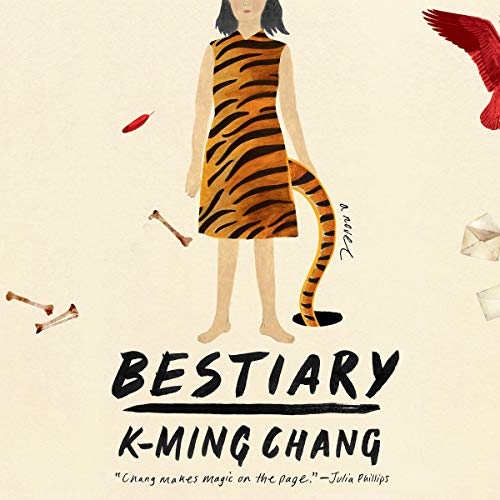 Three generations of Taiwanese American women are haunted by the myths of their homeland in this spellbinding, visceral debut about one family’s queer desires, violent impulses, and buried secrets.

Long-listed for the Center for Fiction First Novel Prize

Named One of the Best Books of the Year by O: The Oprah Magazine • NPR • The New York Public Library • Kirkus Reviews

“Epic and intimate at once, Bestiary brings myth to visceral life. K-Ming Chang's talent exposes what is hidden inside us. She makes magic on the page.” (Julia Philips, author of Disappearing Earth)

One evening, Mother tells Daughter a story about a tiger spirit who lived in a woman’s body. She was called Hu Gu Po, and she hungered to eat children, especially their toes. Soon afterward, Daughter awakes with a tiger tail. And more mysterious events follow: Holes in the backyard spit up letters penned by her grandmother; a visiting aunt arrives with snakes in her belly; a brother tests the possibility of flight.

All the while, Daughter is falling for Ben, a neighborhood girl with strange powers of her own. As the two young lovers translate the grandmother’s letters, Daughter begins to understand that each woman in her family embodies a myth - and that she will have to bring her family’s secrets to light in order to change their destiny.

With a poetic voice of crackling electricity, K-Ming Chang is an explosive young writer who combines the wit and fabulism of Helen Oyeyemi with the subversive storytelling of Maxine Hong Kingston.

Tracing one family’s history from Taiwan to America, from Arkansas to California, Bestiary is a novel of migration, queer lineages, and girlhood.

"[A] vivid, fabulist debut...the prose is full of imagery. Chang's wild story of a family’s tenuous grasp on belonging in the U.S. stands out with a deep commitment to exploring discomfort with the body and its transformations." (Publishers Weekly)

One of: Electric Lit's "56 Books by Women and Nonbinary Writers of Color to Read in 2020"

"To read K-Ming Chang is to see the world in fresh, surreal technicolor. Hers is a dizzyingly imaginative, sharp-witted voice queering migration, adolescence, and questions of family and belonging in totally new and unexpected ways. Both wild and lyrical, visionary and touching. Read her!" (Sharlene Teo, author of Ponti)