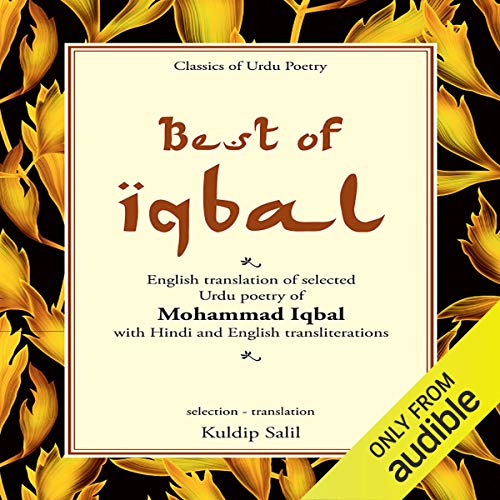 Mohammad Iqbal was a poet and political philosopher who is known both for his poetry and his ideas that were influential in the creation of Pakistan. Mohammad Iqbal was born in Sialkot, Punjab, in 1877 and graduated from Government College, Lahore, with a master's degree in philosophy. He then taught there until 1905.

During this period his poetry expressed an ardent nationalism, but a marked change came over his views between 1905 and 1908, when he was studying for his doctorate at Cambridge University, England, as he was deeply influenced by the philosophies of Nietzsche and Bergson and became extremely critical of Western civilization, which he regarded as decadent. He turned to Islam for inspiration and rejected nationalism as a disease of the West. He argued that Muslims must find their destiny through a pan-Islamic movement that ignored national boundaries.

These ideas found expression in his long poems Asrar-e-Khudi (The Secrets of the Self) in 1915 and Rumuz-e-Bekhudi (The Mysteries of Selflessness) in 1918, which he wrote in Persian and not Urdu. In his last years Iqbal returned to Urdu as his poetic medium. He died in Lahore on April 21, 1938. This book presents a collection of some of the best poems and ghazals of Iqbal, along with their English translation as well as transliteration so that the listeners can enjoy the original flavor of Urdu poetry.