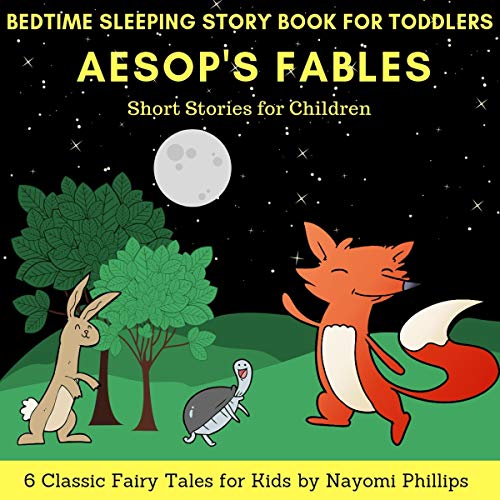 Aesop's Fables are stories based on allegories and caricatures featuring mostly animals. These stories got the collective name Aesop’s Fables from the person who collected the stories. Aesop, popularly believed to have been a Phrygian slave, collected his fables sometime around the sixth century BC. Whatever his real story may be, the fables he collected feature valuable lessons.

This audiobook contains six famous fables by Aesop as given below:

Containing retelling of six of Aesop’s adopted fables, this audiobook will be the ideal gift for your kids.

We hope you enjoyed the audiobook preview. Get the full audiobook now!

I’m sure this will capture every kid’s attention. It can easily and naturally teach them the skills and the attitudes like honesty, responsibility, cooperation, and others that they need in order to survive and enjoy life.

Short but inspiring and easy to remember. If you're looking for effective ways to instill moral lessons to a child, this collection of aesop's fables will help you out!

I thought fables are old-fashioned and demanding. But my 5 year old insisted on checking this out. The short stories stayed with her and I'm beginning to appreciate this. I'm glad i gave this a chance.

I honestly couldn’t listen to this with my 4yo. Worst narrator I’ve heard. I don’t recommend this book

Aesop’s fables are not just bedtime stories for kids. Each of the fables has its own lessons for everyone. I played this loud, so our whole family could listen. Not only our kids, everyone enjoyed it.

Before I let my children listen to this, i tried it first and was impressed. Its a nice collection that children will be able to relate with because of the animal characters. What better way to begin our new year than to listen to moral lessons that will guide us starting our 2019 right.

So fascinating! A book for children to love.

These are classic fairy tales that every kid should explore. These stories don’t just fascinate anyone, it illustrates a particular moral and teaches kids lessons they’ll remember easily.

Entertaining bedtime stories here that got my child sleeping. He usually has trouble sleeping early, so this audio book did a huge favor for me.