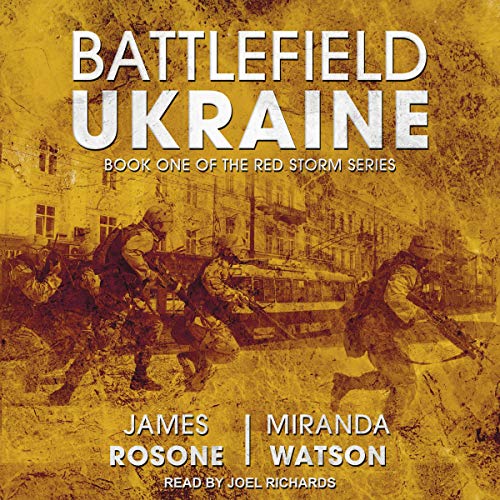 Why do wars really start?

In Battlefield Ukraine, all the usual suspects are hard at work: battles over resources, money, and miscommunication. This predictive novel explores a potential war between NATO and Russia over the fate of the separatist regions in eastern Ukraine.... You'll hope this realistic scenario doesn't become a self-fulfilling prophecy.

Lines have been drawn in the sand, but how firm are they? Will the massive disinformation campaign by the Russians trick the new American administration to do their bidding? Will the new American president back down, or will the world creep one step closer toward global war?

Hey, this is fiction. I get that. But so many of the characters "torn from today's headlines" are absolutely cartoonish. The story is so chock full of Russian talking points ranging from the fascist anti-Russian regime in Ukraine to US election interference it had me wondering if the author was an unwitting dupe or a paid Kremlin employee. The thoughtful and insightful president who constantly outwits the bad guys, the lying media, the intelligence community, his political rivals and is surrounded by incompetent military leadership is the literary equivalent of photoshopping President Trump's head onto the picture of Rocky. If you have no experience with the military and are looking for a young adult political/military novel as a break from watching Russia Television and One America News give this a try. The reader really does a decent job.

It’s obvious the poor maligned “President” in this story is loosely based on the legit crazy person who is now our President. However, this character is portrayed as psychologically “normal” and actually cares about people, so there’s that at least. The story is excellent, and it’s definitely a page turner, with up to date military information which I love. This review brought to you by a military veteran in case anyone is offended. Looking forward to the next book in the series.......maybe in the next book the White House will have changed up.

It reads as if Fancy Bears and the GRU had hired a high school kid to come up with a story. Germany is referred to as 'fascist' consistently, as if that indeed were its official tittle. This is darkly hilarious, when comparing the modern German State to that of today's Puntinist Russia, a true one-party State. The first chapter was bad enough. I decided not to waste any more of my time on it. Will seek a refund.

Not well researched. Politically, 'fake news'. Enjoyable enough ; if you like the genre, it'll do.

Overall the story has a good premise. However its the execution and general knowledge of how these battles are conducted that lacks accuracy. its all to convient how the western allies and intelligence fail at the right moment for the Russian government to succeed.

Very interesting, mostly plausible premise. Some of the details were a little Slavaboo biased, but if you dont seriously follow defense news you probably won't notice.

Not bad, not Clancy

I have always gone for speculative military fiction and so this peaked my interest. The story/scenario is pretty great but the character building, dialogue, and prose is often lacking. (Some of this I would place in the narrator. Often felt like someone was reading a newspaper more than an article. I’ll check out the next one but hope the dialogue and character arks get better. Over one of the better WWIII plausibilities.

I didn't even finish the book. no real story just lots of violence. Won't bother with any more in the series

Could have been written by a robot

It’s more of a battle simulation then a plot. The book could use a wider view of the events playing out, More consistency in following characters and better avoiding of cliche’s.