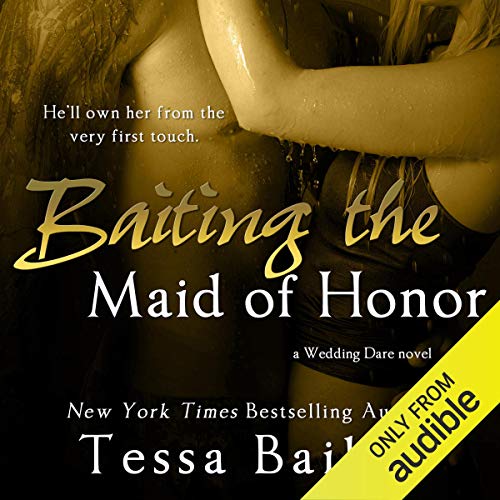 Baiting the Maid of Honor

He'll own her from the very first touch. Julie Piper and Reed Lawson have nothing in common. She's a people-pleasing sorority girl hiding behind her perfect mask. He's a take-no-prisoners SWAT commander who isolates himself from the world. But when they're forced together at their friends' posh destination wedding, one thing is clear - Reed wants Julie more than he wants his next breath. Which is why he's not about to stand by when she's dared to seduce another man.

Julie wants neat, tidy sex, so she could get back to what she does best - making everybody else happy. She never expected to slip into a dark bedroom and have her mind blown by rough, demanding hands, and a sinfully filthy mouth - neither of which belong to the best man.

One night should have been all Reed needed to get the blond temptress out of his system, but when one taste is nowhere near enough, he'll be forced confront the effects of his hellish past. One that may push Julie away forever... just when he realizes he can't live without her.

I wasn't expecting much from a short book in the "Brazen" series, but this was a nice surprise.

Both main characters were fairly well fleshed out and likable, the development of the relationship was reasonable (no exaggerated responses to over the top mistakes; just boy messes up, boy makes good) and did not solely revolve around how well the couple responded to each other sexually. The secondary characters were a little flat, but I suppose that is because each other couple has their own story in the series.

James Cavanaugh (who currently has no other books on Audible) was absolutely perfect for the book. I am not from the South and I cannot say if his slight twang was genuine, but he sounded like Matthew McConaughey's sexy brother and I thoroughly enjoyed his reading. I would be much more tempted to continue the series if he were the narrator in all.

The "Wedding Dare" series describes how each of several couples get together at a friend's wedding, with each book by a different author. This is the third book in the series and where I started (book numbering differs between Amazon, Audible and Goodreads, but order is the same). While this book references the other couples getting together, it is fine as a stand alone book and other than who is interested in who, no secrets are revealed.

If you are interested in the series, do note that Audible neglects to list the fourth book in the series, "Seducing the Bridesmaid," by Katee Roberts, when you click on the series "Wedding Dare," but it is available on Audible.

Reed and Julie sizzle together!

Loved Reed and Julie's story! Reed is the hot, dirty talking, bad boy of the bunch who sets his sights on the blonde southern belle Julie. She's tries to deny her attraction to him but he is hell bent on making her see how good they can be together. It's one hot ride!!!

The narrator decided to use a very ridiculous southern accent for the main character (male) and sadly it made ever line of the characters sound cheesy and stupid. I've enjoyed the previous books in this set, but this one sucked.

What another amazing story based around this group of friends, two people not looking for more than a week escape and find love.

This is a great story. It is part of a great series. My issue is the southern accents and sayings. I am southern born and raised and the accent was near parody of how we really talk. Some of the sayings were too corny to be real. There was much about the narrator I like just not the accent. I am so glad I found this series.

Now who doesn't like a dirty talking tattooed hero? Loved Reed!
Reed, one of the groom’s best-friend, is the mysterious and broody SWAT that doesn’t connect easily with people.
Julie is the maid of honor and the wedding planner. She is a bubbly person that makes everyone else happy. Well, everyone except herself.
They were opposites and nothing was supposed to happen between them. Until it does and everything changes. Reed knows Julie lives in a different reality that him, but he still doesn’t want to let her go.

Laugh out loud funny and HOTT!!!

This book was really funny and I found myself loving the characters. Their hotness was my type of fun!! Enjoy!!