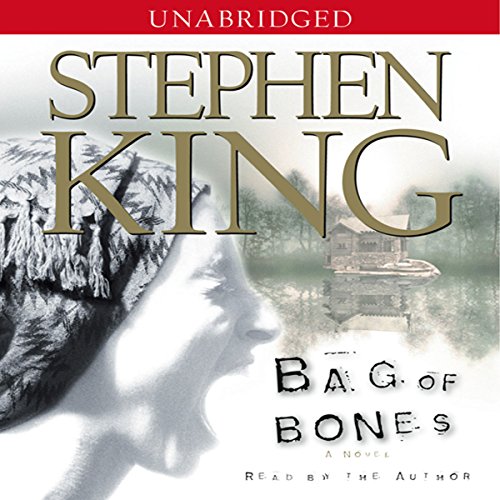 Even four years after the sudden death of his wife, best selling novelist Mike Noonan can't stop grieving, nor can he return to his writing. Now his nights are plagued by vivid nightmares of the house by the lake. Despite these dreams, or perhaps because of them, he decides to return to Sara Laughs, the Noonans' isolated summer home. In his beloved Yankee town, he finds himself falling in love with a widowed young mother, who struggles to keep custody of her 3-year-old daughter. He is also drawn into the mystery of Sara Laughs, now the site of ghostly visitations, ever-escalating nightmares, and the sudden recovery of his writing ability. What are the forces that have been unleashed here - and what do they want of Mike Noonan?
©1998 Stephen King, All Rights Reserved (P)1998 Simon & Schuster, Inc., All Rights Reserved
Surnaturel Horreur Fiction Fantasy
Afficher plus Afficher moins

"The witty and obsessive voice of King's powerful imagination." (Amy Tan)
"What King lacks in professional polish he makes up for with an infectious enthusiasm that will lock in listeners for the long haul." ( Publishers Weekly)

<U>Bag of Bones</U> is probably the most complete and satisfying Stephen King novel I have <I>heard</I> to date and the fact that it is read by the author is a big plus! Stephen King will be the first to tell you that he isn't a "professional voice" but as he happens to be the author of the book (duh!), his knowledge of the characters, not only what they say but also how they say it is, as they say, priceless.

<U>Bag of Bones</U> is a ghost story, a love story, and a "whodunit and why" murder mystery all rolled into one. It is also a story that leaves the listener in doubt about the chosen sides of many of the characters right through to the end of the novel. Complemented by sound and music, with lyrics by the author, the audio version of this book (I have both read and listened to this one) is the far superior way to experience the story.

I used to not like Stephen King, but lately I've gotten into some of his more character-driven works, and found that when he concentrates on the characters instead of the beasties, he's pretty darned good. Even with this new respect for him, I was surprised by the quality of this novel. Everything works in it, even King's reading of it.

The book is sad through much of it, as you will guess from the first line, so don't listen hoping for a cheerful experience. But the characters are complex and the presentation of the local town where most of the story happens is observant and detailed, and King takes his time developing the mystery. He doesn't even introduce the mystery until far longer than you'd think possible. Still, it will captivate you until he does, and throughout, and not just through the mystery, but through the character interactions and even the moral questions raised.

This book has several layers of story, from the horror story to the romance to the backstory that is slowly developed. Through it all there is a mythical and psychological element to have you working out how much King meant to be metaphor, not just story.

Excellent book. May just change your opinion of where Stephen King fits in the world of literature. This is the type of book that when you finish, you won't want to start another book for a while, because you won't want the taste to leave you.

My favorite Stephen King book - ever

This is not just a story that keeps you on the edge of your proverbial seat - although it does that in places. The characters are developed, the plot thickens and the noverl is worthy of in-depth critical analysis - not just a review in the local Gazette. Gore was kept to a minimum which is important to me - I enjoy the psychological angle - a la Hitchcock. A few other reviewers did not care for King's narration. I enjoyed it. There is a quiet, matter of factness with underlying sadness. I hope he writes another book with this type of thoughtfulness.

One of his best

I have been a fan of Stephen King's books for quite a while and have to say that Bag of Bones is one of his best! Somehow, I missed reading it when it first came out, but am so glad to have purchased the audio version recently. I love to hear Stephen reading Stephen. He makes me feel as if I'm sitting right in front of him, in his living room, listening to him spin his yarns just for me. I feel every flinch, hear every sound, as if I'm right there in the story with him. Very Good book and a necessity for any Stephen King fan.

Read by Steven King the way it was intended.Once you get into to it it just keeps giving. Unlike some of his other work that just dies at the end. The interconnection of events and the way he lays it out is great

Everything Works In This Story

Great writing, with a deeply moving storyline. Psychological terror as it progresses -I held my breath at times hoping the inevitable would not happen with people I cared about. Everything works here- the narration by Stephen King is amazing.

Every once in awhile I come across a story that stays with me long after I read (listen) to it. In this case- if you don't listen- you will miss so much! I had listened to this one a long time ago, and for some reason failed to write a review. I re-listened last week, and enjoyed it just as much, if not more, the second time around.

The ghosts are terrifying, the cabin is spooky, the lake scared me, and some of the people too. Pretty amazing for a story that starts out with a tragic and sad storyline. King can send chills up my spine with the most innocent of events, no gore or slashing required.

Say what you will, the recording is fabulous!

Stephen King goes gothic. It is also, as far as I know, the first time this author has attempted to write a romance. Of course, don't expect anything close to Harlequin. For one, it's about a million times longer. King tends to go on a bit when he doesn't need to. However, if you are a King fan you probably won't be too disappointed.

Recording: I found the best part of this book, by far, was the recording. King reads this himself, which means he knows exactly what it should sound like. He has also used music to enhance several areas of the novel.

Weakness: This isn't an edge of your seat book. It starts slow and never takes on a breakneck pace.

This is a book for people who enjoy a slow-paced ghost story that takes advantage of a remote and spooky environment.

King of writing not reading

Stephens King's book "Bag Of Bones" is a good piece of writing. The story is rich and well developed, about a successful writer, perhaps somewhat autobiographic, but Stephen King as the narrator was about as entertaining as a highschool history teacher. At first the idea of having Stephen King narrate was exciting, but trying to listen to his monitone rendition and even stumbling over some parts made it hard to concentrate on the story . King can write but leave the narrating to the Professionals. the writing would get five stars but since this is an audio book, 2 stars.

Have read it twice now...

First, I love it when Stephen King reads his own material. I have listened to this book twice now. The story is fabulous!

Without doubt Stephen King's best! I have listened to it three times since it came out and enjoy it more with each experience. This is perhaps his most "autobiographical" book as he uses the character of a popular fiction writer to express what might well be some of his own deep-seated fears in life. Although his narration obviously lacks the polish of some of the truly great narrators, his voice gives the story an amazing authenticity that draws you into Western Maine and the lives of his characters. And, of course, it terrifies with his best.

It is a great story! I Listening to it read by Stephen King himself was awesome! I like his voice and how that intensified the story.

Slow start, but wow for the finishline!

I have not had many audiobooks where I waited for so long for it to catch me, I Thim I was at chapter 10 or 12 before the book caught me. But I was sure it would get there - and wow, once I got past that very slow start, I could hardly stop again!!
Not sure if I think Mr. King is the best reader of his stories, but even that grows on you, so now I could not imagine any other reader for it...!
Nice also with an interview with the author at the end of the audiobook, it made me actually want to start over again, so I might better appreciate the slow start.

it is seldom that the author reads his own book, yet... there is only one Person in the world who Can so it the right way... the writer him/herself. and He done 2amazings Jobs. writing and recording. loving it

This must be the greatest Stephen King novel ever. It's plenty scary without being ridiculous. The story is awesome and the characters are very well developed. The best thing probably is that King reads it himself!!!

A very scary book. I loved it.