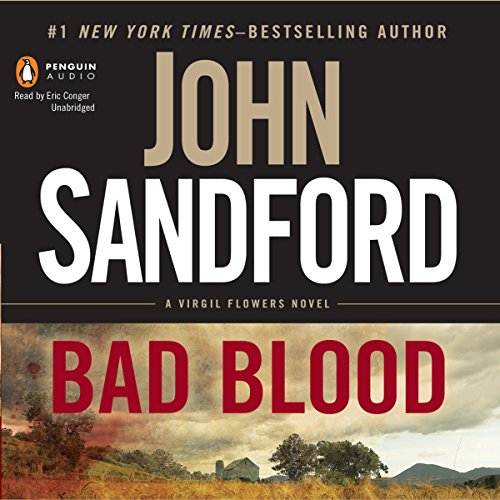 One late fall Sunday in southern Minnesota, a farmer brings a load of soybeans to a local grain elevator - and a young man hits him on the head with a steel bar, drops him into the grain bin, waits until he's sure he's dead, and then calls the sheriff to report the "accident". Suspicious, the sheriff calls in Virgil Flowers, who quickly breaks the kid down...and the next day the boy's found hanging in his cell.

Remorse? Virgil isn't so sure, and as he investigates he begins to uncover a multigeneration, multifamily conspiracy - a series of crimes of such monstrosity that, though he's seen an awful lot in his life, even he has difficulty in comprehending it...and in figuring out what to do next.

I think this is Sanford's best book yet. It is definitely the best Virgil Flowers book I've read. The flow of the story is perfect. Frighteningly, it is very believable and well researched. Unfortunately, these type of issues do exist to some extent. He put together a great mix of mystery, thriller, action, suspense and even some romance. Eric Conger did his usual good job with the narration, especially during the big scene. He made it come to life and make it a real white knuckle event. I Highly recommend this book.It is one of the best credits I've used this year!

That f---ing Flowers. Gotta love him.

John Sandford has kept me pleasantly engrossed with the Prey series of books. I am grateful that he saw the opportunity to create a spin-off series based on one of Lucas Davenport's cohorts.

Since the first Virgil Flowers book, I have been faithfully looking forward to each next one. Bad Blood is as enjoyable as its predecessors, and has left me wanting more.

Don't Start With This... Go Earlier In Series!

Hey... this is a totally good listen. More a police procedural than a mystery, it's still fun to take a ride with Virgil Flowers around the cold-weather cults. But to both get the nuances re. Flowers' character and to not ruin (there are spoiler alerts throughout this book) earlier Flower novels that are GREAT listens... Enjoy this Sanford novel AFTER the others in the series. Eric Conger is so comfortable that I've come to believe that he IS Virgil Flowers... crime solving and woman-loving cop. And the women are his bright, strong, equals. Hey... I gave it five stars.. so... I say... listen to Bad Blood, but do it in the order that Sanford's written these books. You'll thank me, or thank Sanford and Conger when you do.

Virgil Flowers is for real

This outing with Sanford's laconic Virgil Flowers solidifies the characters as one of the best in current police procedural fiction. Down-to-earth rogue Virgil is smart and sensible with an honest feel for the people of small town America. The smooth pace takes you from point to point, with Virgil always a step or two ahead. My new favorite character!

I'm a fan of John Sandford books, yes; now I'm a fan of Eric Conger's narration, too. Enjoyed both the story and the narration; always waiting for the next Virgil Flowers story...

Exciting to the end

I love that f****** Flowers! Once again John Sandford delivers another exciting Virgil Flowers novel. The beginning, middle and ending was great. Kudos to the narrator as well. Can't wait for the next adventure.

I had a hard time starting this one. The beginning is a lot of last names and info that just comes at you Maybe it was just me but I had a hard time with the first half of this one. Stick with it though. About halfway through the pace picks up and the pedal stays to the floor for the rest of the novel. Great book. I still like Davenport better than Flowers, but he's growing on me.

This story involves multi-families in a multi-generational religious cult. It involves murder, adultery, incest, rape and child molestation which are what most of the "ten commandments" tells that "thou shalt not" do.

While the mystery of this story begin with the opening paragraph, most of the first half of the novel is an introduction of who's who and what's what, but once the story really gets going, it quickly develops and becomes a good Virgil Flowers investigative mystery. Sandford wisely limits the more graphic descriptions of the really bad stuff and provides the listener with a vivid look at the perpetrators and the aftermath of the bad stuff. Virgil Flowers' investigative style, his likeable personality and his wry sense of humor helps to unravel the people's habits and the mysterious of the cult community's lifestyle.

Narrator, Eric Conger is a gem with excellent performance skills.

I've read a few of Sandford's novels including the Prey series and Lucas Davenport novels. While I like Virgil Flowers' laid-back way and his sense of humor, this storyline was uncomfortable, a little sickening and is definitely a one-time listen for me.

Like a car wreck, you gotta look, but can't enjoy

Virgil Flowers once again heads to rural MN to investigate a series of murders that turn out to be linked to practices within a church cult that include incest, rape and child molestation. Like the previous novels, Virgil's laidback style, likable manner and impecable judge of character help him build ties with the local police, romance women and slowly unravel a truth that is protected by a tightly knit closed community. Unfortunately, unlike the dark content of the other Davenport and Flowers books, the distrubing content of "Bad Blood" makes any ending unsatisfying and my desire to reread the book non-existent. Buy the book to keep up with Virgil, but for me it is definitely a one-time read.

Another good listen by Sandford

Virgil is definitely growing on me although I still prefer Lucas Davenport. I found that I was rewinding alot in the first part of the book because I couldn't keep the names of all the characters sorted out but as the book progressed, it came together. I always enjoy a book that makes me chuckle out loud and that f@*^ing Flowers does just that.