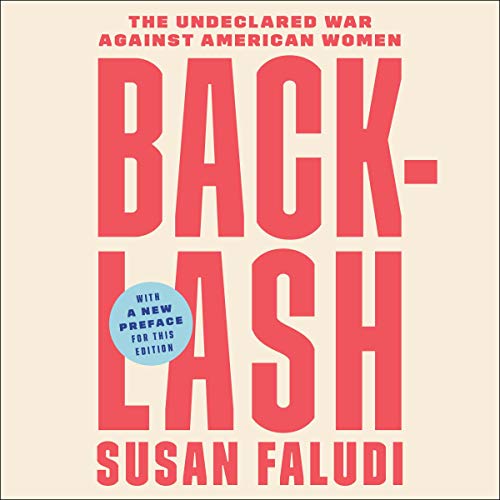 A new edition of the feminist classic, with an all-new introduction exploring the role of backlash in the 2016 election and laying out a path forward for 2020 and beyond

Winner of the National Book Critics Circle Award • "Enraging, enlightening, and invigorating, Backlash is, most of all, true." (Newsday)

First published in 1991, Backlash made headlines and became a best-selling classic for its thoroughgoing debunking of a decade-long antifeminist backlash against women’s advances. A Pulitzer Prize-winning journalist, Susan Faludi brilliantly deconstructed the reigning myths about the "costs" of women’s independence - from the supposed "man shortage" to the "infertility epidemic" to "career burnout" to "toxic day care" - and traced their circulation from Reagan-era politics through the echo chambers of mass media, advertising, and popular culture.

As Faludi writes in a new preface for this edition, much has changed in the intervening years: The Internet has given voice to a new generation of feminists. Corporations list "gender equality" among their core values. In 2019, a record number of women entered Congress. Yet the glass ceiling is still unshattered, women are still punished for wanting to succeed, and reproductive rights are hanging by a thread. This startling and essential book helps explain why women’s freedoms are still so demonized and threatened - and urges us to choose a different future.

"Backlash is the right book at exactly the right  time...This trenchant, passionate, and lively book  should be an eye-opener even for feminists who  thought they understood what has been going on." (Los Angeles Times Book Review)

"The backlash against women is real. This is the book we need to help us understand it, to struggle  through the battle fatigue, and to keep going."  (Alice Walker)

"Withering commentary... This eloquent, brilliantly argued book should be read  by everyone concerned with gender equality." (Publishers Weekly)

Overall, I learned a lot, and came to better understand the sociopolitical climate of my youth, growing up in the 70s and 80s. My only qualm is that Faludi didn't edit the parts that talked about Bill Cosby, and especially her indictment of Yusef Salaam, who has since been exonerated, and was horribly abused by systems that rely on the very ideologies Faludi rightfully critiques. I understand she wrote what was known at the time, but to leave those parts intact in the updated edition, without, at least, parenthetical updates and corrections, is disappointing. I do recommend this book, but with that disclaimer.

Great book, but an editor should go over it again. Far too many errors, especially in the second half of the performance