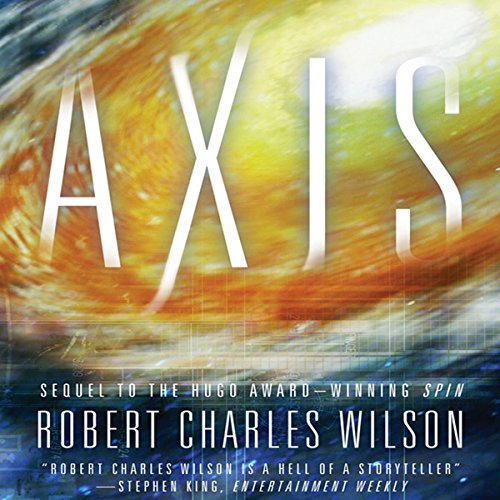 Now, in Spin's direct sequel, Wilson takes us to the "world next door" - the planet engineered by the mysterious Hypotheticals to support human life, and connected to Earth by way of the Arch that towers hundreds of miles over the Indian Ocean. Humans are colonizing this new world - and, predictably, fiercely exploiting its resources, chiefly large deposits of oil in the western deserts of the continent of Equatoria.

Lise Adams is a young woman attempting to uncover the mystery of her father's disappearance 10 years earlier. Turk Findley is an ex-sailor and sometimes-drifter. They come together when an infall of cometary dust seeds the planet with tiny remnant Hypothetical machines. Soon, this seemingly hospitable world will become very alien indeed - as the nature of time is once again twisted, by entities unknown.

"Outstanding....Turk and Lise, who might well be played by Bogart and Bacall, are powerfully drawn protagonists, and their strong presence in the novel makes the wonders provided all the more satisfying." ( Publishers Weekly)

From Hypothertical to Pathetic , let down!

First, I loved Spin. This book while having a few things in common with the Spin is not the same story.

They leave Spin in a great place to start a 2nd book. Instead we get all new characters and a great premise that was wasted.

The idea of what this book could have been.... contact and it's excitement. Instead the author goes preachy and gets caught up trying to make a sociology story showing how smart he is. He tried to downplay the SciFi and go Brides of Madison County on us...
The reason I liked Spin was because of the hypothetical mystery, and the characters motivations to learn more.

Axis has weak characters, no mystery, no big ideas, and a blatant attempt by the author to prove he is just not SciFi. He failed at it.

What was happening when the author wrote this sequel? I listened intently to every word and tried to imagine the characters as they were introduced but they were not as fully developed as the first set of characters in "Spin". The unresolved issue of the Hypothetical s was, to say the very least, disappointing. I had in my mind's eye foresaw the ending a different way and felt cheated with the ultimate outcome. Why leave the readers with no loose ends tied up? The explanation was like the name suggests...hypothetical. No-one knew, no-one was willing to fully explain and no-one seemed to care after 2 books and a dozen or so characters were possessed with finding an answer. It seemed like a least one would have been given the answer to all the mysteries and held on to the info maybe for another sequel.
I did enjoy listening to Scott Brick read this novel and at times I was on the edge of my seat in anticipation, but not often enough.
Note to writers: please don't ask readers to invest in novels that even you don't know how it should end.

I liked the first book, Spin, and I really wanted to enjoy this one but the story simply lies flat. This book starts on the new world merged with Earth via the last book with new characters, but there is no compelling plot or characters. sorry. I did like the first one though...

I don’t really have much to say, I am overall pretty disappointed in this book.

I liked Book 1 (Spin) but Book 2 is not holding my attention, I don’t really find it that interesting, I feel like its flip flopping - but to be fair it’s probably because I am not devoted to the story.

I’m three quarters of the way done, so I’ll stick with it; I am passed the point of no return but I doubt I’ll bother with Book 3 (Vortex)

Regarding the narration, objectively Scott Brick is good however his cadence is very distracting to me. I keep listening to HOW he is saying things as opposed to WHAT he is saying – considering I am not that into the story, it doesn’t help!

Some of the questions you wanted to know are answered, and some are not. The problem is that the main question "what are the hypotheticals" is not really answered". First part of book was hard to get through and the ending left me feeling cheated.

OK but not terribly exciting

3, maybe 2.5 stars. I had difficulty maintaining my interest in Axis. It just seems very slow and tedious. I often felt like saying, "Enough already with everyone's thoughts and feelings, tell me more cool sci fi shit." (But I never actually said that out loud.) RCW has ideas. I would like a novel from him that is a little shorter and loaded with cool, weird ideas. Despite my low/avg review, I will read Vortex some day.

Scott Brick is an OK narrator, but his phrasing can be a little monotonous and irritating at times.

What would have made Axis better?

Not sure what exactly would have made it better, but it was missing something. Maybe the hypotheticals needed a little more fleshing out?

Has Axis turned you off from other books in this genre?

He has a compelling voice that always makes every sentence sound profound.

I liked the first book in this series. It wasn't great, but it was a very intriguing idea. After reading the first book I wanted to know the reason behind the Spin and thought the second might shed some light on the subject. But Axis was really more about life on Equitoria and how some renegade Fourths turned the Spin into a religion.

I loved the first book - Spin, and expected more of the same from the sequel. While this is still a great character novel, it unfortunately simply has much less actually happen throughout the book. Part of this is because it covers a much shorter time span than the first novel did, but with that aside it still lacks any significant events to drive the characters forward.

If you loved the first book, you'll still enjoy this one, but fair warning, it doesn't quite live up to it's predecessor. I'm starting the third one now and hopefully that one improves upon this.

A "must read" for Spin fans.

After reading several negative reviews from Audible customers, I almost passed on this sequel to "Spin." I'm glad I didn't, as I truly loved it. As Tyler and Diane Dupree cross the mysterious archway into a new world at the end of "Spin," we are left wondering what happens next. This book delivers the answers to our questions in a highly engaging manner. To those familiar with the "Spin" universe, this book makes perfect sense, and it does a great job of continuing to slowly reveal the extent and true nature of the Hypotheticals. Although it picks up the story many years later and Diane Dupree is the only returning character from the original, the novel nonetheless achieves its own high level of excellence.

This was so hard to get through. I actually put it on 1.25 x speed, Hoping to fast forward to something interesting. This speed made the ponderously slow and sleep inducing narrator palatable. Although I was still annoyed at how he would be inaudible one sentence , then blast out the next sentence. Very hard to listen to in the car. I stopped rewinding to hear what I missed because the characters were so dull and two dimensional, and they trudged through such Interminable dialogs of nothingness, that I realized I wasn't missing anything.. By the end it seems there is only one interesting thing revealed about the aliens, which happens to be repeated in every chapter, in every thought of every character- to the point where I stopped caring. Seriously this could have been condensed down to a half hour short story.

Good book, narrator not my cup of tea

The book is not Wilson’s best but it is really enjoyable. The narrator is okay but sometimes talks in a peculiar way that I didn’t always like.