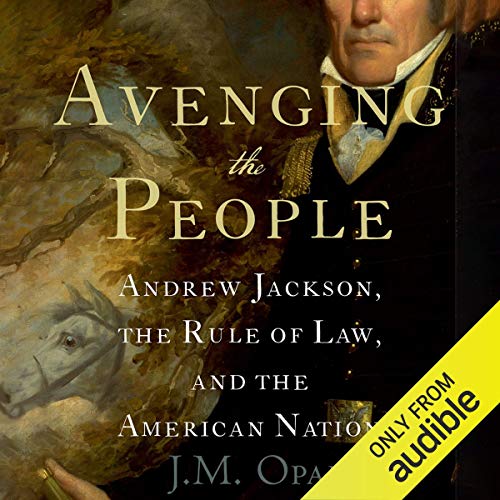 Most Americans know Andrew Jackson as a frontier rebel against political and diplomatic norms, a "populist" champion of ordinary people against the elitist legacy of the Founding Fathers. Many date the onset of American democracy to his 1829 inauguration.

Despite his reverence for the "sovereign people", however, Jackson spent much of his career limiting that sovereignty, imposing new and often unpopular legal regimes over American lands and markets. He made his name as a lawyer, a businessman, and an official along the Carolina and Tennessee frontiers, at times ejecting white squatters from native lands and returning slaves to native planters in the name of federal authority and international law. On the other hand, he waged total war on the Cherokees and Creeks who terrorized western settlements and raged at the national statesmen who refused to "avenge the blood" of innocent colonists.

During the long war in the south and west from 1811 to 1818, he brushed aside legal restraints on holy genocide and mass retaliation, presenting himself as the only man who would protect white families from hostile empires, "heathen" warriors, and rebellious slaves. He became a towering hero to those who saw the United States as uniquely lawful and victimized. And he used that legend to beat back a range of political, economic, and moral alternatives for the republican future.

Drawing from new evidence about Jackson and the southern frontiers, Avenging the People boldly reinterprets the grim and principled man whose version of American nationhood continues to shape American democracy.

A sharper, scarier view of early USA than I had

Wow! Seeing this, I realize what a shallow postcard image my mind had of USA's beginnings. This place was chaotic in a legal sense as well as a sense of physical hazards. It is a complicated path from a "state of nature" to settled land titles and from the sense of property-as-first-right-of-possession (of course, requiring dispossession of the existing locals) to transferable debt instruments held far from the land involved, and enforced by absentee owners through lawyers. Being a lawyer would invite as much hostility then as (I have experienced it to) recently. This is a fascinating approach path too -- through situations into personalities, centrally Andrew Jackson's. He spanned all these roles and, given his colorful and combustible nature, in ways entertaining as well as enlightening.
Here, the stories are vivid, yet factually precise. The deft, yet sober style reveals countless nuances of ideas, the life then, and people. The listener is rewarded at turns with sharp explorations of the roots of law, culture, politics, rhetoric, and the popular press. Just as the Founders did, the reader is led to consider the examples of great thinkers and orators going back to the Romans and even the Hebrew Bible, as these informed and shaped the thinking, speaking and acting of these pioneers on a stage of (sometimes bloody) action. In short, this book provides a deep education.
The story deepens into ever-bloodier scenes as Jackson's always self-involved personality evolves from resentful and fiery to a pathological and ghastly hue. There is no one (aside from his beloved Rachel, though his regard is often only his own fantasy projection), trusting in him or otherwise, he will not betray on his path to glory, all lit with homicide. He has no problem snatching some orphaned native child and sending him off to Rachel as a "toy" for his own adopted white son. He has no problem changing the script on his volunteers for his own vainglorious frolics beyond their original missions and contracts (always into more genocidal mayhem), and threatening deserters from this with death (and sometimes having it dealt out). Every principle becomes a rallying cry to violence, served up with very conscious lawyerly public-relations twist. I shudder, looking into this dark mirror, that this man was elected our president. He makes the much more humorous and many-faceted (!) Donald Trump look like a mild-mannered milk-toast, like the nicest guy you ever met. Only the vast error-absorbing (and blood-absorbing) openness and pre-media silences of this land absorbed this endless wake of suffering and self-absorption. The worst part is what this says about our forebears, to lift him on their shoulders. If USA, by its luck or divine favor or whatever, could survive this horrid man, we might make it through our present straights. The author is careful to note the misbehaviors of the natives, so this is no white-wash. That gives this a damning credibility. This was harder and harder to listen to. Nowhere outside of eastern Europe in the 1940s have I heard of such scenes. And yes, the Nazis consciously absorbed, and excused themselves by, plenty of these examples.