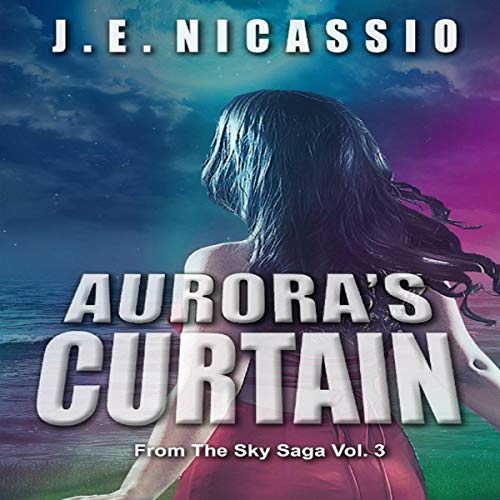 Unanswered questions are revealed in the final countdown!

When Samantha Hunter is taken deep beneath the Archuleta Mesa into the Dulce - a joint human/alien underground testing facility - her only hope for survival is Gloria, a human abductee, and Ruby, a hybrid German Shepherd. There, she undercovers the unthinkable - secrets the US government has been hiding for decades!

Aurora’s Curtain is a fast-paced science fiction thriller that will make listeners question everything they believe about life on other planets and a love that knows no bound!

A note from the author: Aurora’s Curtain: The final book in The Beyond Moondust Trilogy is told in first person Sam’s point of view and limited Lucien and Gloria’s point of view, unfolding the story through their eyes.

Some things are better left unknown

Aurora's Curtain is a fast paced well written book that has aliens, hybrids, suspense and intrigue. Sam again proves she just as strong as the aliens even though she is human. The range of alien characters is amazing. The storyline is strong and in this day and age believable.I received this audio book upon my request and I am voluntarily leaving my honest review.

I still did not like Sam in this book however, it was deffinately a lot better then book two.

thing's aren't always what they seem

This book of the trilogy was awesome up to the end. then you have the grrrrr moment.

This book starts where the last one leaves off. Thing's that Sam thought she knew, is nothing like reality. Even the love of her life didn't know.

Take a trip down the rabbit hole with Sam and the Foster's, as this trilogy comes to an amazing end. ( side note: I hope there is a spin off to this story)

OUT OF THIS WORLD!!

This was a fast paced, action packed, you wont see this coming final book in an out of this world trilogy!! The last several chapters had me experience hope, heart ache, love, and excitement all at once!! I couldn't stop listening to this one!! This final book will throw you in so many directions you will think you have it figured out but you have it all wrong!! I'm so excited for anyone else to read/listen to this series! It was seriously spectacular!! I can't wait to see more by this author!!

I want to note that Holly Holt did such an amazing job on this series and this one really made her shine! She portrayed not just Samantha but also Lucien and Gloria throughout this book! She spoke clearly and at a great pace throughout the whole series and to be honest this is the first time in a while I have had a narrator I did not have to speed up or slow down, her pace was perfect. There were a few spots where you could hear the page being turned but that did not bother me in the least.

I requested and was given this audiobook complimentary at my request and have voluntarily left this review with my honest opinion.

Wow!! A twist I didn’t see coming!! Well I kind of had and idea it was going that way but wow it was unexpected when it was all revealed. Definitely recommend this!!!

I really enjoyed this series! The narration was excellent! The author did a great job with the character builds and plot. I look forward to reading more books from this author. I was given this free review copy audiobook at my request and have voluntarily left this review.

This is a very well written series. The only flaws I found were a couple sound editing mistakes and the narrator mispronounced a few words.

Without giving away any spoilers, the third book in the Sky Saga trilogy wrapped up the book in such a surprising way that I never would have guessed this ending. Samantha and Lucien were interesting and their story was captivating. The narrator, Holly Holt, spoke clearly and was easy to understand and, voiced the characters in a consistent manner from book to book.