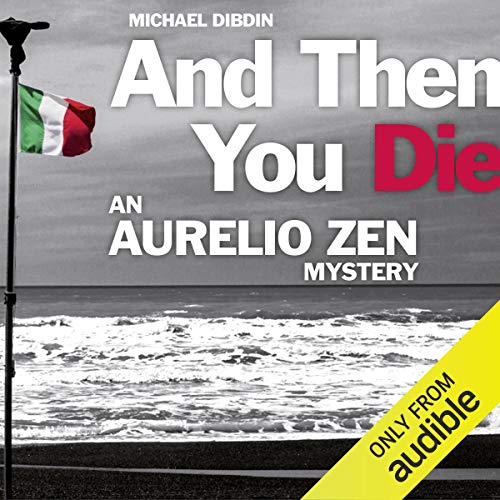 Aurelio Zen: And Then You Die

Aurelio Zen: And Then You Die

Aurelio Zen of Rome's elite Criminalpol is back, but nobody's supposed to know it.

After months in hospital recovering from a bomb attack on his car, he is lying low under a false name at a beach resort on the Tuscan coast, waiting to testify in an imminent anti-Mafia trial.

Zen has clear instructions: to sit back and enjoy the classic Italian beach holiday - relaxing in the sun, eating seafood and engaging in a little mild flirtation with the attractive woman sitting under the next umbrella. But Zen is getting restless, and as an alarming number of people are dropping dead around him, it seems just a matter of time before the Mafia manages to finish the job it bungled months before on a lonely Sicilian road. Abruptly the pleasant monotony of beach life is cut short as Zen finds himself transported to a remote and strange world far from home...and wherever he goes, trouble follows.

Michael Dibdin was born in 1947. He went to school in Northern Ireland and later to Sussex University and the University of Alberta in Canada. He lived in Seattle. After completing his first novel, The Last Sherlock Holmes Story, in 1978, he spent four years in Italy teaching English at the University of Perugia. His second novel, A Rich Full Death, was published in 1986. It was followed by Ratking in 1988, which won the Gold Dagger Award for the Best Crime Novel of the year and introduced us to his Italian detective, Inspector Aurelio Zen. In 1989 The Tryst was published to great acclaim and was followed by Vendetta in 1990, the second story in the Zen series. His last novel, End Games, was published posthumously in July 2007.

When women were not involved, Cameron Stewart's voice is excellent. However, the squeaky high pitched sound he uses for women is dreadful. Instead of imagining a lovely sexy young woman your mind conjures up a pantomime dame, an old crone - it is really awful. He - or an editor - should really have listened to the recording. It is a shame to ruin a good story and an otherwise excellent reading with such a hideous interpretation of a female voice. As a woman I feel insulted.

Who would you have cast as narrator instead of Cameron Stewart?

Simon Pacey perhaps; you need someone familiar with Italian pronunciation though, and I am not sure he is. Michael Kitchen's strange narration of other Zen books are awful too. This is a man with a lovely voice and great ability as an actor but his slow, halting reading is no good either. I will just have to read the books instead.

After several novels, one comes to appreciate just how capable a writer the author was.
The stories are very well written, lyrical often, informative and often funny..not your usual crim lit fare. Hurrah.

BUT - although I know it is far too late because the novels are quite old and the chance of a revival has been lost with the cancellation of the TV series (Rufus Sewell was a magnificent "Zen")..nonetheless, Audible producers of the Now please take note - this Actor is not up to the job. His woeful attempts at Italian are sustained and embarrassing, his characterisations are pitiful. If I hadn't been so committed to the author I would have given up.. how insulting to make every female Character's voice a caricature/pantomime !
They all sounded like a 10th class actor attempting an imitation of a person in drag.

It's far too late to salute Michael Kitchen for his great voice actor job of sharing the earlier stories with wit and individuality..and honouring the tone the author wrote in. So sad.